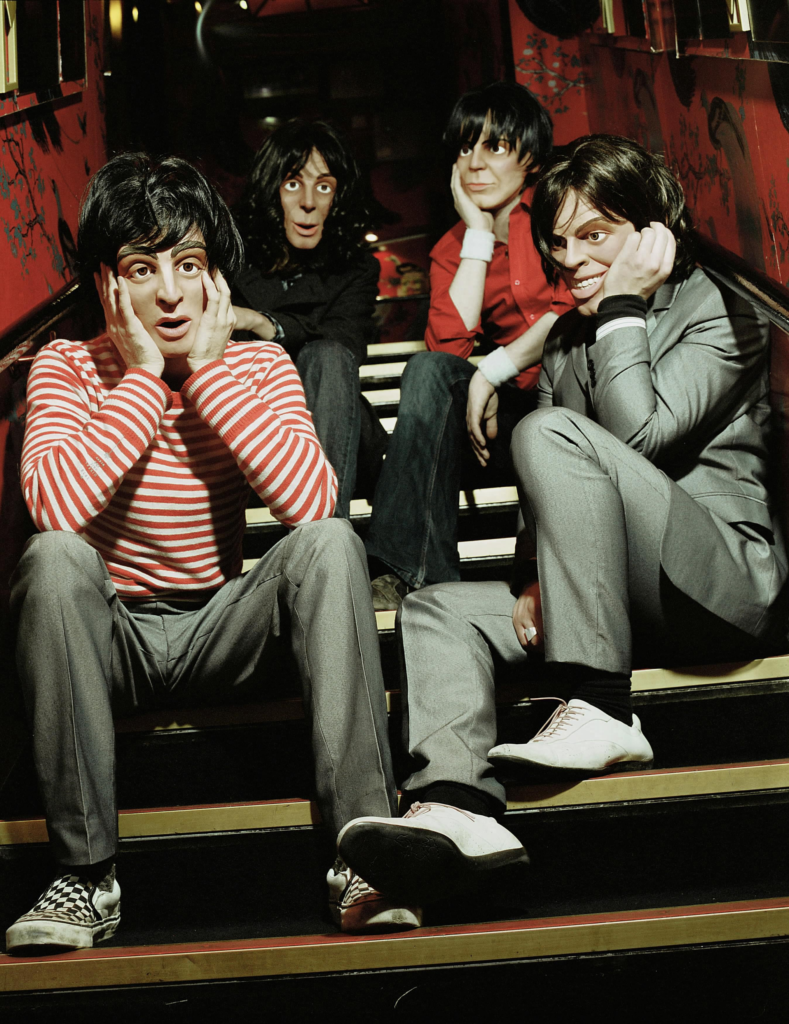 “Rebel in You” by Supergrass, from Diamond Hoo Ha (Astralwerks):


It’s been said that Oasis was the new Beatles and Supergrass was the new Monkees, but now it’s the other way around. Twelve years after the height of cool Britannia, no other band from Britpop’s ’90s division has continued to make more varied, inventive and entertaining records than Supergrass.

While Oasis treads predictable but profitable water and Blur remains fractured in a chaos of side projects and reunion drama, Supergrass gleefully plays with the best bits of glam, punk, ’70s pop and psychedelia as if were still a band of teenagers. Its music surprises and satisfies listeners at the same time — and the band’s sixth and latest album, Diamond Hoo Ha, is another serving of rich comfort food.

How can you grow up and keep rocking? The question is as tired as a new Status Quo album, and the answer usually involves things like speed, volume and sunglasses. But Supergrass has a more personal answer: Maintain the spirit of innocence that made its early records sound so fresh in the mid-’90s. Regardless of tempo or decibel level, the band is at its best when it sounds like it’s having a blast, as on its fizzy 1995 debut, I Should Coco; 2002’s kaleidoscopic masterpiece, Life on Other Planets; and the new album.

“It’s more a lack of wanting to be really professional,” singer, guitarist and sideburns cultivator Gaz Coombes says. “It’d be strange if we were to kind of set up some huge light show and cordon off areas for us to walk through backstage. We don’t see a lot of the industry that the enormo-bands see. There’s a lot of really big bands that are down-to-earth and manage to keep it together, but there’s an innocence in not taking things too seriously and getting too professional.”

Sure, Supergrass gets world-weary sometimes. It would be weird if any group of men in their 30s didn’t. The results, though no less musical, can be less engaging and exciting. The moody 2005 album Road to Rouen was born under a cloud of crap, including the death of the Coombes boys’ mother (Gaz’s brother, Rob Coombes, plays keyboards in the band) and an ugly tabloid mess involving rumors of wife-swapping between drummer Danny Goffey and actor Jude Law. It was the closest Supergrass had ever come to breaking up.

“I think we probably all felt like it at some point,” Coombes says. “I remember just feeling focused on the record. Danny, as a friend, was important to me, but I knew the best way through it was to let him sort it out and not be somewhere where he didn’t feel happy. I just thought, We have to finish this record.”

The members of Supergrass have been best friends and bandmates since they were teenagers, Coombes says, so sometimes the only way to transcend the shit is to rock out.

“It happened again recently when we got together for rehearsal after 17 months,” he says, referring to the practice sessions for Diamond. “We were just, like, sort of a silly gang making each other laugh.”

Perhaps Diamond‘s winning youthfulness also comes from recording where some of the young Gaz’s favorite records were made: Hansa Tonstudio in Berlin. Longtime Coombes idol David Bowie recorded “Heroes” there, in the shadow of the Berlin Wall. It offered a serious contrast to the rural and home studios that Supergrass has traditionally used.

“Yeah, Berlin’s a really vibrant place to be in, especially for a month,” Coombes says. “We really wanted to soak up that environment and atmosphere. We knew these songs had quite an urgency about them, an energy and rawness. It helped the album get somewhere you won’t get if you’ve got time to settle in for country living.”

“It was hard to tell at times where he wanted to push it,” Coombes admits. “We’d done some demos with three mics on the drum kit, a very live feel. As the session went on, it got complex at times, sonically. But he [Launay] was great at picking out the strong points, looking at each of us, trying to get us to play together really well instead of sort of constructing the album with overdubs.

“That’s what this record’s all about: exploring what we’re good at. Always being true, always being honest, not going, ‘Let’s do an R&B record this time.'”

Coombes cites the latest single, “Rebel in You,” as one instance when song and production complement each other. Never content to deploy one hook where three or four will fit, Supergrass crams decades of cool into four minutes — pumping glam piano and disco bass on the verse, surging guitars on the chorus, some space-age keyboard sounds on the breakdown, woo-oo-hoo whoops all over the place and a quintessential Supergrass melody that’s both offhand and sophisticated.

If Supergrass was an odd fit for Britpop — too young, too funny, too unpretentious — it’s tempting to wonder how the quartet would be received as a new band today. Certainly it has been name-checked time and again by younger, punky-poppish sensations such as tourmates the Arctic Monkeys.

“We played with Arctic Monkeys, and it was great,” Coombes says. “But they’re nothing like us onstage. They said themselves that we were a big influence on them, which is cool, but they have their own character and attitude. It’s a great compliment that there were records we made that had an impact when they were growing up.