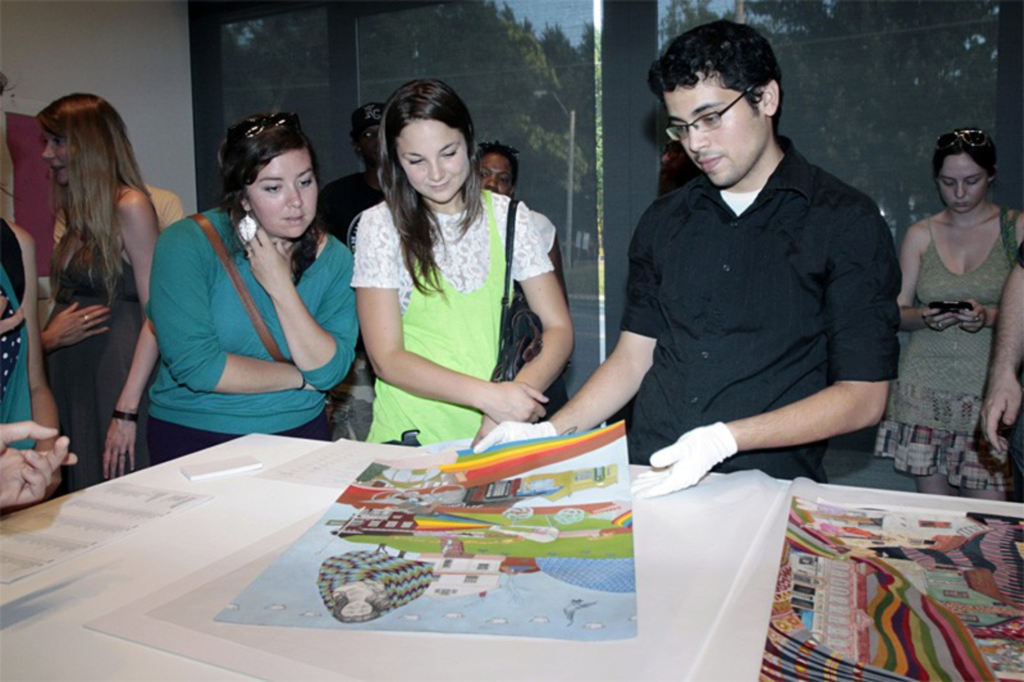 It’s a hobo’s armpit of a summer night in Missouri, and the vestibule at H&R Block Artspace is packed with damp, overheated visitors shifting artist guides and plastic cups of wine between their hands amid a rolling fog of perspiration. People crowd into the main gallery, gathered around the twin viewing stations that constitute the storage and display schema for the pieces contributed by 180 artists to this exhibit, 2010 Kansas City Flatfiles. Many of the people here tonight appear to be defying the prevailing climate — economic and seasonal — by shopping seriously for art.

Such a big crowd challenges the exhibit’s already unconventional protocol. Provided with an alphabetical list of artists with corresponding file numbers, viewers ask to see flat files, and the gallery’s art handlers oblige by removing the files from cabinets under the viewing stations. The linen-gloved gallery assistants then open the files and carefully page through the artists’ works, displaying those of each artist individually. Because so many people have packed into the gallery, there’s a palpable group pressure to keep things moving along, meaning that a viewer might have only a few seconds to look at each piece.

I was early enough to beat the rush and, among other things, I was able to see a fantastic print by TV’s Peregrine Honig. In a gorgeous symmetrical composition that evinces her delicate and scrupulous draftsmanship, two well-coifed male heads are serenaded by Blur’s “Girls and Boys,” the song’s lyrics handwritten in a typeface that we might as well call Peregrine Sans-Serif. But now the party is in full swing, and the art handlers are as busy as bartenders. Already edgy with claustrophobia, I’m feeling conspicuous with my notebook. I just know that people are trying to read it over my shoulder, a suspicion that later turns out to be absolutely true. I compensate by writing as sloppily as I can. (About Honig, for instance, I scrawl: “Draws with graphite and ink and affection.” In retrospect, I’m not totally sure what I meant by that, though she displays an evident affection for the subjects in her artwork.)

Confirming my suspicion that people are reading my notes, a charming artist named Lynne Hodgman sees me writing a few things about her art: “Terrific work?” she says, looking at my notepad. “Thank you!” This is exactly why I don’t keep a journal. In fact, she has completely misread the first two words written in my terrible handwriting: Textile with simulated scribble glyphs, it says. The work is quite terrific, though. Hodgman simulates ancient documents with fragile rectangles of fabric covered with precise rows of faux glyphs, like artifacts from a Jorge Luis Borges story.

My notes continue: Superficially, they look the same, the way Eggo waffles all look the same — torn edges, varied glyph forms, small differences appear in the details. We’ll just let a punitive comparison of her work with a delicious breakfast treat stand as reward for her nosiness.

Works on paper flip by, among them Paul Smith’s black compositions, impastos of ink bearing the texture of the screens through which they’ve been printed — “They smell fresh,” says a tiny woman wearing overdetermined eyeglasses. Then come retinal flashes of Linnea Spransy’s mixed-media abstractions — her characteristic conjoining of organic forms with sweeping linear elements, the contrast of painterly color washes and sharp geometrics — in a rapid-fire paper montage. Shawn Old’s brown-ink abstractions of crazy tendrils and bursts of color suggest spontaneity, though his technique, recalling Jackson Pollock, is quite controlled.

At this point, a middle-aged man with a snowy-white ponytail pushes in front of me and barks at the gallery assistant: “Maria Calderon.”

“Do you have the file number?” comes the response.

Turning, he spies my gallery guide and snatches it without any time-wasting eye contact or tedious adherence to the social contract. Finding Calderon’s name, he says, “Number 14!”

Later, taking a free wine break outside, I write a few childish and unflattering things in my notebook: Ponytail douchenozzle: enormous head — needs to wear a big foam suit in order to appear proportional. STEALS MY ARTISTS’ GUIDE! Holds forth at length about the work — doesn’t even know the people he’s spouting off to.

But now the better angels of my nature alight on my head, or whatever, and I’m going to demonstrate personal growth and maturity by accentuating only the positive aspects of our exchange: The gallery assistant, whose name is Francis Rivera, produces Calderon’s flat file, containing hand-drawn realist collages in gouache, graphite and ink. The pieces combine sharply observed portraiture with familiar Kansas City landmarks, which the man helpfully identifies to two women with whom he has been holding forth about the art. Shoving my guide back at me, he turns now to a woman standing at my right and says, “Great work, Maria!” And I completely agree — an excellent basis for a lasting friendship, if you think about it. With a toss of his magnificent ponytail, my large-headed new friend disappears into the crowd.

The works of paper on the gallery walls only hint at a deeper, denser exhibition, one archived just below the surface. As an exhibit and ontological challenge, this grouping of 180 artists adds up to a daunting challenge for anybody’s notebook.