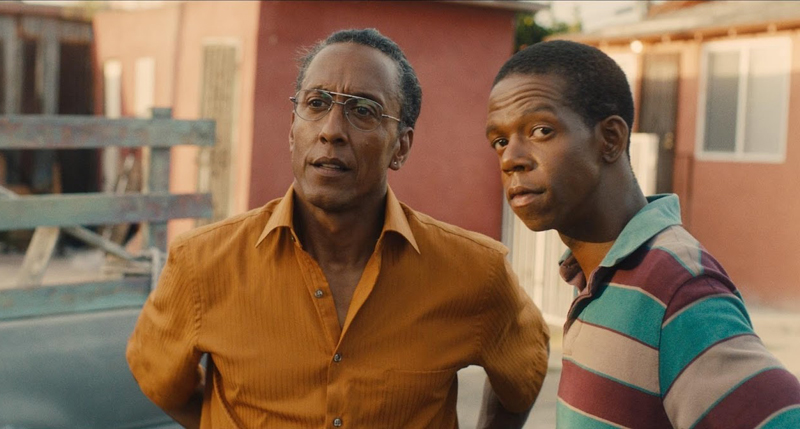 In a President-elect Trump world, movies that have long seemed mere fantasy have suddenly become relevant in unexpected ways. So it is with a heavy heart that, for new reasons, I recommend Paul Verhoeven’s misunderstood 1997 satire, Starship Troopers.

More than a sci-fi action movie, it’s a clever adaptation of Robert Heinlein’s pro-militaristic novel that takes the opposite stance, peppering it’s space adventure with federal sloganeering and disinformation. Between gratuitous violent scenes of attractive young recruits (think Melrose Place in helmets) being torn apart by giant alien bugs, Verhoeven illustrates a happily fascistic society in which citizens unite under falsehoods, encouraged by racial hatred. Rent or buy it now on iTunes, Amazon or Google Play.

The Screenland Armour’s Arts and Crafts Festival brings together new independent cinema with local brews and live music for three days. Tonight at 8 (and at 5:30 p.m. Sunday), the extraordinary (and newly Independent Spirit Award–noninated) drama Hunter Gatherer screens. Starring Andre Royo (The Wire) as an ex-con trying to regain footing in his old neighborhood, it eschews all the trappings of the genre and attains a deeply affecting surrealist tone. It’s a true original from first-time filmmaker Josh Locy, and this festival marks the only time to see it locally. Full schedule at artscraftskc.com.

Get to the Arts and Crafts Festival early today and see Untitled, the 162-minute cut of Cameron Crowe’s unmatched paean to ’70s rock, Almost Famous. It’s on the big screen at 1 p.m. Stick around at 5:15 for another 2016 festival favorite, Anna Biller’s perfectly wrought genre elevation The Love Witch, about a woman who uses spells to lure men into falling in love with her. In addition to writing, directing, editing and scoring the movie, Biller designed all the sets and costumes herself to ape 1960s Technicolor films, while shooting on gorgeous 35mm film. The result turns the exploitation formula on its head, using purposely stilted acting and the audience’s collective notion of the past to support modern feminist ideals.

Director Rob Lehr will be in attendance for a 3:15 p.m. Arts and Crafts screening of his new documentary, Thunderdome, which profiles his quest to cope with PTSD by building a Nerf arena in his backyard. Mackenzie Davis (Halt and Catch Fire, Black Mirror) and Caitlin FitzGerald (Masters of Sex) headline the road-trip horror-thriller Always Shine, which also uses genre to elucidate matters of ego and sexism. The film, which has been described as Single White Female meets Ingmar Bergman’s Persona, shows at 3:35. A VCR board game comes to life in Beyond the Gates, a tribute to the VHS era starring B-movie horror legend Barbara Crampton (Re-Animator), showing at 5:10 at the Arts and Crafts Festival.

Terror attacks are normal, the rich are insulated from the poor, and national borders all over the world are closed in Alfonso Cuarón’s brilliant, dystopian 2005 film, Children of Men, which seems like urgent, required viewing for progressives today who feel like giving up. Women have somehow become infertile, and a broken-down Clive Owen responds with a defeated shrug while xenophobia and isolationism run rampant in this immersive tale. But even in the darkest of hours, humanity can find a glimmer of hope, and Owen rises to the task of preserving the human race’s continued existence when no one else believes its possible. Rent or buy it now on iTunes, Amazon or Google Play.

The only post-2000 Christmas movie so far to qualify as a bona fide classic is Jon Favreau’s irresistible 2003 comedy, Elf, starring Will Ferrell as an overgrown human raised as one of Santa’s helpers, who reunites with his Scrooge-like father (James Caan) in the charming holiday environment of downtown Manhattan. All month, the Alamo Drafthouse is hosting screenings of its Elf Movie Party, which shows the film and features movie-themed props such as jingle bells and bubbles, Elf-themed contests, and a snowball fight in the theater. The first Elf Movie Party of the season was December 4, but if you missed that, there’s another tonight at 7:15. Do it again at 7:30 p.m. Sunday or 7:15 p.m. Wednesday, December 14.

Looking for a new series to stream over the holidays? Shut Eye, set in the world of Los  Angeles storefront “psychics” and organized crime, has a decent pedigree. It arrives on Hulu today, forgoing the usual week-by-week release schedule in favor of a full-season, 10-episode rollout all at once. A drama with a darkly comedic tone, Shut Eye stars Jeffrey Donovan (Burn Notice) and Isabella Rossellini, is produced by two Breaking Bad alumni, and is written by Les Bohem, a musician who played with cult band Sparks in the 1980s.