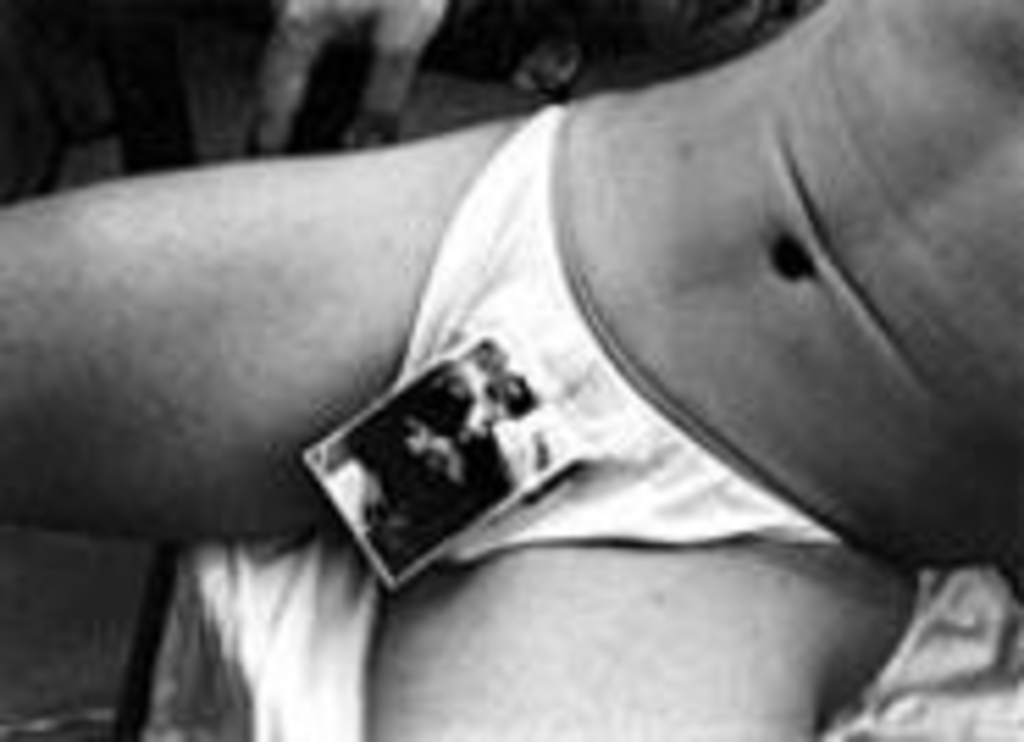 Where do you go to see an artist in swim trunks?

This isn’t a joke or a riddle. You go to the pool. Not a pool. The pool.

I’m not allowed to tell you where it is, because most of the people who go there aren’t the apartment residents who are supposed to get exclusive access to this sunbathing spot.

A guy we’ll call Flynn is writing a script about this pool. He’s clocked in for the day. By “clocked in,” I mean he’s marked the time of his arrival on a small dry-erase board that carries the names of all the regulars like a list of employees who must report their hours. Actually, the word regular doesn’t do Flynn or his companions justice. They’re full-timers. “We’re a bunch of people who can come to the pool on a daily basis and who don’t ask one another what we do for a living,” Flynn says. And it’s a good thing he says so, because that would have been my next question. Touché.

Today, Flynn sits under the umbrella of a wrought-iron patio table with friends we’ll call the Duchess, Tattooed Mark and Johnny Smalls. He opens a copy of The Kansas City Star, which has been left for him by a downtown bartender whose role is to bring the paper. Dude shows up at noon with the paper and hangs out until 3:30, enjoying his friends’ cigarettes and beer. He leaves the paper when he goes to work.

A very tan Flynn, in his sunglasses and knee-length orange trunks, turns immediately to the funnies. “What’s in Marmaduke?” asks the Duchess. “He’s chewing on a broom, and someone asks if he’s flossing,” Flynn answers. He busts out laughing, and the Duchess points at him, gloating. “You laughed at Marmaduke!” she yells.

Flynn’s face falls instantly, a transition that couldn’t have been better executed by the master of such moments, John Goodman himself. He stares at her over the top of his sunglasses. “I laughed facetiously,” he says. This, he tells me, is how they read the funnies together every day. The funnies are followed by the horoscopes. It’s 4 p.m. on a Tuesday.

On any sunny day, the full-timers might be joined by a rotating cast of characters who are sometimes here. We’ll call them regulars. The regulars include a couple of painters, a graphic artist and a bunch of skaters. Regulars with places to go and people to see might visit less frequently, but they all treat this as home base. None of them knew each other before coming here. They gravitated to the pool independently of one another, drawn by an invisible magnet of illegitimacy.

One regular, a guy we’ll call Mick, lives in a warehouse, where he makes huge, sleek-looking metal items, most of them commissioned. His girlfriend, whom we’ll call Elizabeth, has a day job, and she just finished writing a novel. Elizabeth thinks the pool is about people watching. She thinks the residents of the surrounding buildings would be bored if she and her friends didn’t provide a little spectacle.

The Duchess supports Elizabeth’s claim. “The normal people” — meaning those precious few with permission to be here — “stare at this end of the pool,” she reports. Not that it’s clear why anybody would stare at, say, a guy painting another guy’s body with icing. Nothing to see there, just a guy who can’t keep his hands off his own birthday cake. It started with the application of a simple mustache, and eventually he was running around covered head to toe. You know, typical poolside behavior.

Shenanigans aside, this isn’t a free-for-all. These guys may be trespassing, but they rarely seem to remember that. The first time I came to this pool, longtime loungers were keeping an eye on some newbies. These skateboarders, they informed me, had no respect for the rules. Before, they had brought dogs. They had stayed until midnight, blaring music after hours. “Pool closes at 10!” someone proclaimed, jabbing an instructive index finger into the table to make a point. I looked over and saw the offending skaters floating peacefully in the water. “We come here and talk about everything from Rembrandt to pissing in the bushes,” one full-timer said, a hint of concern in his voice. “We have intelligent conversation.” Full-timers and regulars consulted with one another. It was important to make sure shit didn’t get out of hand.

But that’s all blown over. The newbies have come to understand that, in place of official pool rules (don’t bring cats, do wear a bathing cap), there are unofficial pool rules. There are rules that one breaks, such as the one that says poolgoers must reside in one of the surrounding buildings to gain admittance. And there are rules one must not break, such as letting one’s dog swim.

So here we all are, half-naked, discussing pole dancing, Picasso, the painting career of Tony Curtis, the cinematic interpretation of American Psycho, the cost of hot dogs, and the collective risk of melanoma.

First Fridays are debated as a political candidate’s qualifications might be. The Duchess is in favor of First Fridays; Flynn is against them. The Duchess says they’re fun, whereas Flynn expresses his disapproval by making a jerking-off motion while swooning and saying, “First Fridays!” He prefers to go to the Nelson and look at lily pads.

One night after dark, a painter named Michael orchestrated a photo shoot, for which some male regulars brought art big enough to cover their dingdongs. You know, their wee wees. They all stood naked — with the exception of Flynn, who wouldn’t take off his shirt (but who did agree to pose naked from the waist down) — covering their you-know-whats with art, like so many soccer players defending goals.

Michael — a faux finisher whose own work is highly figurative and, he says, “reminiscent of the Renaissance and Dutch schools” — will be a pool dropout within a couple of weeks.

“I won’t be attending anymore,” he says. “The devil is there laughing at me when I go. I don’t get anything accomplished. It’s a void in society, a void in Kansas City life…. You can’t enjoy it, because the whole time you’re thinking you should be getting work done.”

Another subject of debate here at this off-limits pool is the question of who gets to be called an artist.

I don’t know, and the question might — just might — seem absurd in this particular setting. Is one person sneaking into the pool more acceptable than another?

As the legend goes, an artist who supported himself working a job that didn’t come with a 401(k) got in an argument with the artists from wealthier backgrounds. He told them that wealth and art made strange bedfellows, that he’d always had to struggle to make ends meet, that the struggle was part of the craft. Flynn got up off his pool chair and applauded him. A painting student who already had sold some work — though his parents were paying his rent — chimed in to say he couldn’t paint as much if he had to work a regular job. Was one kind of artist more legitimate than the other?

We call these irreconcilable differences. But eventually, everyone swims together.

The day ends when someone pisses off the Duchess, booming, “You’re out of your fucking element!” Not realizing that the speaker is quoting a line from The Big Lebowski, she reaches her limit for abuse. She stands up, announces that she’s leaving, she’s had enough. Before going, however, she kisses everyone on the cheek, and as she walks through the gate, she calls back, “See you guys later!”