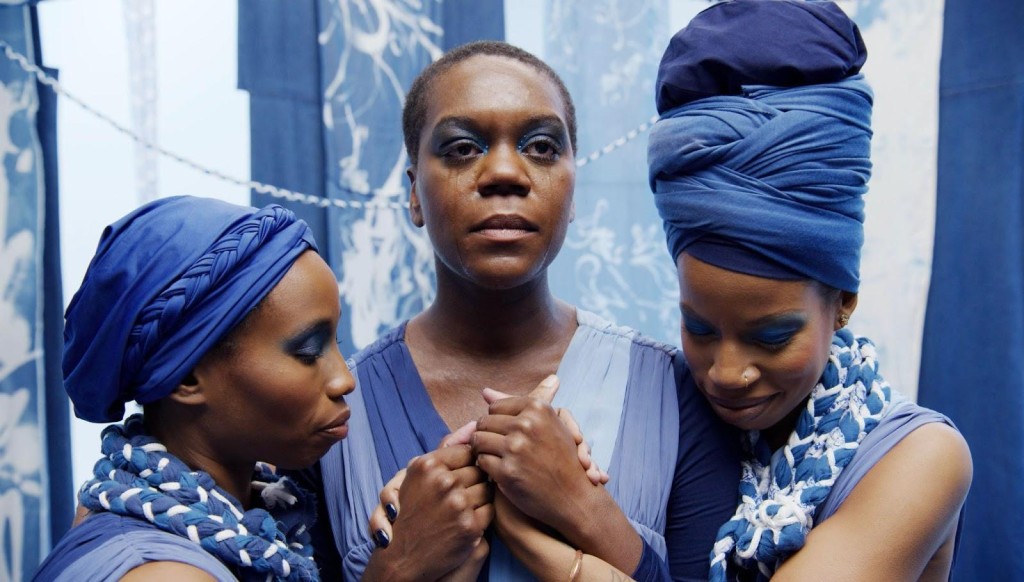 Painter and sculptor Shinique Smith first performed Breathing Room in 2018 for Kansas City Open Spaces. Since then, the show has evolved over time to include a film version as well as many different live incarnations. The latest, Breathing Room: Evocation, will be hosted at the Nelson-Atkins Museum of Art June 11 at 11 a.m.

The show is presented by the Nelson-Atkins and the Nerman Museum and was created especially for Juneteenth.

“I feel grateful to collaborate with these institutions and this audience, to work in this city, and to work with performers who are also from Kansas City,” Smith says.

Breathing Room: Evocation will incorporate dance, song, and fabric using indigo cloth and denim. Smith identifies these elements as the means of expression for three central themes within the show.

“It’s the way it involves call and response, breath, and songs,” she says. “And it’s a gesture of mourning and honoring that culminates with—I hope, at the end of it all—a release for the performers and the viewers in the audience. I wanted to create a space and give room to connect with a kind of guttural spirit related to ancestry and love and loss. I feel this color evokes that. So it’s called Evocation because we’re calling things forth. We’re calling forth a motion, calling forth ancestors and honoring them and letting things go.”

Much of Smith’s work has a spiritual component. When she was a child, she met the Dalai Lama at the Tibetan Cultural Center. She believes that this experience has created a metaphorical thread that runs through her work, in addition to the actual, literal threads that make up so much of the materials that she uses.

Some of Smith’s art has more political and cultural commentary than others, but her use of fabric does tie into her belief that the world has a problem with overconsumption. She gives scrap fabric a new life by incorporating it into her sculptures and emphasizing the significance of clothing. Smith even makes her own textiles, some of which will be featured in her Evocation performance.

“I’m overall inspired by this material as one of humanity’s greatest inventions that weaves through our lives and through our language and the way that we can conceive of time and relationships,” she says.

Smith’s fabric collection began with her grandmother’s linen closet. Most of what she uses is given to her by people that she knows, which she uses to create artwork that she sees as a sort of time capsule.

The Breathing Room series isn’t the only tie that Smith has to Kansas City. STARGAZERS opened April 21, 2022 at the Nerman Museum.

“A lot of it was created within the last couple of years, most of it within the span of time of quarantine,” Smith says. “So there was a lot of time spent looking and manifesting the work. There’s a lot of spiritual energy wrapped in the work and angst. Several of them [the paintings] were created blindfolded. And then there’s a lot of drawing in the show.”

Evocation includes some elements that Smith attests are built within a medium she has never before shared with the world.

“There is one piece that’s an installation,” Smith says. “It’s basically looking inside my mind. It’s like my little multiverse. It’s like looking at my mind, and I incorporated all my drawings and journal entries from the 90s. So it really represents 30 years of thought in that one piece, and I’m proud of that.”

Breathing Room: Evocation will be hosted at the Nelson-Atkins Museum of Art, June 11, 11 a.m. – 11:40 a.m. All events and exhibits at the museum that are part of their Juneteenth celebration will be free to the public.