Artist Greg Summers paints Kansas City as it once was 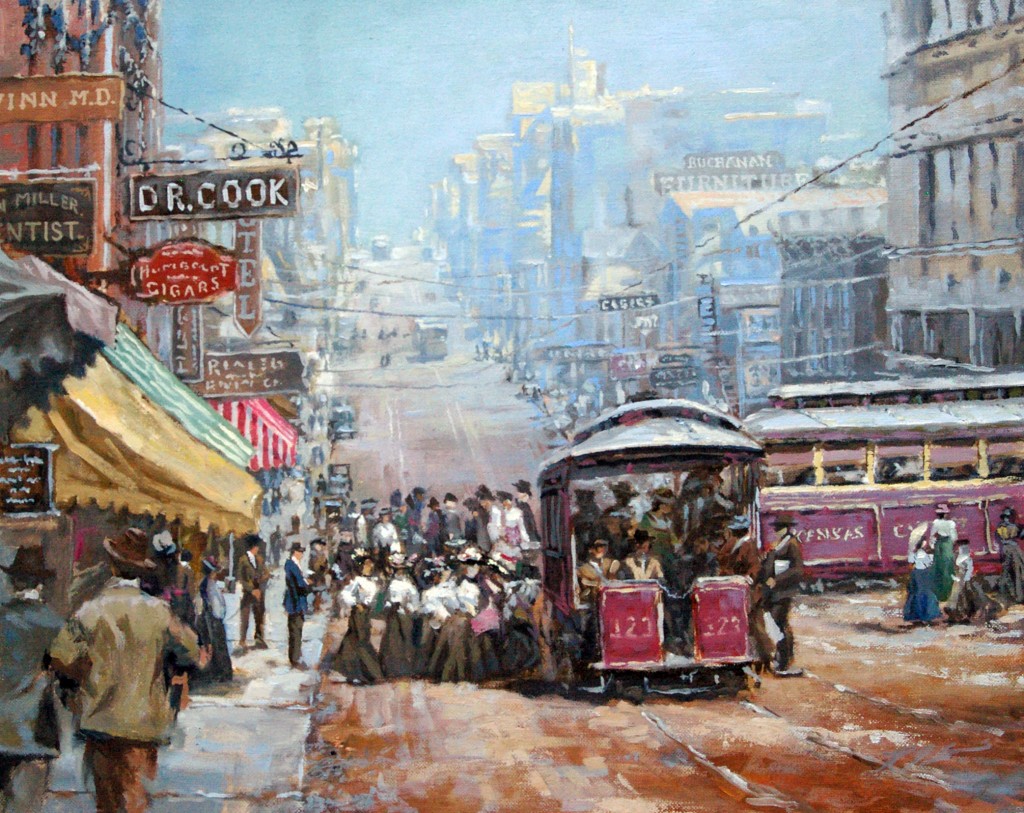 “See Them Passing By,” one of Summers’ works, reimagines a past view of 12th Street in KC. // Courtesy Greg Summers

Greg Summers has been a professional artist since 1979, getting his first major opportunity with Hallmark Cards as a master engraver. Over the course of the past decade, he has travelled all over the world to hike and paint on location in locales such as the Inca Trail in Peru, the Great Ocean Road of Australia, and across the Pyrenees and Mediterranean.

Summers originally took up his passion for creating vivid outdoor oil paintings as a means through which he would eventually overcome a long battle with alcoholism.

In Jan. 2021, he was dealt another major adversity in his life when he was diagnosed with Multiple myeloma, a rare form of cancer that forced him to undergo chemotherapy and a stem-cell transplant.

Just as he found artistic inspiration through overcoming alcoholism, this development—paired with the quarantine period of the pandemic—led the longtime KC resident to “a new avenue of creation,” as he began researching local scenes to paint and the history behind them.

In Jan. 2022, one year after his diagnosis, he will release many of these images, which he was painted over the course of the last 18 months, in a calendar that can be purchased through his site.

One such work, pictured above, titled “See Them Passing By,” reimagines a scene from 12th Street over a century ago. 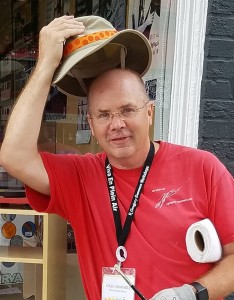 “The name is taken from a song about life kind of passing one by. It’s got the streetcars, too, and so it’s a double entendre of course. But it shows the streetcars and looking down on 12th Street,” Summers says. “12th used to be the dividing line of the first district, which was all the debauchery and all the brothels and bars, saloons and stuff on the north side. South of 12th Street was where the up-and-coming aristocrats were living.”

During quarantine and his treatment process, Summers was unable to make the trips he used to make. With his cancer causing a plethora of pains along his back, he may never again be able to lug all of his gear around with him on future trips, if he makes them.

Instead, he’s found solace in learning more about KC history, a place he’s lived in since 1960. It started through Google, where Summers would web search certain parts of the city to see what they once looked like, and the history behind those places.

“I had this a lot of extra time since I wasn’t traveling, traveling around the country. And so I saw all these black and white photos, and they’re cool to see but I thought I’d try to paint them in order to bring them a little bit more to life,” Summers says.

In the process of doing this, Summers has also been able to highlight just how much certain aspects of the metropolitan area have changed over time.

“You find all these amazing things about this city and the structures and how, how, not just buildings and stuff change, but even even the geography of the place. How the rivers switch back and forth on the land, how that city is gone from uphill, from up and overlooking the river to when they took they out most of the cliffs and the land down to the level of the river,” Summer says.

Above all else, Summers hopes his work inspire others to learn more about their birthplace or adopted hometown.

“I want to share my love for the history of this city with the people in a way that can’t be found in photographs. I have been painting this city for a long time, and this has helped me in recreating some of these paintings of KC, and trying to give it that feel as though one could have been there. My colors are not always accurate, or the number of windows in old Union Depot correct, and that doesn’t bother me. I would like for someone when they look into my paintings, they get that sense of time and space,” Summers says.

Summers work can be seen locally at the Rice Gallery in Overland Park and at Parkville’s Cathy Kline Gallery.

“I love history and think we can learn from it. Hopefully I can make people see, and ask new questions. That’s what got me looking and searching. We’re an old Cowtown, no reason to really hide from it, run with it and enjoy,” Summers adds.