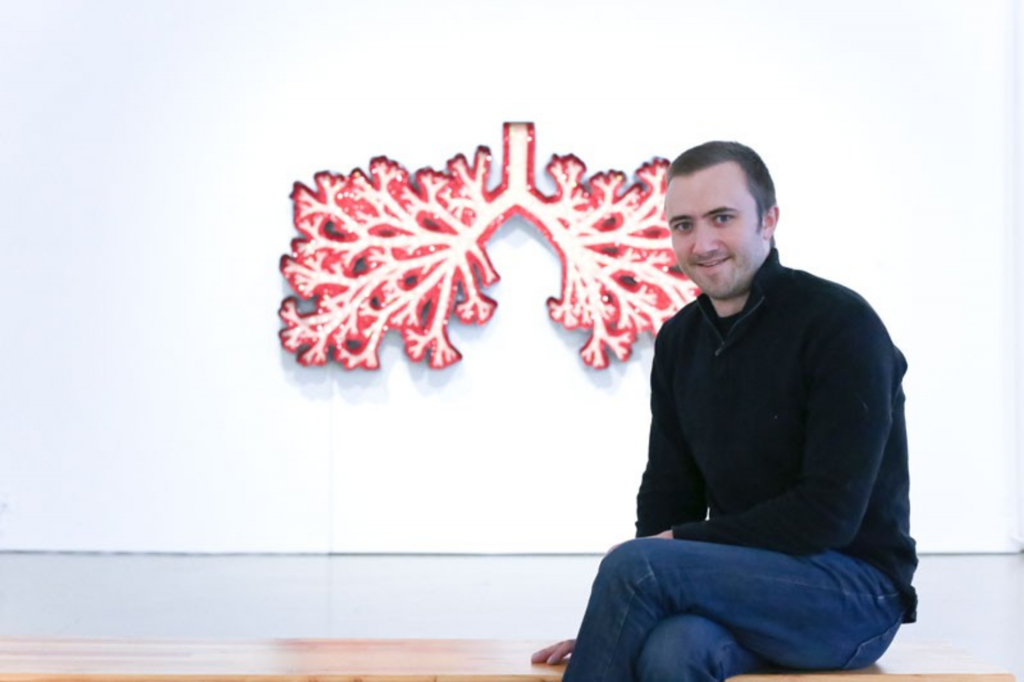 Dylan Mortimer poses with artwork from a gallery show. Mortimer received a double lung transplant in 2017. // Courtesy of Dylan Mortimer

Dylan Mortimer is an artist living with cystic fibrosis. He has created artwork seen by thousands of people on walls across the country. He has headlined gallery shows, has commissioned work, and supported himself as a working artist. Most importantly, Mortimer has inspired others through his creations.

Mortimer also received a double lung transplant in 2017 due to his cystic fibrosis.

As a patient, Mortimer has spent plenty of time in hospitals and knows all too well the emotionless architecture of health care facilities: the flat, colorless artwork hung within the walls of hospitals to serve as an unintentional reminder of the sterility of the surroundings. He knows how these vapid environments can sap the little joy a patient possesses after undergoing treatment.

As he’s done before, he’s using his creative talents and it’s for the betterment of strangers by working to change those dull hallways and hospital rooms.

“When we talk about hospitals and overall care of people, it’s not just the patients. This is broader than that,” says Mortimer. “So the hope, obviously, is that it will have an impact for people fighting CF but beyond that too, because everybody needs help.”

Mortimer was awarded an Impact Grant by the Cystic Fibrosis Foundation for his project I Can Imagine, which helps adults living with CF create unique representations of their living experiences through virtual art sessions.

The Impact Grant will provide up to $10,000 of funding per year for up to two years to individuals and nonprofit organizations within the cystic fibrosis community who are leading projects to support people living with the disease.

The grant is a massive step in easing the financial burden off artists like Mortimer so they can focus on creative or logistical obstacles in the process.

“Employees, patients, and everybody within a hospital are all about it,” Mortimer says. “But it becomes sort of fighting for all the red tape of it, which goes back to the reason why you see such bad art and it’s because they don’t want to spend much money on art because of all the reasons we expect. Should that money go towards healthcare supplies, medical equipment, staff? Yes, but at the same time, this is important too. So the grant is now a way we don’t have to have that be a roadblock anymore.”

Art as a way to inspire:

The artwork that is being created will be completely unique to the artist’s interpretation. But Mortimer says he hopes the artists will find inspiration from the idea of ‘healing.’ Specifically, what healing might look like across multiple levels.

“On a cellular level, on multiple levels for interpretation,” says Mortimer.

The benefit of exposing patients to artwork, images, or representations as a way to manifest positive benefits in a patients’ experience in hospitals is already established. In fact, a Dutch study conducted in 2017 concludes that the presence of visual art in hospitals contributes to health outcomes by improving patient satisfaction as an extended form of health care. 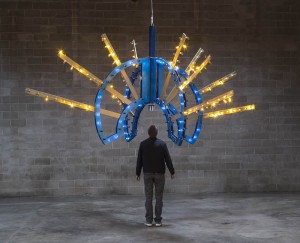 ‘Large Halo’ is an installation by Mortimer. // Courtesy of Dylan Mortimer

Currently, Mortimer has close to a dozen artists in mind as the initial team for the beginning of I Can Imagine. He envisions the project taking on a group of two to ten artists in different cities to help create and install a culmination of their vision. But COVID protocols have presented a unique obstacle in facilitating the logistical planning of the project. Thankfully, the Impact Grant can be renewed for up to two years, which will offer time to fine-tune the project.

The project will benefit a broad swath of society that has had to deal with unexpected hospital visits as of late or had to stay with a loved one. It will also help brighten the mood of those who work in the taxing environment of a hospital—staff who are working tirelessly to help the sick. And it will give hope to those who are diagnosed with CF and help provide an outlet for the frustration of their situation.

If this project can help just a fraction of those people, it will be worth it and Mortimer will have achieved what he intended.

“One way a doctor in Columbia put it to me,” says Mortimer. “I just had some artwork up in my room and he says, ‘what we do is really important—helping keep people alive. But what you’re doing is a reason to be alive.’”

Applications for 2022 Impact Grants will open in January 2022. For more information about Impact Grants, visit here