These small sculptures are on view at The Bunker Center for the Arts through July 27 and they're incisively hilarious. 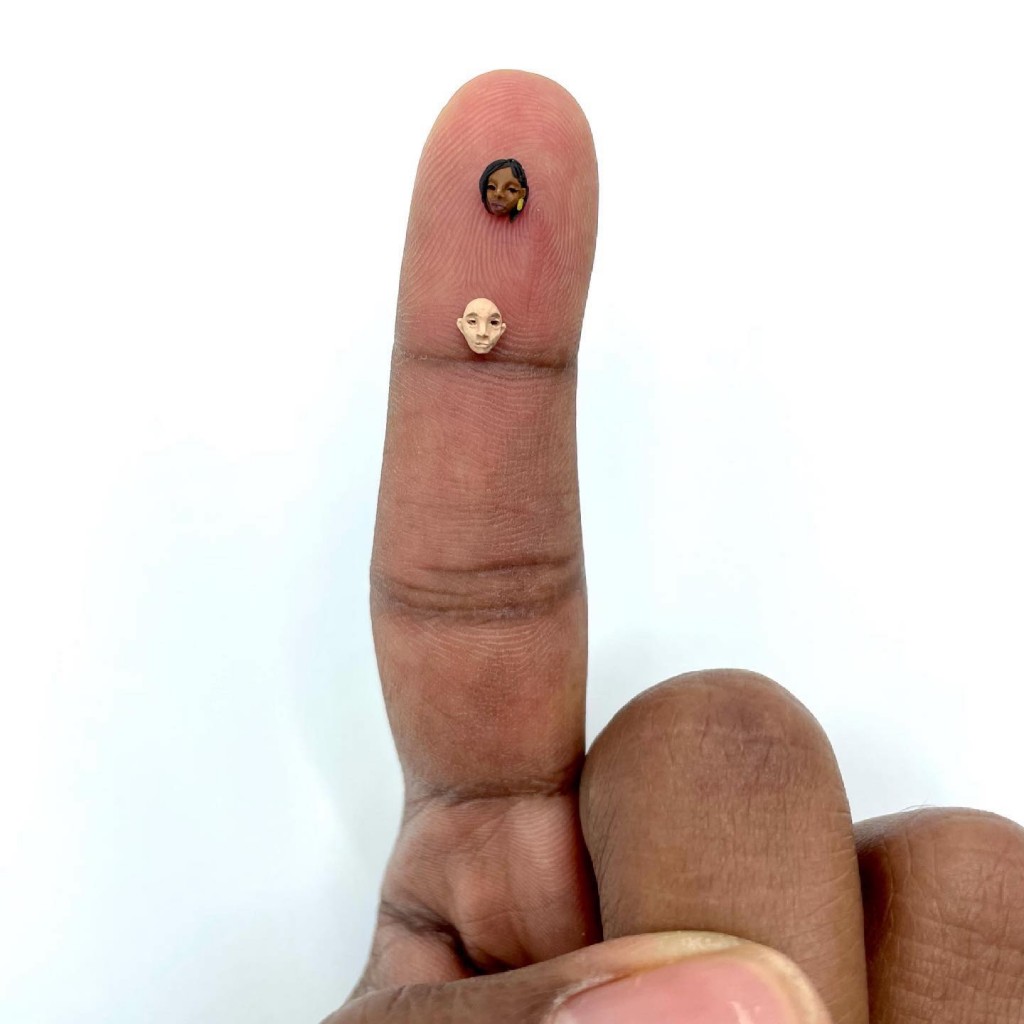 Wolfe Brack is good at appreciating the little things in life. But we’re not talking about particularly sunny days or when the person in front of you at Starbucks buys your coffee. When Brack says little, he means objects that you can hold on the tip of your thumb.

“I’ve always loved small things,” he recalls. “I was interested in insects, the things that get overlooked because they’re so small and most of us don’t have the time to stop and look at them. My happy place is slowing down and noticing tiny things.”

As a self-taught artist and curator, this fixation on minuteness fuels much of Brack’s work. He started making minuscule sculptures as a kid, and as an adult, he’s made money selling one-inch potted plants. 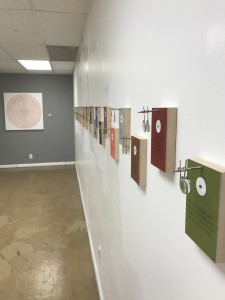 We’ve Met Before by Wolfe Brack is on view at The Bunker Center for the Arts through July 27. // Photo by Lily Wulfemeyer

In the same spirit, Brack constructed two-inch kites. And yes, they could be flown.

Brack currently has a solo exhibition running—his first since 2013—at The Bunker Center for the Arts, which opened June 4 and runs through July 27. At this exhibition, you’ll meet your friends, family, co-workers, enemies, that one weird Tinder date, and even yourself in the form of sculpted faces. The visages are set in white circles on panels painted across the color spectrum. And of course, the visages are itty bitty. So small, in fact, that Brack mounted jeweler’s loupes to the panels to magnify the fine detail that might otherwise be lost to the naked human eye.

Each sculpture is gifted with a name and a one-sentence descriptive quip written on the paint in Brack’s plucky scrawl. The effect is much like Hemingway’s over-used six-word story at its best; Brack’s quips are longer and incisively funny.

Suitably, the show is titled We’ve Met Before. Brack has named the individual pieces “Quirks,” and it takes him anywhere between 15 minutes and two hours to complete a single one.

“[The name “Quirks”] came to me when I was working in customer service. I worked at a Barnes and Noble for years, and we’d have our regulars, and all our regulars would have quirks, and I would start to notice them. And then [I realized], ‘I’ve got to start recording some of them, these are pretty great. I can’t let these go,’” says Brack. 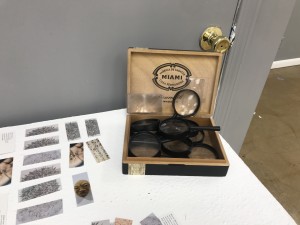 Looking glasses available to visitors of the exhibition, We’ve Met Before by Wolfe Brack. // Photo by Lily Wulfemeyer

As small as the sculptures themselves may be, the exhibition is extensive. On opening night there were 90 pieces spanning multiple rooms. As pieces have sold and other artists are up to exhibit in the space, the show has been consolidated into two rooms bursting with color and humor.

As folks wandered throughout the gallery on opening night, there was an abundance of pointing and leaning over to friends to say, “That’s me!” The “Quirks” may have different names and different faces than our loved (or not-so-loved) ones, but they’re welcomingly familiar all the same.

For example, many of us are Jiali, who definitely got your text, “she just needs a day or five to overthink it and then agonize over her response.” Then there’s Maria, a particularly brilliant little devil, whose “idea of a sexy yet comfortable outfit is a Snuggie with a hole in it.” Cuong, like Brack himself, is a self-professed introvert: He “needs a bit more personal space than most.”

Brack, who hung the show himself, was particularly playful with Cuong’s placement. Most Quirks are hung a few inches apart. Cuong has an entire wall to themselves. 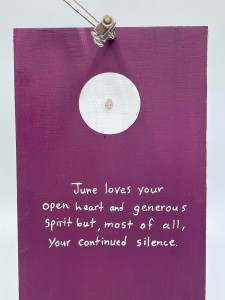 “June loves your open heart and generous spirit but, most of all, your continued silence.” // Courtesy Wolfe Brack

“[Humor] is always in my head,” says Brack. “Sometimes I have a hard time turning the jokey jokes off. It may be my own awkwardness. But also, after all those years in customer service, it’s sometimes hard not to see everything as kind of funny. And that may be a coping mechanism. Probably is a coping mechanism. But in this instance, it’s useful, being able to connect with people through humor.”

Studying all 90 “Quirks” offered an embarrassing gut-punch and the warm embrace of a Snuggie (with a hole in it) at the same time. Brack describes the “Quirks” as “specimens”; they are emotional mediums inviting close speculation of ourselves and what makes us tick, for better or worse. Our most subconscious, repetitive behaviors suddenly look different when isolated in a white circle and examined under a microscope. Or, rather, a jeweler’s loupe.

Even condensed into two rooms, the “Quirks” flow effortlessly from one to the other, in a rainbow of personality and, also, a literal rainbow of colors.

“Omar’s got no time for any nonsense but his own.” // Courtesy Wolfe Brack

“My curation career is pretty new. Only four years old,” says Brack, who is the operations manager and curator at InterUrban ArtHouse. “A lot of times, the shows we have at the ArtHouse are group shows, so there’s a lot of different types of work from different types of artists. They may be so different that the only way I can get them to work is to let the colors and textures play off of each other. And so, for my show that I hung at the Bunker, the colors kind of flow and play off of each other.”

We’ve Met Before also features an ink-on-canvas piece that is tell-tale Brack, even in the name: “22 Tiny Tacos.” The work depicts a city sprawling in 360 degrees from one central point in the shape of a globe. Buildings, faces, and even words are legible from any angle, and hidden in the intricate details are, you guessed it, 22 tiny tacos. (Despite staring at this piece for over ten minutes, I couldn’t locate all of the tiny tacos. I challenge you to go to the exhibition and see if you can find them all.)

Just as there is something universally human about the “Quirks,” the exhibit itself, in its unrushed desire to spill its guts, feels undeniably Midwestern. This was no mistake on Brack’s part.

“I think there’s that Midwestern tendency for people to just start talking to you, to open up. It can be very welcoming,” Brack says. “Or, if you’re stuck behind an information desk working customer service, they see you’re trapped and they’ll tell you their life story.”

Brack is from Kansas City and still remembers our home when it was still a “sleepy little town”.

“[Growing up in KC is] why I probably move at a slower rate through life. I walk fast, but I move through life fairly slowly.” 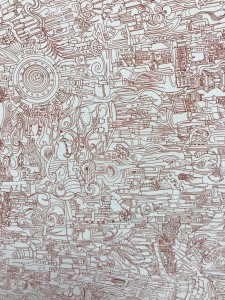 Can you find the tiny taco in this zoomed-in portion of “22 Tiny Tacos”? // Photo by Lily Wulfemeyer

Even with KC’s size and speed turned up a notch in recent years, he says there’s still plenty of the artsy love to go around.

“There’s more hustle and bustle, but [the art scene] still feels like an accessible thing for the most part. There’s a gallery or type of gallery for just about every artist [at] different levels of their careers.”

When We’ve Met Before ends, Brack plans to sell the remaining “Quirks” on his website. Going forward, he also hopes to round out the collection of “Quirks” to an even 100. But his work isn’t just limited to two cubic inches, or even centimeters, of sculpture. To see his wider portfolio including African masks, body paint, and fashion design, check out his website.

In addition to We’ve Met Before, Brack recently installed The Queer Experience at InterUrban ArtHouse. The show “is for all artists, musicians, and storytellers in the LGBTQIA community to tell their stories and share their experiences with the world.” Check it out through July 16.