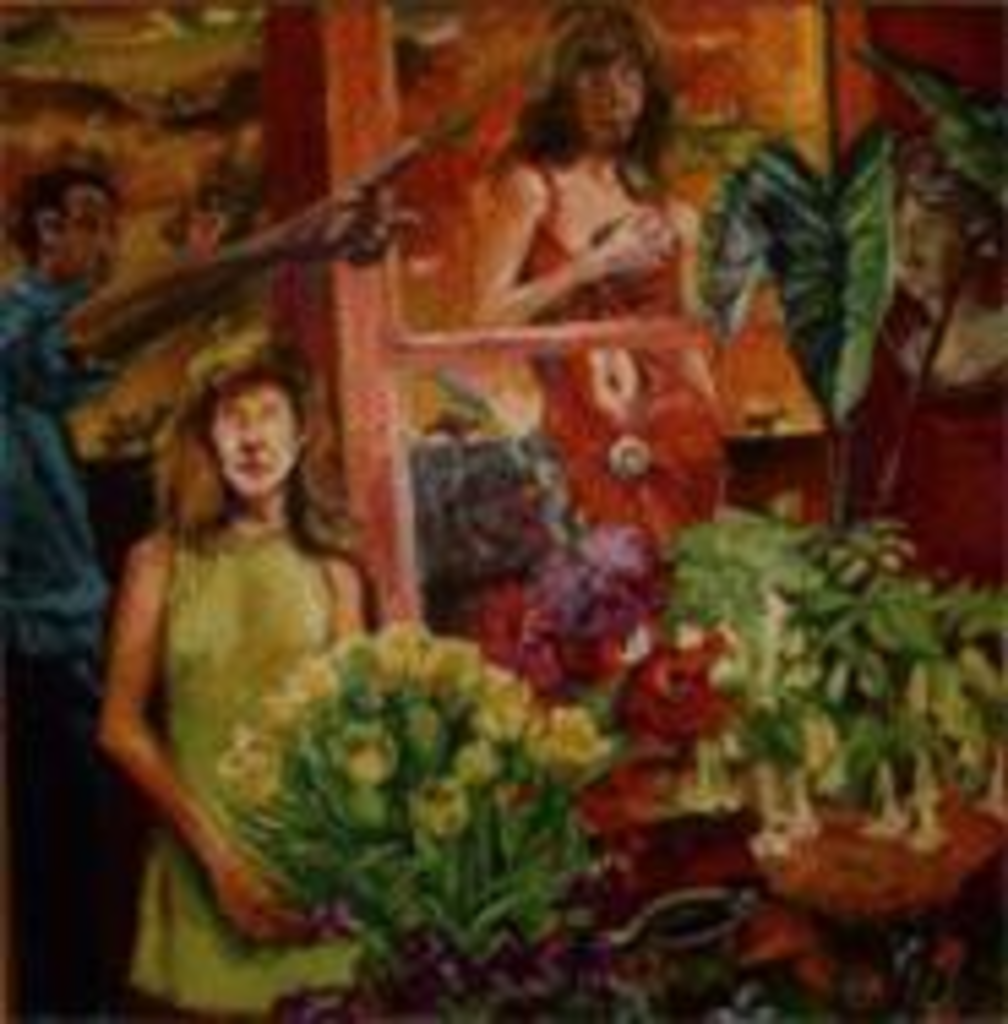 Generations: Ceramic Sculpture and Photography The Graffiti Room hides at the intersection of 39th Street and Broadway, sharing a block with a Supercuts and a video-game repair shop. The gallery’s name is literal, spray-painted onto aged, rusted metal. Inside is a senior-thesis exhibition by the Kansas City Art Institute’s Teri Frame, who obviously delights in using her familial lineage for artistic purposes. Frame’s show consists of nine clay pieces, all slip casts of a male body; mirrors positioned behind each piece reveal decals inside made from black-and-white family photos. In “Crush,” a left forearm and a right hand dangle off a small wooden pedestal, resting like sleeping body parts, and the reflected image shows two people (Frame’s great-grandparents?) caught in a moment of spontaneous celebration. The past imposes itself on the present in these works, implying that one’s family, dead or living, is never far away. By appointment through Dec. 23 at the Graffiti Room, 3905 Broadway, 816-217-8819. (R.T.B.)

Los Malditos Translated as the damned, Los Malditos spotlights the work of Argentinian-born tattoo artist Eduardo Cerro, who moved to Kansas City in 1992. The Mercy Seat is one of many places where Cerro inks skin (he also works at a shop in Monterrey, California, and in St. Louis), and he has exhibited his work on paper in Kansas City at the Green Door Gallery. At the Mercy Seat, nine ink-and-watercolor illustrations appear as enlarged versions of graphics you’d find on a person’s back, belly or chest. The pictures are inspired by “flash” (the art samples that typically hang on the walls of tattoo parlors), and many depict leather-booted females. The complex “Rugged Individualism” shows part of the female anatomy, with two revolvers facing in opposite directions; a horned, goateed and grinning Satan (making one of a couple of appearances in the show) poses like a malicious cherry on top. To add even more menace, the entire piece is dagger-shaped. For those who are too weak in the knees to get permanent art on their bodies, this is the perfect place to at least flirt with that prospect. Through Dec. 31 at The Mercy Seat, 210 E. 16th St., 816-421-4833. (R.T.B.)

New Media Projects: Vanishing Sky The first in the Nelson-Atkins Museum of Art’s New Media Projects series brings the cosmos within our grasp — at least temporarily. (The second installation opens in February, the third in April.) Inigo Manglano-Ovalle’s Vanishing Sky is a computer-generated projection that uses modern technology to showcase the galaxy on three screens. A low and constant vibrating hum (in surround sound) creates the feeling of being trapped in a galactic vacuum, moving either toward or away from the twinkling stars in the distance. As one would staring at the hands of a clock, viewers will sense a slight change, a subtle movement in this homemade sky. All of the elements force us to contemplate things such as the nature of the universe and whether life exists somewhere out there among the thousands of light points. This is simple and profound art, at once life-affirming and scary. Through Jan. 8 at the Nelson-Atkins Museum of Art, 4525 Oak Street, 816-561-4000. (R.T.B.)

Pastoral Barbarism In his paintings, Lawrence artist Aaron Marable blurs historical figures with fantasy to produce a confused, intriguing and complex narrative. Frequently, archetypes mingle with elements of pop culture to create a vibrant stew of color and violence. Many of the works feature bloodshed and brutality in a variety of contexts, as if such actions were inescapable. Typical is “…With God on Their Side,” in which a soldier loads his musket as he stands in the mouth of a much larger soldier who is reclining, a week’s worth of whiskers on his cheeks. On top of this enormous soldier stands a tiny George Washington reading from scrolled parchment. A woman tends to a nearby third soldier, who is wounded and dying. At least four or five realities occur at one time; one image fights for attention with the other, and characters overlap in a fever dream of surreal, mostly Americana-inspired images. Marable applies paint in thick brush strokes fueled by a generous supply of passion — the act of violence influencing the process of painting itself. Through Jan. 21 at the Leedy-Voulkos Art Center, 2012 Baltimore, 816-474-1919. (R.T.B.)

Recent Paintings, Drawings and Prints by Michael Krueger and Don Ed Hardy Don Ed Hardy is a tattoo-art icon. We know multitudes of inked people who salivate at the mention of his name, so we had to check out his show. What we discovered: Each painting, displayed on archival scroll paper mounted on Chinese silk, looks like an elaborate tattoo big enough to cover the back of the world’s fattest man. Even the iconography — lions, skulls, pirate ships and sexy women — is tattoo-inspired. But unlike skin, which provides a fleshy, monochromatic backdrop for tattoo art, the scroll paper and Chinese silk swatches have a flimsy and beautifully patterned texture that makes the art look exceptionally bright, dynamic and, in some cases, even metallic. And though Hardy is the superstar, don’t ignore the simpler, smaller drawings by area artist Michael Krueger. With characters floating against a plain white background, these drawings are well-executed and possess a distinct narrative style. Our favorite is “Josephine,” which depicts a young woman walking out of a patch of plants and rocks, naked except for some letters mysteriously but neatly etched on her skin. Through Dec. 23 at the Dennis Morgan Gallery, 2011 Tracy, 816-842-8755. (G.K.)