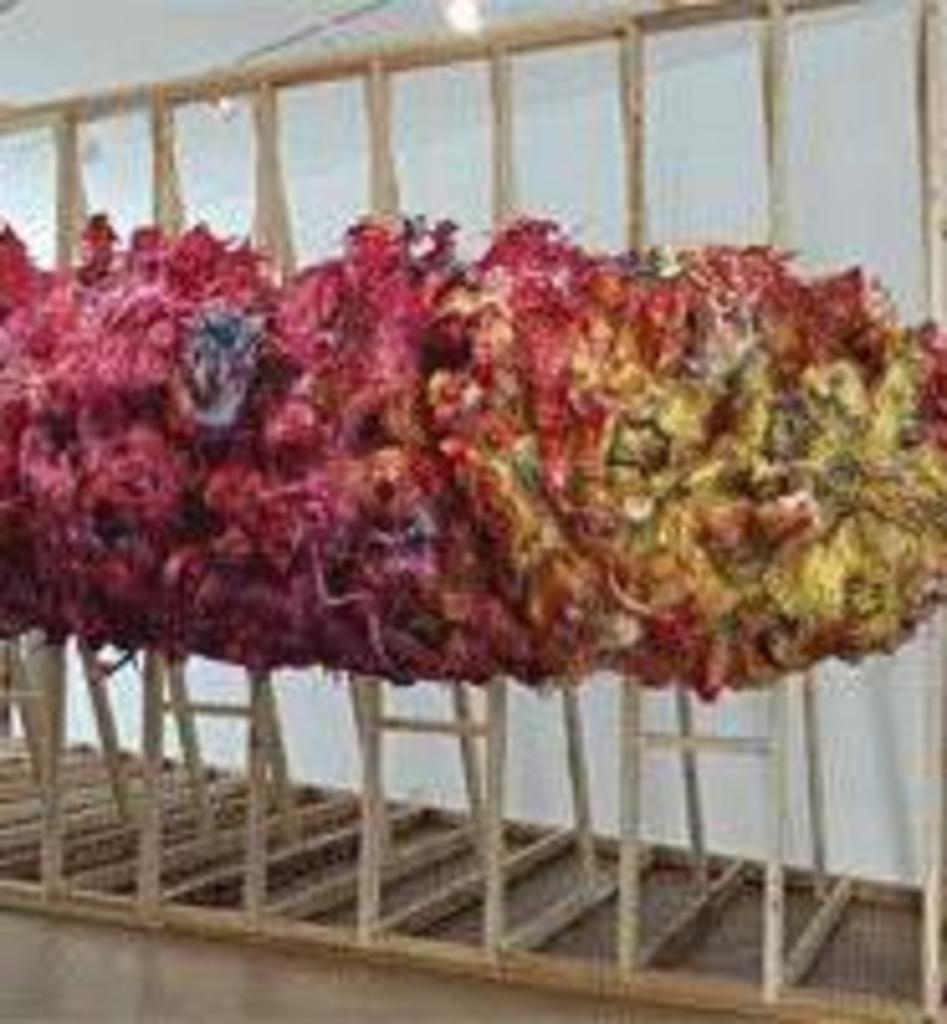 Blood Work When she was 7 months old, the daughter of Taiwanese artist Jawshing Arthur Liou was diagnosed with leukemia. Liou went on to document her struggle with the disease through the impressionistic images in these three video and sound installations. In “CBC” (an acronym for “complete blood count”), dreamy, soft-focus snowflakes fall while tiny people appear to run between the flakes and then disappear; these scenes are interspersed with the image of a red shape that expands as if it’s breathing. In “Hairline,” we hear a low, ugly hum as babies with oversized heads rise and fall down, flying upward and out of frame in quick succession against a blood-colored background. “Elements” shows hyperactive babies crawling and rolling, darting over bloody terrain and moving to form a soft white shimmer of shapes — possibly white blood cells — to be covered in a seeping ooze of red. All of the pieces are meditative and mysterious, personal without being sentimental or exploitative. Through April 22 at the Society for Contemporary Photography, 520 Avenida Cesar E. Chavez, 816-471-2115. (R.T.B.)

Celebrating a Grand Gift: The Hallmark Photographic Collection On January 12, the Nelson-Atkins Museum of Art announced that when its new Bloch Building opens in 2007, it will house the 6,500-piece Hallmark Photographic Collection. Keith Davis, director of Hallmark’s fine-art programs, has spent 25 years assembling the collection — which, with its emphasis on the history of American work, is considered one of the best in the country. Davis has organized a 31-piece exhibit to tempt our palates. The show includes important works by such greats as Chuck Close, Alfred Stieglitz and Man Ray as well as two teasers from Hallmark’s extensive daguerreotype collection and Harry Callahan’s “Ireland,” one of 320 Callahan holdings. Just try to take your eyes off Irving Penn’s gorgeous subject in “Woman in Moroccan Palace, Marrakech,” her face turned to confront the camera, the corners of her painted lips turned up oh so slightly. (Penn’s a fashion photographer to the core.) Or Carrie Mae Weems’ highly detailed prints of Ebos Landing, where, the legend goes, a number of West African slaves chose suicide as their freedom, drowning themselves in Dunbar Creek. (Some say that on quiet nights, their ghosts can be heard chanting in the marsh.) Our favorites include the film still of a 22-year-old Cindy Sherman, Ilse Bing’s self-portrait and Barbara Morgan’s 1939 photo montage “Hearst Over the People.” Through April 30 in Gallery 208 at the Nelson-Atkins Museum of Art, 4525 Oak, 816-561-4000. (A.F.)

Faith Culture Collection At Grand Arts, Welsh artist Neal Rock’s gargantuan “Pingere Triptych” (pingere is Latin for paint, but also means depiction) straddles the line between sculpture, painting and installation. The three pieces — horizontally arranged and oddly fish-shaped — are constructed from Styrofoam and covered in pigmented silicon squeezed out of cake-icing bags. The results form interesting combinations of shapes that fall somewhere between the natural and synthetic worlds. (Rock claims the three pieces weigh in at 1 ton, and the wood frame holding the piece contributes to the immense quality of the work.) Bright and shiny, thick and decorative, the sculptures appear to float. Look for the much less daunting but equally intriguing “Discreet Lustre,” a pine-cone, bud-shaped form delicately hanging vertically in the center of the smaller gallery. Through June 3 at Grand Arts, 1819 Grand Boulevard, 816-421-6887. (R.T.B.)

Five Acres Inspired by the wooded landscape of his upbringing, Kurt Lightner constructs sizable collages from hundreds of hand-cut pieces of painted Mylar, a process that generates works with a luminous, stirring energy. The series is striking in its polarity — in each of these nine pieces, individual elements are often repeated, yet the tones are overwhelmingly distinctive. Anchoring the images are vibrant flowers; lush, cellular growths; and solid trunks. But with additional layers comes the darker, more sinister side of a forest. One piece is thick with slender, blue-black foliage obscuring flashes of a bright background; another, the largest in the exhibition (and our favorite), stacks veiny mushrooms impaled on long, thin stalks atop a large, volcanic structure glittering with almost Klimt-like details. The collages are imbued with nostalgia, imagination and, strangely, an arresting sense of hunger. Through April 2 at the Kemper Museum of Contemporary Art, 4420 Warwick, 816-756-5784. (A.F.)