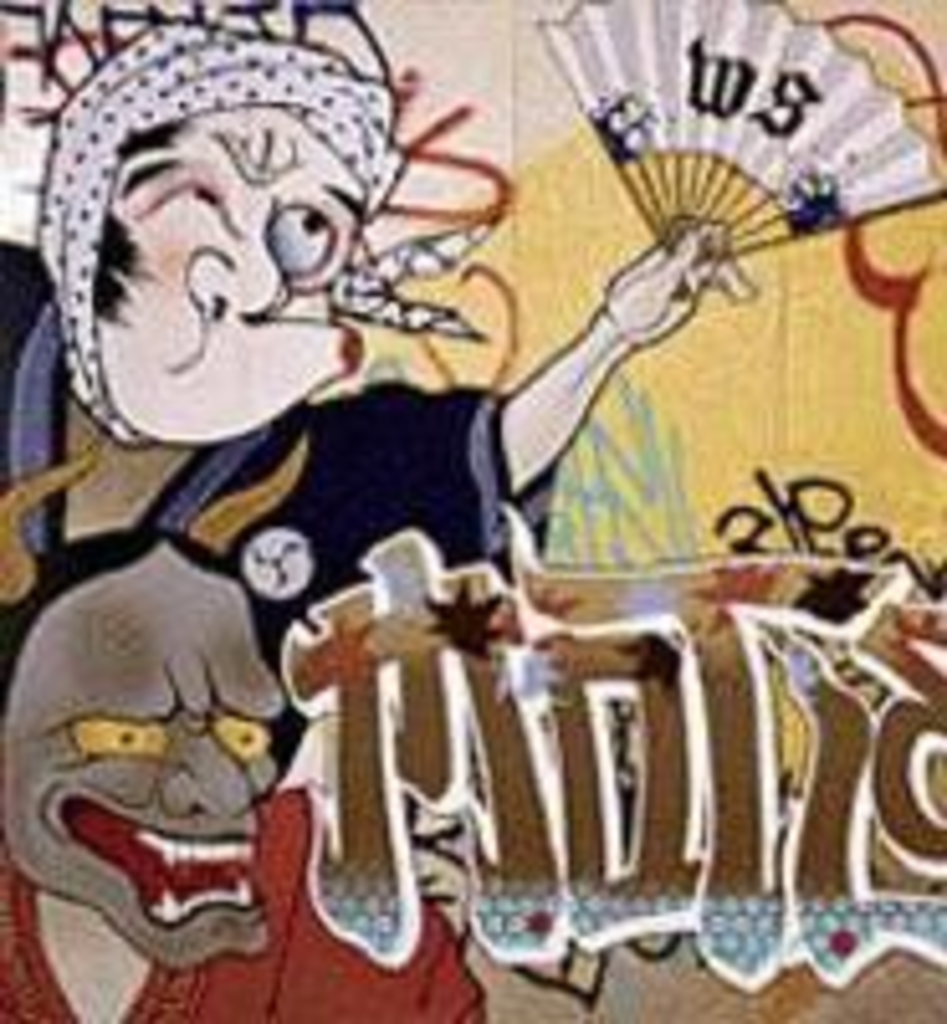 Elissa Armstrong: Objects of Innocence and Experience Lawrence artist Elissa Armstrong takes the lighthearted concept of “sit-arounds” (or “set-arounds,” depending on how rural your accent is) —decorative objects, including porcelain unicorns, free-standing arrangements of dried flowers and Precious Moments figurines — and flips it on its innocent little head. For this show, the Alfred University-educated ceramist (and University of Kansas assistant professor) gathers childlike lambs, bunnies and deer at thrift stores and garage sales and creates others with lowbrow, craft-store molds. She then adds heaps of bumpy plaster, douses the sculptures in glaze and glitter and affixes long, tubular clay appendages. Some of these subversive figurines look virtually untouched; others are so distorted they’re practically abstract. Arranged together on a flat plane, though, the 11 sculptures begin to make sense as an illustration of evolution or devolution— it’s up to the viewer to decide which. Through Oct. 1 at the Kemper Museum of Contemporary Art, 4420 Warwick, 816-753-5784. (A.F.)

Ars Artium Omnium Conservatix Hung amid the skeletons of salvaged mantelpieces, stained glass and doorknobs at Foundation Architectural Reclamation in the West Bottoms, Brad Finch’s photographs archive regional architecture. Finch’s range of subjects is wide; he seems to want to catalog our everyday lives through capturing the buildings we inhabit, whether they are grand estates or mundane locales such as the one depicted in “Spencer Chemical & Biology Building at UMKC.” He also spotlights architectural details not attached to massive structures (such as the wrought iron of the Gladstone Bridge) as well as now-demolished buildings such as Temple B’nai Jehudah. Through Oct. 13 at Foundation Architectural Reclamation, 1221 Union, 816-283-8990. (A.E.F.)

Eric Bashor: Who’s Your Daddy? He’s not our daddy, but Eric Bashor is recently a daddy, and we get the impression he couldn’t be happier. Objects that make up a simple baby’s world — stroller, nursery, jumpers and bathtub — are here in oversized glory, presented from a child’s perspective. This is a cute but sometimes lonely realm. In “Elsa,” Bashor uses layers of colored paper to portray the sober look of a baby; for the intriguing “Nursery,” he arranges individual sheets of paper over one another, adding nearly drab fragments and dripping lines to suggest that the formative years are often boring and untidy. But the bright yellow of “Duck Tub” and the playfulness of a children’s toy in “Octopus” indicate there are some good times as well. Through Oct. 7 at the Green Door Gallery, 1229 Union Ave., 816-421-6889. (R.T.B.)

The Feminine Mystique: Portraits of and by Women In an effort to explore the late-19th- and early-20th-century period of first-wave feminism, the Nelson-Atkins Museum of Art has opened an installation in Gallery P27, where 16 permanent works are being exhibited for the first time in years. The subjects mostly represent the family, friends and lovers of some of the most celebrated artists of their time. These women might have been gunning for equality, but we suspect they made plenty of men feel damned inferior. Through Oct. 1 at the Nelson, 4525 Oak, 816-751-1278. (A.F.)

Gajin Fujita: Zephyr By mixing traditional Japanese images into his graffiti-inspired paintings, Gajin Fujita creates what he calls a “dialogue” between two cultures — his native Los Angeles and his Japanese lineage — that’s repeated in exciting scenes throughout this show. In “Ride or Die,” Fujita uses spray paint, acrylic, paint marker and paint stick for a vibrant portrait of a warrior atop a reeling horse. Flying arrows surround him as he proudly carries a Los Angeles flag; behind him, indecipherable letters and words fill the tagged wall. (For blushes and giggles, head to the back of the gallery for erotic paintings with titles such as “Bangin'” and “Knockin’ Boots.”) Through Nov. 5 at the Kemper Museum of Contemporary Art, 4420 Warwick, 816-753-5784. (R.T.B.)

Megan Mcginnis Family photos never felt so creepy. Megan Mcginnis captures seemingly innocuous events in snapshots and then paints them with subtle changes so they’re somehow scary — we’re not sure why we should be weirded out, but we are. Two girls seated in front of a dollhouse in “Shared Room” look at the viewer with a blank stare; a veil of whitewash separating the girl in the background from the older girl in the foreground creates a sense of foreboding, heightening our anxiety. Mcginnis uses her camera’s depth field to create a similar feeling of unease in “Big Boy,” in which an adolescent boy is seated in front of a TV in what appears to be a rec room; Mcginnis has smeared a bit of paint around his eyes as the light from the basement window trickles down. Even the few smiling faces in Mcginnis’ images foretell awful things. Though Oct. 28 at Byron C. Cohen Gallery for Contemporary Art, 2020 Baltimore, 816-421-5665. (A.E.F.)

Saints & Sirens The Blue Gallery’s invitational exhibits the work of 11 artists from various parts of the country, mostly painters, loosely united under the themes of religion and the female human form. (Rachel Bess, Sarah Bereza and Cassandra Barney here show their work professionally for the first time.) Joseph Lorusso’s dark, realistic oil-on-panel portrayals of Kansas City locals hang uneasily alongside Bess’ symbolic oil portraits; Rachel Stuart-Hass’ introspective woman in the oil-on-canvas “Can It Be Wondered in Such Conditions?” would never spend an evening with the sorority girls in Sarah Bereza’s “Pillow Fight” triptych. Elsewhere, sculptor Adam Smith impresses with female figurines that bear outlandishly large pairs of buttocks — perhaps adopting a European view of American anatomy. Despite the disparity and tension, there is harmony in the show’s common concern for the human form and in the questions and puzzles that concern inspires. Through Sept. 26 at the Blue Gallery, 7 W. 19th St., 816-527-0823. (S.R.)

Martha Schneichert and Jim Walker Martha Schneichert’s photocopied collages on panels are like Victorian-era botanical prints. Modern technology, however, lets her surpass the older style by illuminating the flora’s slightest details. In “Poppy,” the flower’s red stands out against the black panel, and it looks as if we could run our hands across the veins of the petals and feel the ridges. With a strong grasp of photographic technique, Jim Walker also exposes the finest details in nature, such as folds of clouds and the quills of a decaying bird. There is an otherworldly quality to the work of both artists, which is a little unsettling but ultimately conveys a sense of tranquility. Through Sept. 30 at the Back Room Gallery in the Leedy-Voulkos Art Center, 2012 Baltimore, 816-474-1919. (A.E.F.)

2006 Charlotte Street Awards Exhibition Deanna Dikeman strikes us as the most worthy recipient of one of this year’s Charlotte Street Awards. The series of photographs on display here, called Relative Moments, chronicles her family — in particular, her parents, aunt and son. Dikeman captures snapshotlike moments in beautiful black-and-white prints: her parents waving goodbye as she leaves for college, her father teaching her son to cut rhubarb, her mother standing at Dikeman’s father’s grave. The intimacy in these photographs doesn’t feel voyeuristic because such experiences are so universal. We feel we know these people. Through Oct. 14 at the H&R Block Art Space, 16 E. 43rd St., 816-561-5563. (A.E.F.)

Whoop Dee Doo The troupe of artists behind Whoop Dee Doo is attempting to create a Kansas City incarnation of the Chicago-based public-access TV program Chic-a-go-go, a show with a cheesy set, loud music and lots of dancing. The Kansas City version is less cheesy but more absurd — and fun. This exhibition contains, among many other things, a large poster examining the life of Arnold Schwarzenegger, parabolas of aluminum hanging from the ceiling, three large porcelain busts doused in bright colors, a theatrical set containing a wooden shack, a Wheel of Fortune-type spinning wheel and a graveyard with headstones. All of these things, however, are props for the entertaining show that happened on opening night; viewers can relive it when a tape of that event screens on closing night (8 p.m. on October 7). Between now and then, without the music, dancing and cameras, this exhibition is as lonely as the Hollywood set of canceled sitcom. Through Oct. 7 at the Greenlease Gallery, 1100 Rockhurst Rd., 816-501-4407. (S.R.)