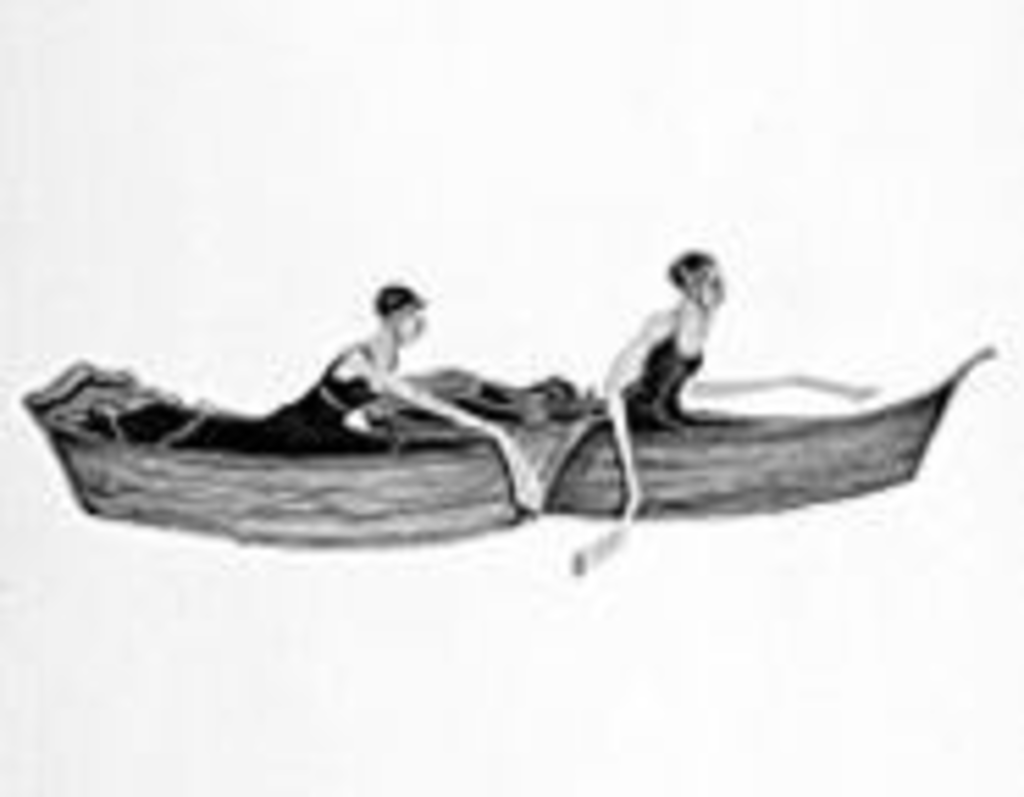 Amy Cutler The fanciful costumes and absurd situations depicted in Amy Cutler’s gouache paintings on white paper often draw comparisons to fairy-tale illustrations, but Cutler finds inspiration in a wide variety of sources: Laura Ingalls Wilder, James Audubon, childhood memories of her father’s pet store. For example, in “Dinner Party,” young women in elaborate ball gowns use their long braids of hair to strap wooden chairs atop their heads; they then conduct a duel standing on the dinner table, fighting with the chair legs the way elk fight with their antlers. Cutler’s highly detailed paintings show only characters and props; that there are no backgrounds to help explain the bizarre situations expands the opportunities for a viewer’s interpretation. Through July 11 at the Kemper Museum of Contemporary Art, 4420 Warwick Blvd., 816-753-5784. (T.B.)

The Disembodied Spirit One of the most eerie pieces in the Kemper’s show is scary for reasons more psychological than otherworldly. Francesca Woodman — known as much for her young suicide as for her art — used to take out-of-focus self-portraits as she hid behind the peeling wallpaper in her dilapidated studio. In the resulting images, a woman seems either to be vanishing into or stepping out of the walls. One such beautifully creepy image is hidden in the corner of the gallery, a small work compared with the others in this varied exhibit. Other gems include a handful of tiny early photographs from the Spiritualist movement that depict people with superimposed images of deceased relatives (and other companions unavailable to pose for pictures — Jesus, for example). A standout example from this collection, titled “I Remember Father,” shows a well-dressed man sitting in a chair, smoking a cigarette, smiling to himself. Framed by the smoke is a billowy likeness of what we can only assume is his pop. The exhibit delivers big names such as Joseph Beuys, Bill Viola and Gregory Crewdson. But more important, a suspended chair with gooey-looking, resin-covered fabric hanging from it brings back fond memories of scenes from Ghostbusters featuring “ectoplasm” — all anyone can ask of a ghost-themed art show. Through May 23 at the Kemper Museum of Contemporary Art, 4420 Warwick Blvd., 816-753-5784. (G.K.)

The Fairy Tale Project This first curatorial effort from Lucy Pistilli, a 2003 Kansas City Art Institute graduate, is a hit-or-miss gathering of work centering on themes from Brothers Grimm fairy tales. Pistilli and her co-curator and father, Robert, include material from comic books, embroidery, puppets and performance art. Standout pieces include Josh Hoffine’s photograph “Wolf,” which depicts a werewolf lunging down a dark and dingy staircase toward a screaming blond toddler. The daunting shadows and the terrified look on the child’s face convey dark fairy-tale undertones. Also notable are Amy Wright’s iconic, flatly painted surreal landscapes and Jessica Reeves’ energetically composed ink drawings, reminiscent of 1970s cartoons. The order of the work flows well, but the installation is at times distractingly amateurish. This is the Fahrenheit’s last exhibit before its summer break. Through May 7 at the Fahrenheit Gallery, 1717 West 9th St., 816-304-5477. (T.B.)

Hung Liu It’s no surprise that Hung Liu, who emigrated from China in 1984, finds inspiration in historical Chinese photos: Her mother destroyed the family’s photo album as a protective measure during China’s Cultural Revolution. Liu’s collages include photographic elements with figures, dragons, birds and flowers, using her signature paint-dripping style. With its mauve palette and borderline cutesy subject matter (small children), some of the work at the Cohen feels like living-room décor compared with the powerful piece in the Kemper’s collection “Mu Nu (Mother and Daughter),” which depicts a mother and daughter straining to pull a boat down a shallow river. Still, Liu’s combination of haunting old black-and-white images and swirling brush strokes of bright color and traditional Chinese imagery makes for intriguing paintings. Through May 1 at the Byron C. Cohen Gallery for Contemporary Art, 2020 Baltimore, 816-421-5665. (T.B.)

Project 910 S Wall For his exhibit at the Society for Contemporary Photography, Kansas City artist Colby K. Smith painted a dilapidated old house white (the show is named after its address), then peeled away layers of the walls, sidewalk, floors and furniture, documenting each step of the process with video and photography. Taken on their own, the square photographs appear to be nothing but surface studies of glue, fabric, gravel, wallpaper, etc., but they’re arranged in groups that convey the narrative of Smith’s building biopsy. The SCP’s goal was to demonstrate how photography figures in to a larger project; Smith plans to cut the house into pieces and ship it on palettes from Illinois to Kansas City, where he will reassemble it in a gallery setting. Through May 8 at the Society for Contemporary Photography, 2012 Baltimore, 816-471-2115. (T.B.)