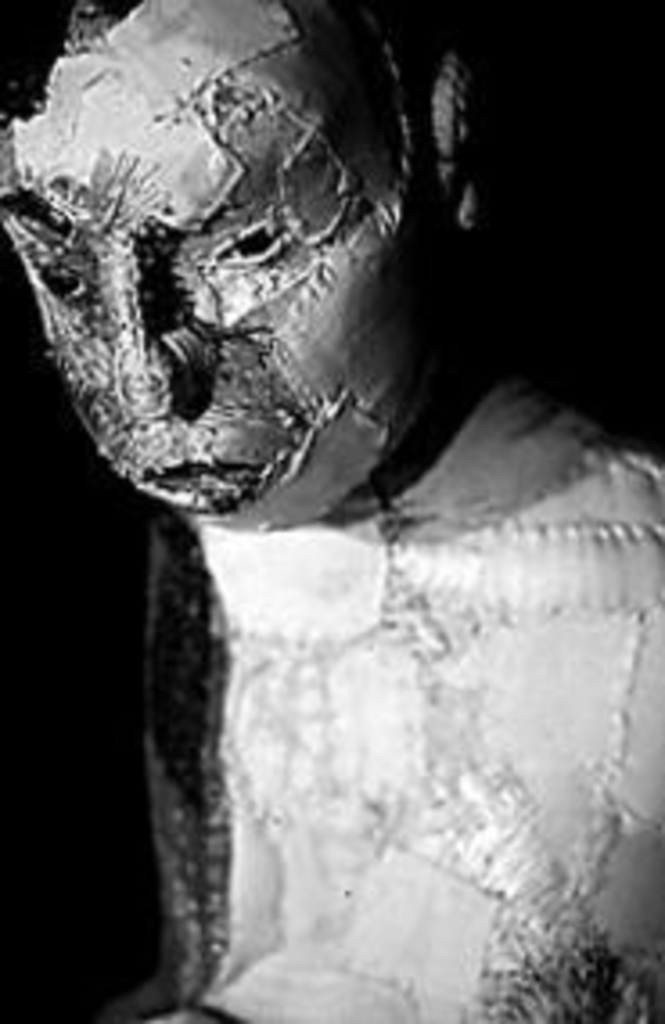 Five Locals, No Carbs, No Genomes, More Flavor In this show depicting work by five local artists — Jessica Johnson, Meredith Burton, Sean Semones, James Trotter and Pat Alexander — part of what you see is process. On the day of the opening, Johnson began drawing on the gallery wall as part of her installation. She was still at it two hours after the opening ended, and as of publication time, she wasn’t quite ready to leave it alone yet. Coincidentally, two artists have submitted works using markers on paper — unusual in the gallery world but impressive in these cases. Burton’s marker drawings appear to consist of layers of paper because she varies the levels of marker saturation in a way that creates an illusion of depth. Trotter’s marker drawings look like prints because they consist of several cartoon characters each drawn in a distinct color, then layered on top of one another without any blurring. The fact that this was done not with fancy equipment but with magic markers is what makes it intriguing, along with being able to see this kind of innovative technique as it’s still being developed and refined. On display noon to 6 p.m., Thursdays through Saturdays through Oct. 30 at the Telephone Booth, 3319 Troost, 816-582-9812. (G.K.)

Rachel Frank Really, the best way to see this show was to have attended the experimental dance production Elicit, for which Frank’s sculptures provided one part of the set. “Bird-Headed Girl,” a taxidermylike wall plaque, formed one side of a silent dialogue with dancers. “Falling Woman,” a disturbingly lifelike (if spineless) embroidered doll lying among tulle, was splayed out in front of a movable wall that doubled as a projection screen. Still on display alongside Frank’s stuffed-cloth sculptures are light installations created by James Woodfill for the performance. Called “Anchors” and “Spinner,” these works created light in motion for the dancers. Unsettling at first, the lights became part of the dancers’ movements and now can be studied on their own. What remains of the performance is on view through Nov. 6 at the Fahrenheit, 1717 W. 9th St., 816-474-5477.

Manipulated Realities: From Pop Art to New Realism Photo-realist artists feel the need to paint pictures that look as real as photographs — instead of actually taking photographs — because they are control freaks: As painters, they can control every detail. Each artist in Manipulated Realities, curator John Buchanan says, “manipulates reality in an effort to send an individual message.” For example, in a print commissioned for Myra Morgan’s collection, John Baeder changes the name of a diner to “Morgan’s,” and Richard Estes substitutes his own name for signage over a shop in one of his mind-numbingly detailed street scenes. But not all of the artists in this show are driven by ego. Richard Pettibone paints tiny reproductions of other artists’ full-sized paintings. Pettibone’s “Chris Cross: Hooker Headers” is displayed right next to Chris Cross’ “Hooker Headers,” an extreme close-up of a motorcycle in which a desert landscape is reflected in the bike’s chrome. Weighing in at an overwhelming 121 paintings, sculptures, prints and photographs, the show would benefit from some editing, but overall it’s a great opportunity to see a lot of realist art in one spot. Through Jan. 7, 2005, at the Belger Arts Center, 2100 Walnut, 816-474-3250 (T.B.)

The Strange and the Fantastic If NBC ever decides to bring back Freaks and Geeks, a show set in 1980 that follows the tribulations of social misfits at a Michigan high school (unfortunately, it was canceled after its first season), its producers should add an artsy character and hire Kris Kuksi to create that character’s artwork. Kuksi’s paintings, drawings, collages and sculpture are the perfect combination of freakiness and geekiness — his technically adept work looks as though it could grace the cover of a ’70s rock album or a fantasy trading-card game. “Song for Irina,” for example, re-creates the creepy feel of an old-timey black-and-white photograph in which the subjects had to sit still for several minutes in order for the film to register an image. Yet here, Kuksi has drawn a woman’s head on a skeleton wearing an elaborate headdress of fur or feathers. The woman’s eyes are half-closed and shrouded in a dark, charcoal shadow, and her lips are slightly curved into a Mona Lisa half smile. Through Oct. 30 at the Leedy-Voulkos Art Center Back Room Gallery, 2012 Baltimore, 816-474-1919. (T.B.)