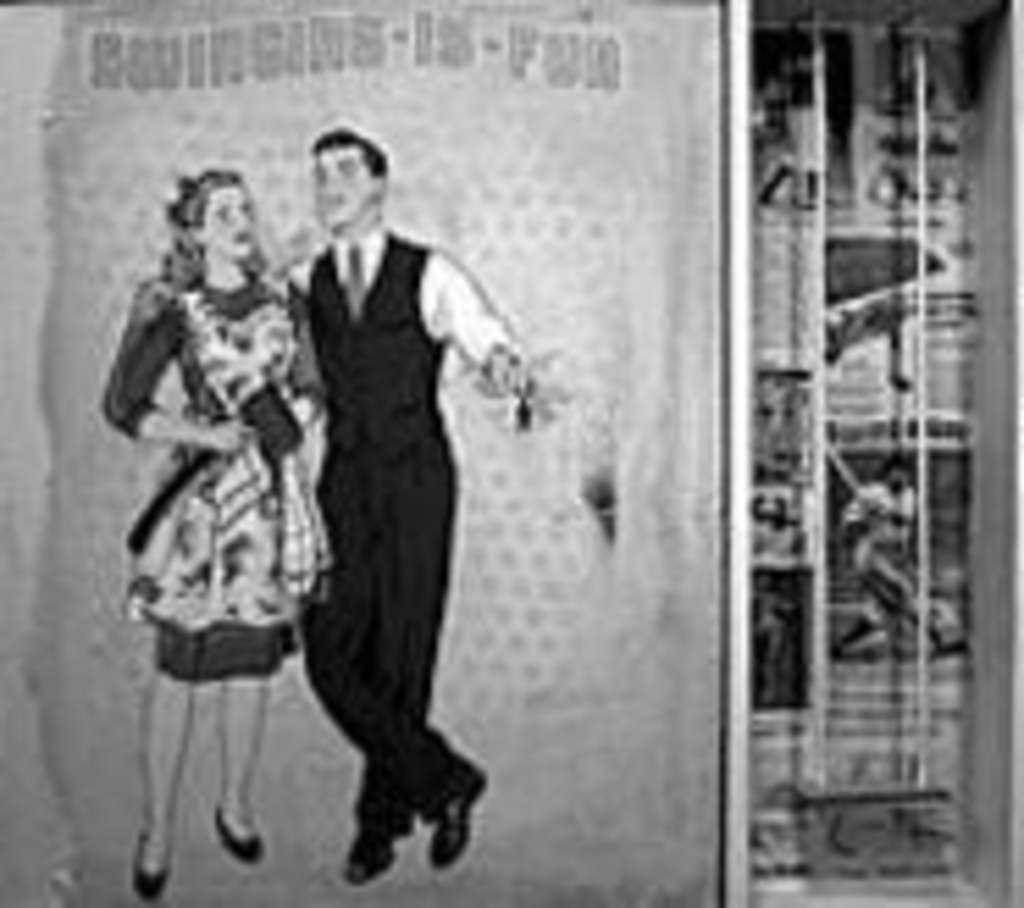 Daddy Says Good art and art that you want to hang above your sofa are not the same thing. The work in Lori Raye Erickson’s solo show Daddy Says is a case in point. Are the two paintings of injured women — the first reading “Mommy Fell” and the second adding “Again” — good? Yes. But in spite of their domestic theme, these are paintings most of us would rather not display in a nursery or a bedroom. Some of Erickson’s works could be delightful in a study or a library, such as the humorous painting of two girls holding hands — one all frills and the other in shorts — that says “Twins are Weird.” Especially skillful and original are her multimedia paintings with three-dimensional trinkets attached. Erickson shines at this technique, and we’re pleased to see her return to it. (There’s even a stitched-wound homage to her earlier “Fluff” paintings, which longtime fans will appreciate.) But don’t be ashamed if you’d rather see these mostly abuse-themed pieces in a gallery than at home. After all, there’s something to be said for art that goes beyond décor. That’s why the Green Door Gallery calls itself “a safe venue for unsafe art.” Through Dec. 11 at 1229 1/2 Union Ave. in the West Bottoms, 816-421-6889. (G.K.)

Heroes and Villains, A Sideshow in Two Parts Just so you know, the work in the west-facing window at the Dolphin Gallery, which changed throughout the presidential campaign, will continue to change in its aftermath. So even if you’ve seen this theatrical political display, go back for Kansas City Art Institute printmaking students’ up-to-date reactions to the electoral process. The day before the election, the two candidates’ heads were superimposed onto a fat green monster (representing Bush) and a hunky dude in tighty-whities (Kerry). Bush sports fangs and a desperate neck tattoo that reads “I can’t live without you.” Kerry, apparently, costs only 10 cents. What a deal! Citizens whose heads have been transformed into animal mugs — some of them covered in red, white and blue stripes — strike sexy poses nearby. Through November at the Dolphin, 1901 Baltimore, 816-842-5877. (G.K.)

Manipulated Realities: From Pop Art to New Realism Photo-realist artists feel the need to paint pictures that look as real as photographs — instead of actually taking photographs — because they are control freaks: As painters, they can control every detail. Each artist in Manipulated Realities, curator John Buchanan says, “manipulates reality in an effort to send an individual message.” For example, in a print commissioned for Myra Morgan’s collection, John Baeder changes the name of a diner to “Morgan’s,” and Richard Estes substitutes his own name for signage over a shop in one of his mind-numbingly detailed street scenes. But not all of the artists in this show are driven by ego. Richard Pettibone paints tiny reproductions of other artists’ full-sized paintings. Pettibone’s “Chris Cross: Hooker Headers” is displayed right next to Chris Cross’ “Hooker Headers,” an extreme close-up of a motorcycle in which a desert landscape is reflected in the bike’s chrome. Weighing in at an overwhelming 121 paintings, sculptures, prints and photographs, the show would benefit from editing, but overall it’s a great opportunity to see a lot of realist art in one spot. Through Jan. 7, 2005, at the Belger Arts Center, 2100 Walnut, 816-474-3250 (T.B.)

Moving In Is Moving Out Filing, folding laundry, shoveling leftovers into Tupperware bins, transferring receipts from a wallet to a shoebox — because of the utter dullness of storage, the location and premise of a show at a storage facility in a blighted Topeka neighborhood might sound less than promising. Don’t be fooled. The storage facility — dubbed “FLEX” — was built by the progressive Kansas City architecture firm El Dorado in hopes of inspiring what can only be called suburban renewal. If the effort works, the building could easily be converted from a storage facility to a retail space. And the big surprise is that it’s an attractive structure, one that actually glows on one side, with giant silhouettes of passers-by projected onto the exterior walls. For now, the building’s compartments are filled with installations by Kansas City artists Mike Sinclair, Jordan Nickel, Marcie Miller-Gross, James Woodfill and Miles Neidinger. Of special note is the room with colorful plastic hangers hooked into the wire-cage ceiling. On the night of the opening, T-shirts with slogans such as “Re-Move,” “U Moving Me” and “Seriously, I’m Free” hung from these. The message, loud and clear, was: Steal the shirts. A video loop capturing the T-shirt thieves at work — transforming the space from a dense maze of cotton blend into an open, airy hanger-mobile display — plays for visitors. Through Dec. 18 at 447 S.E. 29th St. in Topeka, 816-444-4414, ext. 1. (G.K.)

X Marks the Spot Something about being in your early twenties makes where you came from and where you’re going such pressing matters. During those years, the urge to settle down and domesticate competes with the urge to wander around and see what other dots on the globe might offer. Nowhere have we seen Early Twenties Geographical Anxiety take visual form so precisely as in the embroidered fiber works of Nancy Bach and Lauren McEntire at Momo. These women — one a recent Kansas City Art Institute graduate and the other still a student — keep their collaborative work simple and concise, which is how it draws its emotional strength. Vintage suitcases line the floor. Opened, they reveal screens with versions of the women’s geographical timelines embroidered in a way that makes them look like train schedules or bus routes. (The last stop on the timeline is always a question mark.) The writing is small enough that viewers must crouch down and peer into each suitcase, which not only feels intimate but also evokes familiar sensations of packing and unpacking. Meanwhile, on the wall is a giant quilt map of the United States. The artists have assembled color-coded push pins and ask that gallery visitors use one color to indicate where they’ve already been, another to show where they hope to someday go and still another to mark places they never want to go again. Now that most of the pins have been used, the map is a testament to the emotions inspired by places — especially for people who reside in wanderlust-ridden Kansas City, where moving away and coming back could be considered an official local sport. Through November at Momo, 1830 Locust, 816-474-4814. (G.K.)