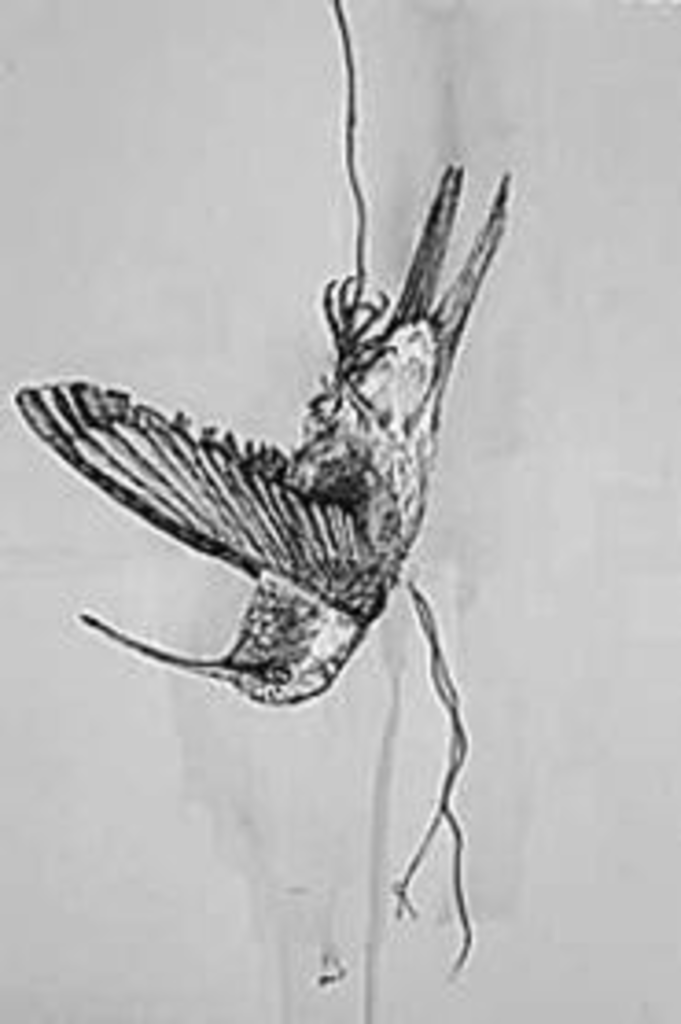 Roberto Juarez: They Entered the Road How we choose to memorialize the dead often has something a little, well, dead about it. Monuments and plaques are fine and dandy, but how do they give us any clue about someone’s life? Roberto Juarez attempts to answer that question in this collection of five paintings, each one titled in tribute to a deceased friend or family member. This could have been a morbid undertaking (pardon the pun), but Juarez’s paintings are alive and kicking. Using diverse materials — peat moss, rice paper, charcoal — on a huge scale (one work measures 21 feet by 9 feet), Juarez uses nature as both an ingredient and a subject, painting vivid flowers, leaves and fruits as if the makings for a still life have been set free to tumble across his canvases. One painted elegy, “Gone to Italy/Se Fue a Italia,” takes its title from a friend who died of AIDS and said before his death, “When I die, don’t tell people I died — tell them I went to Italy.” In “Caminito, Gloria/Little Road, Gloria,” Juarez leaves an enormous blank space in the middle of his canvas, keeping the painting’s activity to the corners and edges. It’s as if he’s grappling with the hole left by the loss of his niece. Through Feb. 27 at the Kemper Museum of Contemporary Art, 4420 Warwick Blvd., 816-753-5784. (R.B.)

Anne Pearce: New Work One of our all-time favorite cinematic art-related exchanges occurred in last year’s Napoleon Dynamite, when budding artiste Napoleon is asked what he’s drawing and responds, “A liger. It’s pretty much my favorite animal. It’s like a lion and a tiger mixed.” Genius. Whereas liger awareness seems to be limited to Hot Topic’s Napoleon-related goods, Anne Pearce crafts animal hybrids of her own in this show of recent work. One figure has a finely drawn bird head paired with the torso of a woman and legs that look like a horse’s. The beauty of Pearce’s work is in its details: Dramatic washes of color hide illustrations of animal heads or claws, holes punched into paper form gentle shapes, and certain patches resemble loose-leaf paper that’s been gently distorted. Pearce’s work is even mounted with an ingenious twist: Eyelets in the corners of each painting allow pins to hold them to the walls without leaving holes. It’s a weird and lovely mix of Audubon and a visit to the office supply store. At MoMo Studio, 1830 Locust, 816-474-4814. (R.B.)

Transcending Art The ever-expanding feng shui section of our local bookstore tends to simultaneously fascinate and scare us. We like the idea of clearing clutter and honoring our home, but we’re a little lazy when it comes to following diagrams and placing mirrors in corners. PennyLea Mackie’s show includes a feng shui series that she describes on her Web site as “imparting an energetic coherence in the rooms or buildings in which they are placed.” Mackie’s paintings, titled after the elements to which they correspond on a bagua, or feng shui map, have titles such as “Benefactors and Travel” and “Wealth and Abundance.” Stylized bamboo stalks and streamlined gingko leaves are among the recurring images in Mackie’s work, which has an illustrative, delicate quality. Mackie’s renditions of saints and goddesses, decorated with metallic paint and small rhinestones, include depictions of Our Lady of Guadalupe as well as Green Tara, who we like to think of as a feminist Buddha, the goddess of action and universal compassion. When monks told her they’d pray for her next life to be one in which she’d spread Buddhist teachings — as a man — she told them that gender was meaningless and that she would remain a woman until all were enlightened. She’s probably still waiting. Through Jan. 28 at Chiro Studio Gallery, 706 West Pennway, 816-471-2781. (R.B.)

Wood Nymphs Trying to forge an intimate relationship with a bird is an uphill battle. You have to work hard to get close to an unpettable animal that wields a sharp, pointy beak and glances shiftingly at you with expressionless little eyes. That’s why we’re so impressed by the range of emotions that painter Jane Almirall elicits with her watercolors of birds tangled in red string. In Almirall’s world, the difference between a bird making a nest with red string and a bird being pulled to the ground by red string is not in its facial expression — birds neither smile nor frown — but in the subtle positioning of the bird on the page, the direction the bird is moving and the title of the piece. The titles, in fact, provoke human analogies, many of which are funny, a few of which are nearly heartbreaking. In “All of This Was Made For You and I,” for example, it’s hard to tell whether the two birds whose claws are attached by string are building a cozy nest together or are simply stuck together, destined to plummet. Don’t say you’ve never wondered the same about a human couple. Through Feb. 4 at the Taxidermy Gallery, 1229 Union Avenue. (G.K.)

Y-Topia It makes sense that James Brinsfield, a member of the painting faculty at the Kansas City Art Institute, would guest-curate a show of mostly former KCAI students. Theoretically, he’s in the perfect position to choose the best of the Generation-Y artists who have maintained ties to KC. For the most part, we appreciate his choices. Lynus Young’s “Stages of Sleep” blends 13 three-dimensional elements into one delightfully weird mixed-media installation — kind of like a large-scale figural version of Magnetic Poetry. Eric Sall’s thick oil-on-canvas creations are the show’s most challenging pieces, and we dig Peter Demos’ high-gloss acrylic drips. We don’t really get what Jaimie Warren is attempting with her unframed digital prints, and Liz Smith’s loopy paintings seem more decorative than anything else. More than the individual pieces, though, what works is the pervasive sense of youth conveyed in the work — not immaturity and not inexperience, but definitely youth. Through Feb. 26 at the Byron C. Cohen Gallery for Contemporary Art, 2020 Baltimore, 816-421-5665. (A.F.)