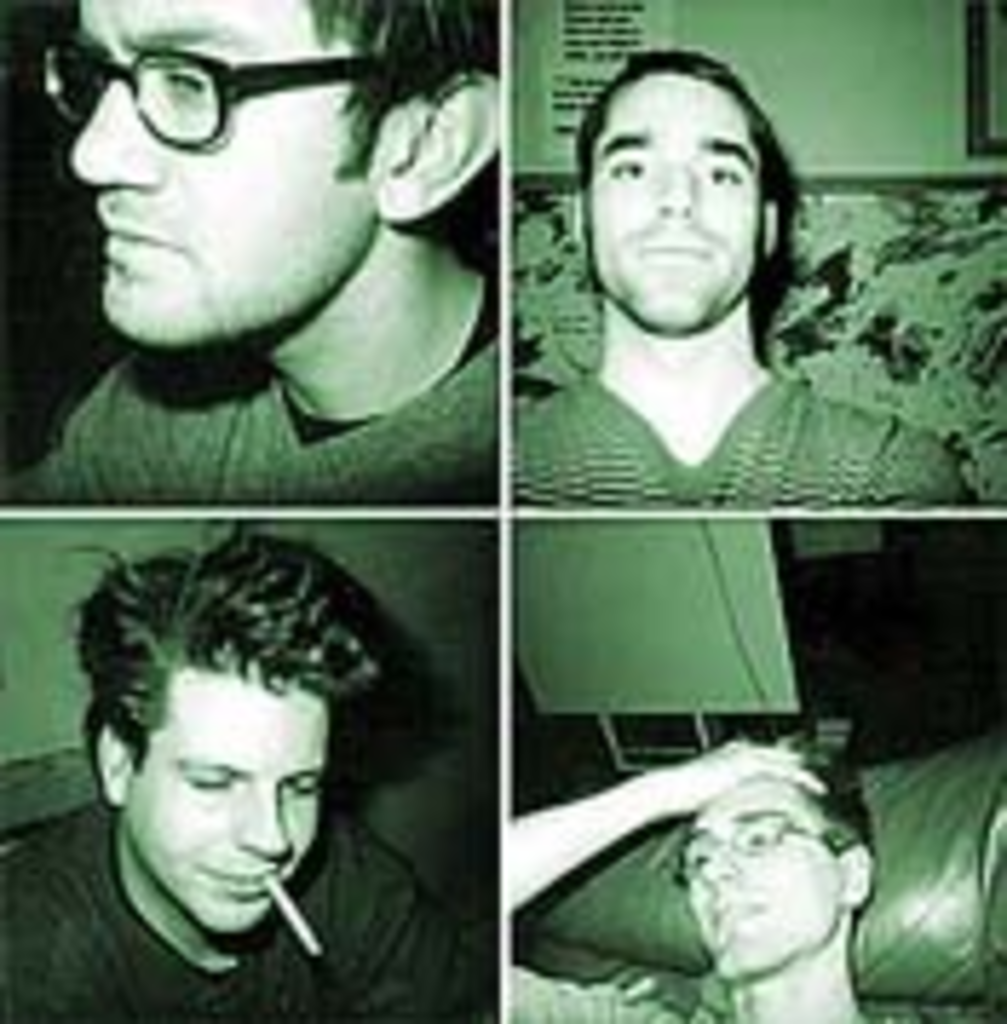 There’s nothing even remotely odd about a band that counts two guitar players among its numbers. Conversely, there is something kind of peculiar about a band that has two bass players — traditionally the most anonymous member of a group — in its lineup. But such a band is Aerialuxe, which is making quite a bit of noise as a nominee in the Best New Band category at this year’s Klammies.

“The two bass player thing was something that I was trying to do for a little while, a couple of years, and I just never got the right people to do it,” says one of the band’s bassists, Brian Quinn. “Ferris (Lucas, drums) met up with Thomas (Kerr, the other bass and keyboards) and Dave (Gaume, guitar) in a MIDI class, and they pretty much just wanted to get Ferris to play with them.” The three of them penciled in some time to get together — a date to which Quinn arrived uninvited. “They didn’t really know that I was going to be down there for this little jam session. I just showed up, and everything kind of worked.”

Gaume and Kehr had collaborated in a band called Nasa’s Little Secret, and Quinn and Lucas were acquainted from time spent in Post-Noise Sensation. But Aerialuxe, which was considering calling itself Glider at the time, was still short one vocalist. That position was filled with the addition of Janette Salisbury, whose powerful but controlled delivery helped unify the band’s noisy and pretty elements.

“I had met Thomas by going to a couple of their shows and heard they were looking for a singer, so I thought I’d give it a shot,” Salisbury says, mentioning that being the new kid on the block, compared with the others’ musical history, has been an advantage for the band. “They all know each other really well, and what they all like, and how to tweak things just the right way.” Aerialuxe will play Gee 2000 on Feb. 25 with Illborn and The Trip.

There’s always next year Debuting a month too late to be eligible for the 1999 Klammies award for Best New Band, Haloshifter will play its first-ever show Feb. 29 at The Hurricane with Thulium. Word on the street is that it’s going to be some show, even though the people who’ll tell you that haven’t actually heard the band yet.

“We tried to avoid the hype, but it didn’t work. And as cool as it is that we’re popular without ever playing a show, it’s just kind of annoying that no one’s heard us,” says drummer J. Hall. “This band, just because of the membership, is automatically really popular. We’ve gotten all of our shows without a demo tape or a phone call. All we do is rehearse and laugh about it, because we get e-mails from people we don’t even know, and there’s stuff on The Zone about it.”

For those who don’t spend all their free time on the Web, however, the question now should be: What membership? Among Haloshifter’s lineup, besides ubiquitous producer Hall, the four-piece features former members of Grovel as well as former members of The String and Return. But the band shouldn’t be stereotyped by its members’ past experience. Hall notes, “We’re just a rock band.”

Haloshifter started to come together while Hall was out hobnobbing in Lawrence. “I met John (Ferguson, guitar and vocals) at The Bottleneck when I went to see Thulium play. He was playing some acoustic stuff with Aaron Weber. Aaron knows who I am from doing Kristie Stremel’s record … so he came up and started talking to me and introduced me to John,” Hall recalls. “John and I started talking and realized that we listen to all the same music. At the time, I was kind of unwilling to play drums again. I’d been playing drums since I was 4 years old, and I play guitar now, and I’d just gotten burned out on being the drummer who has no say. John was like, ‘Oh, that’s cool.'”

Regardless of what Hall said, Ferguson attempted to bring him into the fold. “I got an e-mail from Keanon (Liggat, also guitar and vocals), who’s John’s roommate, saying, ‘Oh, I heard you play drums, and John and I have decided to put a rock band back together. What do you think about that?’ So we just chatted on the phone for a little bit, like, ‘What’s the style? What are we going to do?’ And I said, ‘All right, I’m in,'” Hall says. “We rehearsed a couple of times, recruited Jared (Jones) to play bass, and called it a band.”

But what if those who have embraced Haloshifter before hearing note one end up thinking the band sucks? “We’re going to laugh and give them the finger and play on,” Hall says. “It would probably be almost more entertaining if nobody liked us.” Haloshifter’s second, perhaps less-attended show will occur March 4 at El Torreon with Lushbox, Reflector, and The Hillary Step.

Keeping the beat So not only is Kansas City Chiefs running back Donnell Bennett this season’s leading team rusher, but he can play drums too? That’s exactly right. Bennett will take a seat behind the kit with Groove Agency at The Levee on March 2 in a benefit for the Clearing the Way Foundation. Bennett founded the organization — which, through sports and education, promotes the health and development of children with asthma — because he is an asthma sufferer himself. Admission is only $3, goes to a good cause, and costs considerably less than season tickets.

Live, baby, live Jewels Carter, who fronts resident funkers JC and Live Version, just got back from an extended trip to sunny California, and he’s already taking the boys back out on the road. “I left Kansas to pursue my career,” Carter says of his five-year absence. “Now I’m bringing it back to Kansas City and the Midwest, starting from home, and spreading it back out.”

Before the band heads out, however, JC and Live Version will hit area clubs for something of a warmup. And that warmup had a warmup, too, though it wasn’t your average fan of the funk who was in attendance. “I’ve been doing some schools around the metropolitan area,” Carter says. “I go and do a little small show for them and then I talk to them as well, let them know the ins and outs as far as what they need to do once they get out of school. Whatever they decide to do, be sure to keep it on a positive note.”

The average audience member at one of those shows might not know George Clinton from Bill Clinton, but Carter says it’s still a good time. “It makes me feel better than doing a concert, performing in front of the kids,” he explains. “It kind of reminds me of when I was younger, trying to either be a basketball player or a musician, especially with me being from here. A lot of artists that go on to the next level, they don’t really come back and appreciate the kids until something tragic happens. I want to come back and give it back to them.” People without homework can catch JC and Live Version at Club Mardi Gras on Feb. 24, The Roxy on Feb. 28 and March 13, Gee 2000 on March 3, and Crossroads on March 4.

Lottery pick Chances to check out Casket Lottery are going to be few and far between this spring because of travel plans the band made with its friends in Reflector. Both groups will play The Bottleneck on March 9 as a kind of dual CD-release party — Casket Lottery with Moving Mountains and Reflector with Where’s All the Melody Gone — the night before the bands hightail it for the coast. “The day before, I’m quitting my job, and we are going to be pretty much on tour for the next three months, off and on,” says Nathan Ellis, Casket Lottery’s guitarist and vocalist. “We’re going to the West Coast for about two weeks, and then I think we’re splitting up, and they (Reflector) are headed back home — because they have to go to school — and we’re going to do a couple more dates without them. Then we’re home for one day, and then we’re headed up to a big fest in Michigan at the end of March.”

While out on the road, Casket Lottery’s and Reflector’s paths will converge with another band from the Kansas City scene. “We meet up with Appleseed Cast in California somewhere, and they do four shows with us,” Ellis says. “It’s the weirdest thing. We got our Koos show, which is a place in California, and it was initially supposed to be us, Reflector, Appleseed Cast, and The Anniversary. But The Anniversary had to change their tour schedule around a little bit, so somebody else hopped on it. That would’ve been really funny.” One more chance to catch Casket Lottery before the band gets spoiled by the sunny weather will be at El Torreon on March 1 with Discount, Small Brown Bike, Annie On My Mind, and The Rockafellers.

That’s Kansas’ state song, not songs by Kansas Okay, so $1,000 isn’t quite the dough that Regis offers, but it’s still $1,000 more than you’ve got right now, and you can get your grubby little hands on it by showing a little pride in where you’re from. The State Song Project is looking for modern renditions of state songs in the public domain, which include Missouri’s “Missouri Waltz” and Kansas’ “Home on the Range,” and it’s ponying up that prize money for the best version of each. All styles of music are open to the contest, and, strangely, you can cover any state’s song as long as it’s on the list at www.statesongproject.com, which is also where the official rules and other fine print live.