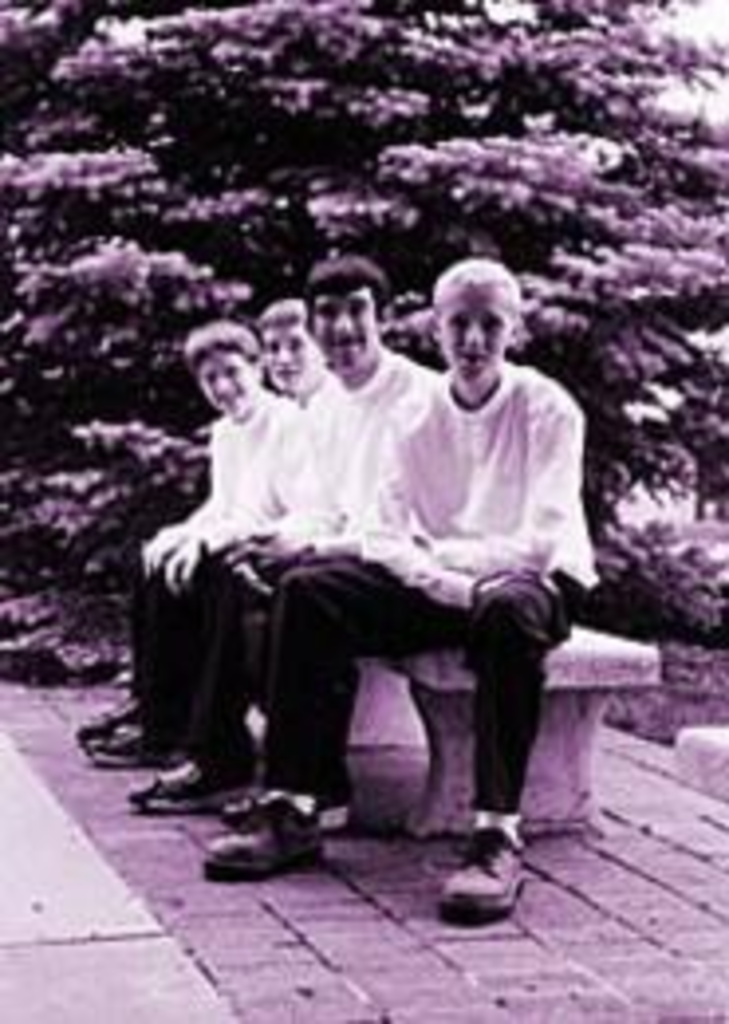 “I had a ticket to REO Speedwagon about two years ago, and I was so upset because I didn’t get to go. I look back and laugh at it now. Now I’m like, ‘I’m going,'” recounts 17-year-old Jason Smith, The SuperNauts’ guitarist and vocalist. “And I might get to see them just a little bit closer.”

That’s because The SuperNauts scored the opening slot for REO’s show with Styx and Eddie Money at Sandstone Amphitheatre on Saturday, June 10. That gig is the prize the fledgling KC group earned for taking top honors at 99.7 KY’s Battle of the Bands, held at Flamingo Casino four weeks ago — the same one where Boot Hill had its gear stolen. The win came despite the fact that no one in the band is old enough to drop cash at the blackjack tables.

Jason is actually the eldest SuperNaut and bookends the group with his bass-playing younger brother, Jordan, 13. In between are Dustin Padget, 14, on guitar and harmonica, and drummer Kenny Wood Squires, 16. Like the other KWS (Kenny Wayne Shepherd), The SuperNauts are down with the blues, in forms both heavy and more traditional. “We started listening to Zeppelin and Hendrix and Stevie Ray Vaughan — I’m really big into the blues, and I practice, like, seven hours a day. I still do, just to become really good at the blues and put blues into pop music,” says Jason. “We started acquiring our own sound after taking bits and pieces from other people. I like the Goo Goo Dolls and stuff — they’re a cool band, but you take all that together and you get The SuperNauts.”

The band started to come together before any of its members had even entered high school. “I met the drummer at my junior high and hung out with him for a while. My brother was playing drums at the time, so we got rid of him, and he came back later as the bass player,” Jason explains, also noting that although Squires was born with cerebral palsy, he can still beat the hell out of his kit. “It makes us sound even better because he just doesn’t give up on those drums. He’s probably one of the most intense-playing drummers I know, and he’s a good example to everybody. A walking miracle, I think.”

Summer 2000 is shaping up to be a big one for The SuperNauts, with that show at Sandstone being but one of the highlights. Not only is the band’s debut CD, Orange Moon, scheduled for release sometime in the sweaty months (a portion of the proceeds will go to the United Cerebral Palsy Organization), but The SuperNauts will be on 99.7 KYYS with Max, Tanna, and Moffitt the morning of Thursday, June 8, and will appear on the WDAF Channel 4 Morning Show the next day. Don’t think the boys are nervous about that Sandstone gig, either.

“The bigger the crowd, the better it is for us. We just go at it, and I don’t think we have a lot of fear toward the crowds,” Jason says. “The only fear we have is not having our guitars in tune.” Maybe Styx can spare a roadie.

Daybird believer
Metallica may be all grumpy-grumpy about the online music revolution, but for acts that haven’t yet reached that peak, exposure on the Internet is a sweet blessing. On the local front, The Daybirds are another band that seems to be doing well there, even if the Web site it conquered is in the United Kingdom. Last November, The Daybirds’ happy-go-lucky pop took the number one spot on the UK version of Vitaminic.com, and out of that, the group has secured another plush deal. The UK version of PC Magazine is distributing a CD-R with its May issue that features 10 songs pilfered from Vitaminic.com UK. Surely you don’t need to be told who one of the bands on it is.

“The boys from Vitaminic.com e-mailed us and said, ‘Do you want to do this?’ and we said, ‘Well, sure,” says Dean Woods, one of the Lawrence-based band’s four multi-instrumentalists. He also notes that there were quite a few contenders — the site has more than 10,000 songs on it — and The Daybirds have yet to see the issue. “We actually haven’t got a hard copy of the magazine, so we’re waiting to see what happens. It’s a computer magazine, but still it goes to a lot of people, and their May issue was all about MP3 technology — just basically the whole MP3 world and its role in the music industry.”

That role has yet to be well defined, except that it could turn out to be a big one, but Woods is still happy to take advantage of the development. “We’re on MP3.com, and we get anywhere from five to 20 downloads a day. That’s a great way to get your name out there,” he says. “It’s nice for the fans to be able to go on and download the songs and throw it on to a CD-R and slap it into the car. But obviously, that’s as far as I would personally take it. I want the artwork, I want the graphics on the CD, I want the lyrics and the whole package that comes along with it. I don’t think it’s really a bad thing, especially for new bands.”

Some of those people are gracious enough to drop The Daybirds a line after they’ve downloaded the song and taken a listen. “Some days I’ll get just one, but some days I’ll get 10. A lot of them are, like, MP3 viewers who are just writing to say, ‘Hey, I’m writing from so and so. I heard your stuff; it sounds awesome,'” Woods says. “We have cats from Japan e-mailing us, people from Italy, Switzerland, Sweden. Basically, anywhere, you name it.”

Apparently, some of the betties dig the guys for reasons nonmusical. “You get the occasional girl who e-mails that saw you at a place you played and you didn’t meet her at the show. She says, ‘Hey, I think you’re hot,’ or whatever, something like that. You basically just respond by saying, ‘Great, well, why don’t you go to the Web site and join the mailing list?’ I don’t know if that’s the kind of thing other bands get, but I’m sure it is,” Woods speculates. “It’s kind of interesting to open up an e-mail and some 18-year-old girl says she thinks that Jon (Sweetwood) is cute. It’s nice to hear that kind of news, but it’s better to hear that they like the music.”

Can’t relate, but it all works nicely into The Daybirds’ plan. “We’re just going to try to take over the world,” Woods schemes. “Then we’re going to franchise.” Before that, the group will appear at Grand Emporium on Monday, June 12, with Kristie Stremel and Takedown.

The “we” is simply Millard and drummer Nick Gordon, who played alongside each other a few years back in Chebella. That band — which also featured the lovely Kori Gardner, who now plays in the indie-pop sensation Mates of State, and Ben Tuttle — broke up shortly after opening Day on the Hill in 1997, the year They Might Be Giants headlined. “We just kind of continued to play, but I’ve pretty much played solo for some time now. I got together with Nick, and he put drums to it, but it’s still pretty stripped down. It’s just drums and acoustic guitar,” Millard says. “We’ve been looking for a bass player, but with the acoustic and drums it sounds pretty full.”

Not only partners in disdain for ugly boyfriends, the pair are also partners in business with Artist Workshop. “Nick just got this idea for starting up a record label,” Millard says. “Then he started to get this idea to have a more encompassing site, something that would showcase art and music and writing, just creative things that our friends do. We definitely are open for people to send their work in, and we’d love to see it.” Addresses and all that good stuff can be found at www.artist-workshop.com, which also has samples of Millard’s art, one piece of which was the cover of The Get Up Kids’ Something to Write Home About. For more than a virtual encounter, however, The Ugly Boyfriend will be at The Replay Lounge on Tuesday, June 13, with Chaotic Past.

Back in all his Butterglory
Well, actually, that’s a lie because Butterglory broke up and Matt Suggs, formerly of the late, great Lawrence band, has since relocated back to California. He’s still there too, but his first solo record, Golden Days Before They End, released on Butterglory’s old label, Merge, has just arrived on local shelves like a charming postcard from an old acquaintance. Reportedly keeping close to his lazy pop roots, Suggs plays a new batch of low-key, easygoing songs of the sort that make it still seem unfortunate that Butterglory called it quits. Ranjit Arab, a member of the band in its final days, handles piano and organ on the disc.

Vinyl gladiators
So you want to be a DJ? You think you have skills? Well, here’s your chance to prove it. DMC, the official sanctioning body of the wheels of steel culture, will set up shop at Liberty Hall on June 10. The annual 2000 Technics DMC DJ competition showcases some of the area’s best on the one and twos. The winner will go on to represent at the 2000 Technics DMC U.S. finals in the Big Apple in August. From there it’s on to September’s world championships in London. But first you gotta win the “heat” in Lawrence. The best turntablists in the Midwest will compete in this new millennium sport, where it takes major hand and eye coordination to move the crowd. It doesn’t matter what you spin — drum and bass, urban, dance, or electronica — you just gotta be good with the vinyl. Bring your own needles (the musical kind) and headphones, and let the battle begin. The event will be hosted by Grand Master Caz (Cold Crush Brothers) and feature performances by Spictakular (’99 U.S. DMC runner-up) and Roli Rho (a U.S. DMC finalist several times). — Shawn Edwards