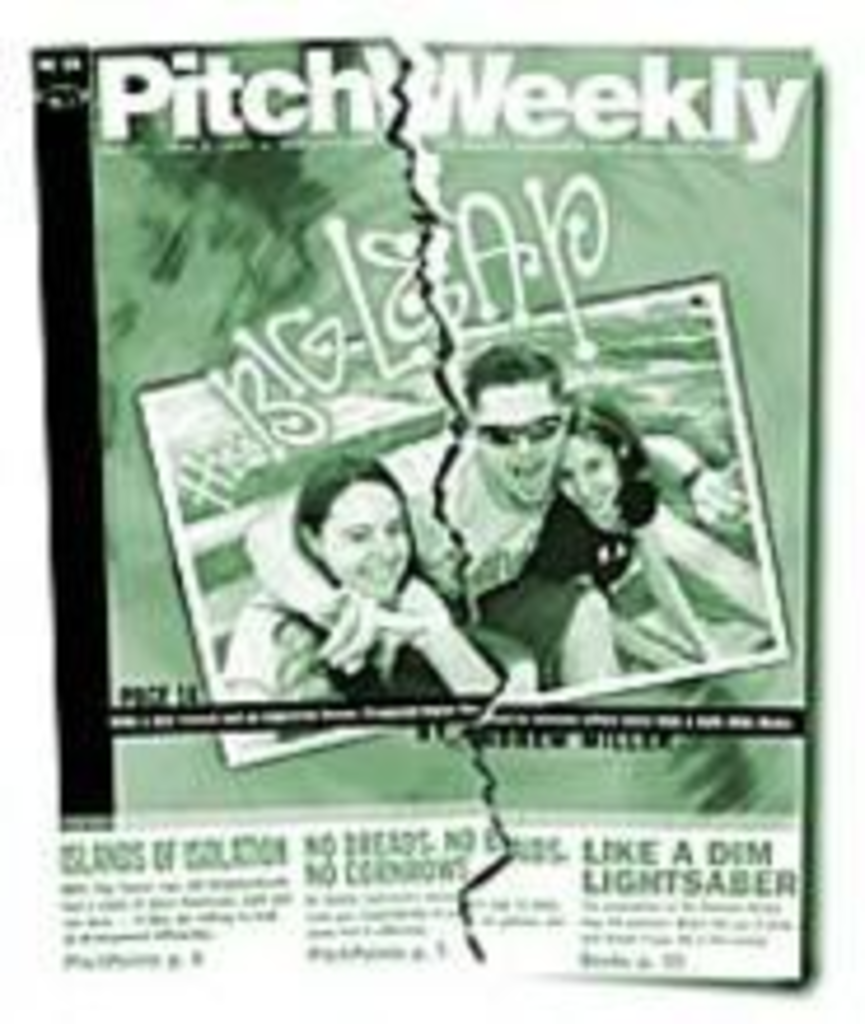 The Safe Ride Home was fun while it lasted, but sadly the journey has come to an end — Frogpond decided to call it quits and park the van permanently. “It’s not like it was a member deal. It was just a bunch of stuff over the years and over the times,” explains Heidi Phillips, who fronted the band all of its six years. “We finished out our tour right before the summer, and I guess by that time it had just kind of gradually got there. It was pretty much me who decided it was time for a change, and we’re still tying up loose ends.”

Those loose ends would be with the latter half of the term “music business” with Frogpond’s former label, C2 Records (a division of Sony). “Just business crap,” Phillips says. “We had a contract with them, and it was in February that we got out of our contract. It was a good thing because they weren’t really doing what they said they were going to do.”

While all that wraps up, Phillips will take a much-deserved breather. “We were on the road so much last year and throughout all the years, and I just want to be home for a while,” Phillips says. “I have a lot of stuff to think about, and I’m not really the same person I was whenever Frogpond first started. When you’re doing this thing for the six years we’ve been together and then all these things happen, you as a person change — or I as a person changed. I’ve just kind of come to this realization that it’s not really fitting with the person I am anymore, whatever that is.”

As for the others, bass player Justine Volpe is on the road with the Indigo Girls, overseeing the merchandise trade. The guys, however, are still actively following pursuits of a musical nature, with drummer Billy Johnson rocking in Onward Crispin Glover and guitarist Marty Robertson doing the same in El Fontain.

And though the swanky Anteye.com kickoff party at The Granada a couple of months ago was the last gig Frogpond played, Phillips says a few more could be on the horizon to obtain that all-important closure that long relationships deserve upon completion. “We still might play a couple shows in September,” Phillips says. “We might want to play The Hurricane and The Bottleneck to finish and make it a good ending.”Oops … they did it again
Now that Frogpond has called it quits, some remaining members might find themselves with a Styx-esque amount of time on their hands. If so, folk songstress Celia and the fine folks at Z’Gwon,Th Studios in Lawrence have at least come up with a way for the femme fatales to stay busy during retirement: a compilation disc of local female artists.

“This is kind of Celia’s project more than anybody’s,” says Lisa Miller of Z’Gwon,Th on the first of what they hope will be many of these collaborations, and Miller and her co-workers will even do some of the work for you. “She just wanted to get one together, and we helped her organize it. But Celia was in charge of deciding who would be on this one, and we just recommend certain people.

“As far as other compilations go, what I’ve told people is that if they get a list together of people who agree to perform on it, and they have an idea of what they want, we can do the rest.”

Sounds easy enough. There’s even some adjustment to the traditional recording costs, and all the performers, instead of the studio, own the CD upon its completion. But with all those incentives, Miller has still run into one unavoidable problem that plagues all independent artists: cash flow.

“What we’re realizing is that artists don’t really have money to record and press CDs on their own,” says Miller. But all artists have free time and a willingness to inflict their craft on others, so the brains behind Z’Gwon,Th put those two together and came up with a plan where everybody plays and everybody wins: concerts whose proceeds go toward the cost of manufacturing a disc.

Unfortunately, the first such event has already come and gone, but CDs can still be preordered for $10 (which still goes to offset production) by calling 785-842-8900, or visiting the Web site at www.zgwonth.com. And don’t fret if you missed the concert; there will be more to come.

“This first disc should be out in the next month,” Miller says. “And then we’re doing a spoken word compilation spearheaded by Robert Baker and Matt Fowler, and they are also going to be doing a house concert. We’re hoping that it’ll become a regular thing and people will say, ‘All right, I’ve got to save my money to go to that house concert this month.'” — J.J. Hensley

This Will Be Laughing Week too
Like Frogpond, plenty of other KC bands have bad stories about major labels that have even worse endings that the bands surely didn’t deserve. However, that hasn’t dissuaded any others from giving it a shot when offered the chance. Eventually there will be an exception to the rule, and it could turn out to be Ultimate Fakebook, the latest band from around here to be added to the majors, its 550 Music debut hitting the shelves but a few days ago. A re-release of This Will Be Laughing Week, first given to us locals by Noisome Records last year, contains not just the 1999 Klammy-winning song “Tell Me What You Want (I’ll Be Anything)” but also a re-recording of the number that took the Song of the Year Klammy in 1997, “Far Far Away.” All program directors, please take note.

You know, for kids
Rock purely for rock’s sake is a beautiful thing, indeed, but rock for not only rock’s sake but also for the kids is perhaps even more beautiful. That’s exactly what will go down at the Uptown Theater on Friday, June 23. Soulmatic, Mustard Couch, Velvet Freeze Sapphire Gin, and Rob Roy Mountjoy — bands that feature some members with kids of their own — will play the all-ages show, bringing the kids what they want while giving something back to them. A portion of the proceeds will go to Children’s Mercy, and donations of nonperishable food, clothing, and other items (in exchange for a discount on the ticket price) will be accepted at the door for City Union Mission. Tickets are on sale already through Ticketmaster at 816-931-3330 or at the Uptown itself.

New! Lazer ear surgery
KLZR, Lawrence’s Lazer, has switched program directors on a pace that rivals the change of seasons since its infamous sale and format shift about a year ago. And every time the station makes a swap at the top, the rumor (read: pipe dream) that the station will return to its long-lost alternative format (which is now practically extinct) begins to circulate again.

So it was when current KLZR PD Rob Meyer took over a few months ago. And while the station hasn’t yet returned to spinning 7 Mary 3 thrice hourly, there are some whiffs of the old Lazer in the air — like the free concert the station held at The Granada on Tuesday, June 13.

“We’re trying to do a series of concerts at least once a month when we can showcase up-and-coming bands and tie that in with our Lazer Local Music Show,” Meyer claims while he namedrops what was once the station’s most popular segment (contrary to popular opinion, this program still exists). This tie-in came with Space Pocket, which performed the inaugural free show with the second most popular band out of Tulsa, Oklahoma (after Hanson), Jacob Fred Jazz Odyssey.

As confident as Meyer sounds now, after the relative success of the first show on an evening of torrential rain, he couldn’t help but question himself before the show got started. “I was a little apprehensive at first to do this simply because of all the backlash that accompanied the format change, and the thing was, I wasn’t here,” Meyer quickly adds. “So I didn’t even get the worst of it.”

In this case, ignorance truly is bliss. Undaunted by the experiences of the PDs who proceeded him, Meyer has set out on a mission to win back the hearts and ears (and with them the ad dollars) of a community that felt abandoned by a station it had helped build into a powerhouse.

“The bottom line is that we are a Lawrence radio station,” Meyer says of the motivation behind the free shows and the bands chosen. “We want to continue to serve the Lawrence area, because people here like that (style of) music and those shows, and we want to continue supporting that.

“We want to give back to the community and continue part of the legacy of the old Lazer. That’s why we’re still doing the Local Music Show and Future Mass Hysteria, so that format hasn’t completely disappeared from our station. That said, we still don’t plan on changing anything that we’re doing now.”

What they are doing now at the Lazer, as Meyer puts it, is “leaning a little more toward the rock end” of the Top 40 charts than their sex-slingin’ brethren at Mix 93 and Z95.

“That (music) is untouched, and it’s the kind of music that people in this area really like. When I came in and saw that ‘N Sync and the Backstreet Boys were the prominent artists on this station, I knew that was wrong for this town. Now, we’re not going back to alternative,” Meyer repeats, “but, on the other hand, there are a lot of alternative artists putting out good music so that I can choose the best of that format and put them on my radio station.”

One of those alternative artists putting out songs so sugary that Top 40 would have been its only purchase a decade ago is Ultimate Fakebook, local heroes and current wards of Sony/550 — the multinational conglomerate currently working This Will Be Laughing Week to whatever alternative stations still exist. So the question has to be asked: What would Meyer do with this title?

“That CD is on my desk right now, and that’s something I’m strongly considering adding in the next few weeks,” admits Meyer. “Now, we may not play them all day, but I’ve seen this band here, and I’ve seen the way the local crowds react to this band, and I know that this record will have a place on our radio station.

Corporate bullshit, or is Meyer the Charlie Sheen to the Zimmer Radio Group’s Michael Douglas in this Wall Street?

“I continue to be dedicated to local music here,” adds Meyer. “I have no intention of severing that tie to the local music scene, whether they like us or not.” — J.J. Hensley