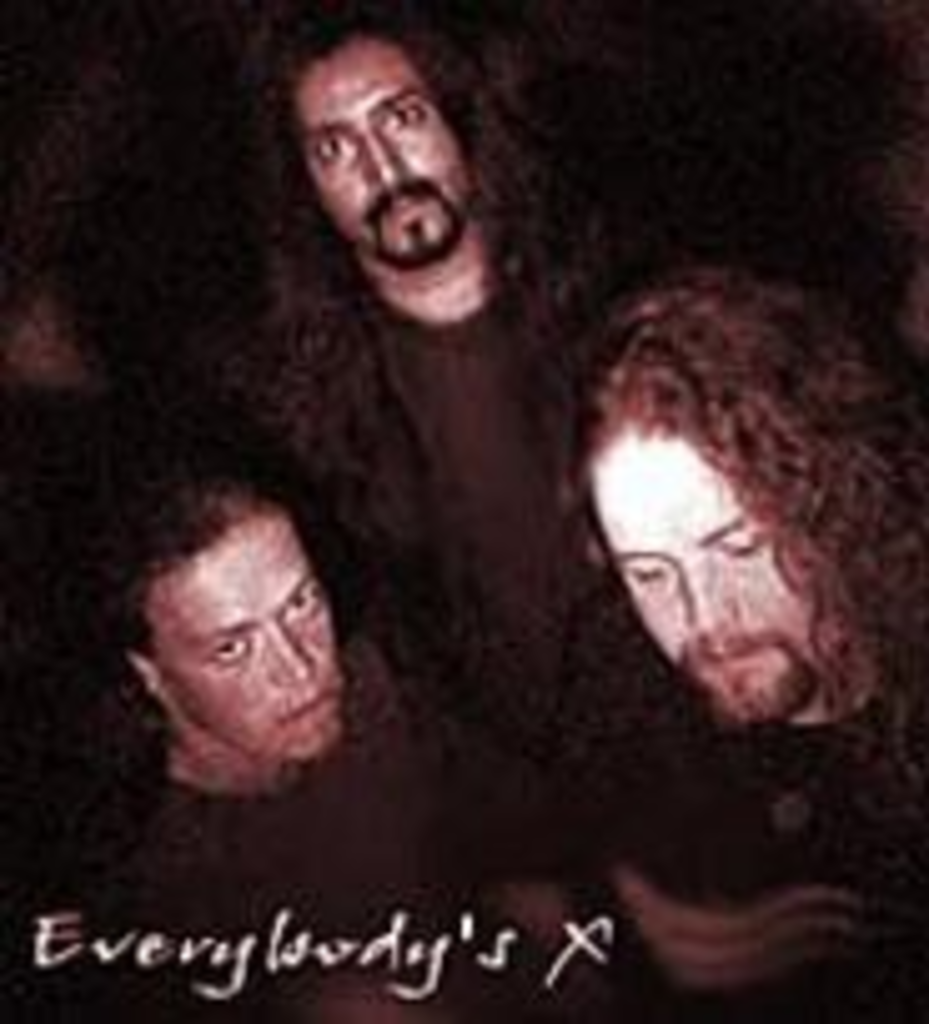 Dave Johnson looked out into the crowd and saw what most male rock musicians dream of seeing — a table full of women smiling at him, tapping their feet and nodding their heads. But as his band, Everybody’s X, finished its tune, he looked expectantly to the table, and to the audience as a whole. Nothing. With every song, it was the same story. The fans seemed to be digging what Everybody’s X was doing, but when Johnson paused for cheers, he received the same painfully underwhelming response afforded recent Saturday Night Live skits.

“Applause time is Christmas morning for a musician,” says Johnson, the group’s singer and guitarist. “When there’s silence, something evil is at work.”

It’s not as if Everybody’s X hasn’t won over hostile audiences in the past. At its first show ever, it opened for metal-health advocates Quiet Riot, and the once-skeptical crowd ended up demanding an encore. When headlining funk-rockers Jimmie’s Chicken Shack failed to show for a scheduled gig, Everybody’s X sent everyone home happy with an extended set. And when the group breaks from its high-volume routine to deliver an acoustic ballad, “it confuses a few WWF fans in the audience,” Johnson admits. “But that’s the fun of it. I love playing sappy love songs in front of death-metal fans.”

Still, something far more sinister was taking place at the Grandview club Filling Station, where Everybody’s X, Canvas, and another group (Johnson calls them Band X) composed the New Year’s Eve lineup. Johnson claims Band X brought along fifty or so friends who clapped only for the headliners, made noise during the opening acts’ sets and loudly yelled Band X’s name between songs. “I’ve seen that happen in a Battle of the Bands type environment, but there was nothing to be gained here,” Johnson says. “The people who came to see us were eventually so uncomfortable in the situation that they stopped applauding us out of fear someone might break bottles over their heads. By the end of the night, I was like, ‘Let’s hear it for Band X, cheer for them, do something.’

“I don’t understand how it accomplishes anything to play to the same forty people you always play to,” he adds. “If you play rock star at the Filling Station once a month to the same guys you just played to at your house, how are you going to expand your fanbase?”

Johnson had an expanded fanbase in mind when he split from his previous group, The Threat (which featured future members of local metal heavyweights Thrust), to branch out into other genres.

“I have a leaning towards harder things, but lyrically I’m more akin to Adam Duritz than James Hetfield,” Johnson explains. “I’m trying to write hard rock for grown-ups.”

This mature undertaking stems from a breakup that led Johnson to pen dozens of cathartic angst-filled tunes. “They’re all designed to be therapy for myself,” Johnson says. “Remember that crazy girl with the acoustic guitar in Say Anything who wrote fifty songs about one guy? I’m her.”

Johnson sells himself a bit short with that comparison; his introspective lyrics have levels of emotional complexity that put Joe lies/when he cries to shame. To metal fans more interested in crunching riffs than clever couplets, such distinctions might not matter, but Johnson says he wants to reach out to open-minded fans. “I don’t understand how all of a sudden sticking out from the sheep is not acceptable anymore,” he says. “There’s a faction somewhere that’s just interested in music and not pigeonholes. And I’m egotistical enough to think that if we play well in front of other people, we’re going to win new fans.”

With that in mind, Everybody’s X is recording a follow-up to its 1997 full-length album. “I can’t stand the old CD,” Johnson admits. “I’m proud of the songs, but it didn’t translate well. It had 1984-style high-gloss production: snare drums from hell, huge canyon echoes. People say, ‘I love your CD, but you suck live,’ and ‘You kicked ass live, but your CD sucks.’ We’re looking for production that, good or bad, sounds like we sound.”

Johnson looks for the disc to be completed by spring, but in the meantime, fans can hear how Everybody’s X sounds at the Filling Station on Saturday, January 27. If you go to the show, be sure to applaud.

Some mischievous upstart groups, emulating Band X’s “success,” might consider committing copycat crimes, but most local promoters are not fooled by a manufactured crowd response, nor do they take kindly to such tactics. “It’s a dog-eat-dog mentality for those groups, but I would never support a band that would stoop to that level,” says Mean Dean, host of KJHK 90.7’s all-metal show Malicious Intent and promoter of metal/hardcore shows in Lawrence and Kansas City. “This is a scene, not a cockfight.”

Jacki Becker, who has booked shows at The Bottleneck, The Granada and the Replay Lounge, among other venues, says she hasn’t seen such a spectacle. “At those clubs, most people are very, very supportive of the scene and the artists,” she says. “We take pride in the other people. It’s a family affair.” Billy Smith, who books bands at The Hurricane, also says he’s yet to encounter such a situation. “There’s no rock-blocking here at The Hurricane. If it happens, I’ll cut the sound and tell them to go home in a second,” he warns.

Such bands might also find themselves blacklisted in their own community, as other groups turn down even high-profile opening gigs to avoid receiving the cold shoulder from a partisan audience. Mark Cuthbertson, guitarist/vocalist for the complex rock trio Q, recalls playing an open-mic show at The Bottleneck several years ago at which another band stationed its fans outside the venue, instructed them not to enter until it took the stage and then to make as much contrived noise as possible during the set and leave immediately after it finished playing. The Bottleneck staff remained unimpressed. “Real music fans would be more likely to attend most or all of the show just to see what else was going on,” Cuthbertson notes, but he was disappointed enough by this incident — and by seeing musicians take cheap shots at one another onstage — to create five guidelines for future shows, putting into writing some of the unwritten ethics of playing concerts.

First, bands should promote, support and assist the other groups on the bill by putting up fliers, sending reminders to their mailing lists and doing everything possible to get people in the door. The next few rules fall under the umbrella of common sense, but frequent concertgoers know these tenets are too often overlooked: arrive early and set up/tear down quickly; keep onstage delays (tuning) to a minimum; don’t overstay your welcome with a too-long set; and be courteous to everyone working at the venue.

Finally, an appendix to Cuthbertson’s list: Don’t wear your own band’s T-shirt on stage. Yes, this long-extinct tradition has lamentably resurfaced at some recent shows. When members of U2 did so at an awards show a few months back, the gesture surely had some hidden ironic meaning that Bono later will explain in depth. However, when an infinitely lesser-known group does so, compounding the faux pas by announcing its name between every song, it’s simply lame. In the film PCU, the clueless fan who wore the shirt of the band he was going to see was branded as “that guy,” but much harsher descriptions await musicians who practice such crass self-promotion.