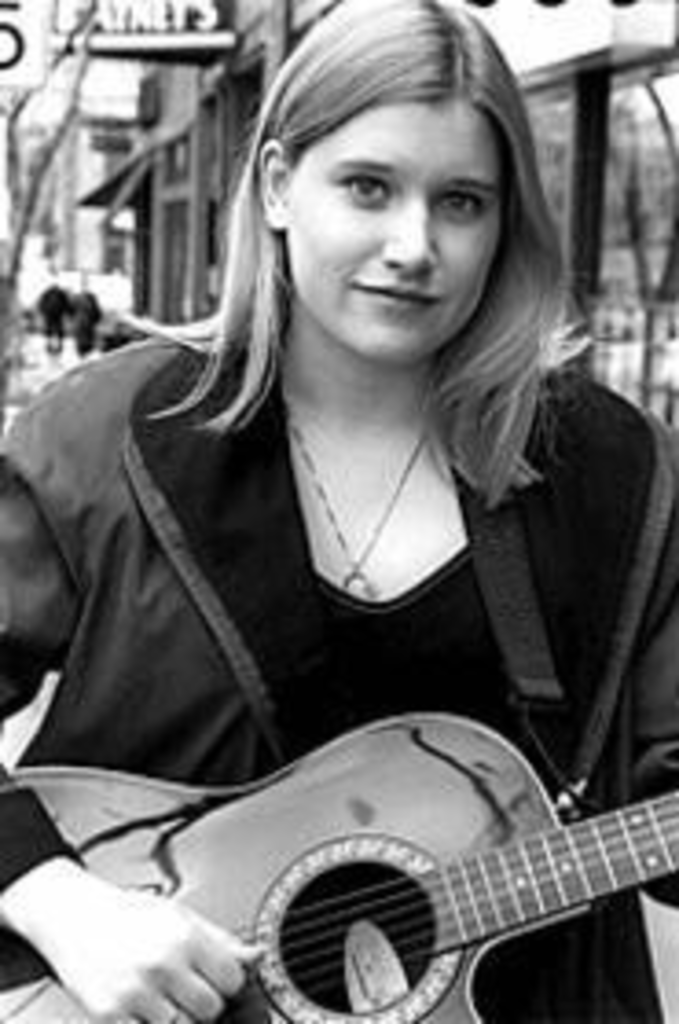 At first, it’s easy enough for cynics to dismiss the fact that nineteen-year-old Corinna racked up hundreds of write-in votes in the Klammies categories for Best Folk Artist and Best Female Vocalist.

After all, anyone with a Girl Scout’s knack for door-to-door marketing could drum up neighborhood support or, as Corinna did, showcase her songs at a variety of Olathe and Grandview bars and coffeehouses while touting the availability of ballots. However, after listening to her emotional bloodletting on the freshly released Chasing the Ghost or seeing her flash an agreeable smile while strumming the acoustic guitar in her lap, even jaded music fans might be able to envision the scene Corinna’s mother/manager, Virginia Fugate, describes.

“They couldn’t sign up fast enough,” Fugate reports of ballot-hungry fans. “People were waving their hands, saying, ‘We didn’t get one.’ It’s an interesting thing — when people hear her sing, hear her music, they usually want to help.”

Corinna couldn’t eke out a victory in her hotly contested categories, but her campaign, unlike ill-fated third-party turns by Ralph Nader and Ross Perot, bodes well for a future election. While introducing her sparkling voice to new constituents with the steady diet of gigs, she also launched a Web site
(www.chasingtheghost.com), and once converts get ahold of her crisply written eight-song debut, it won’t be hard for them to sell others on the ideology. By next April, Corinna might be a lock in her category with larger concerns than the gigs Fugate calls the “local schmocal stuff.”

“We think she’s going to go right to the top,” she asserts.

The view from the peak is all the more satisfying for climbers who started at the base, and despite her youth, Corinna has experienced some harrowing lows. When Corinna was twelve, her father, Mike Fugate, died in a work-related accident. After Corinna moved to California, she looked to drugs and alcohol to numb the lingering pain. She describes experiencing near-fatal cases of alcohol poisoning and waking up in hospitals with blurry recollections of the night before. In short, she’s not just another glassy-eyed star-searcher whose desire to perform was sparked the first time she saw a Jewel video. She has paid her dues, giving weight to the album’s opening line, My eyes are tired from all the things I’ve seen, and her songs provide a map to help others in similar situations. Like Tori Amos, one of her idols, Corinna confronts her demons in song.

“When I quit drugs and alcohol, I didn’t really have anything to turn to,” Corinna says. “I found music, and now I write constantly. It’s a really great release.”

With “Song for Daddy,” she addresses her father’s death, about which she didn’t speak for seven years, with lines such as Didn’t have a chance to say goodbye. The disc’s opening songs, “Chasing the Ghost” and “Somebody Leave a Light on,” both deal with addiction, and the phrase that gives the album its title appears in both.

“‘Chasing the Ghost’ is a term my old therapist used to use,” Corinna explains. “When you’re getting high for the first time, it’s this feeling that you’re constantly trying to recapture throughout the rest of the times that you’re trying to get high, but you never really attain that first high. It’s this unreachable thing, like chasing a ghost. When I was fifteen and quitting drugs, I didn’t really have anything to listen to that was anti-drug. I think this album will help a lot of people to know that they’re not alone.”

To that end, Fugate says she’s mailing free copies of Chasing the Ghost to not-for-profit rehab centers. But while those recipients might find the opening tracks especially relevant, it’s the last song, “Angel Lullaby,” that seems to offer the most therapeutic value. Everything’s gonna be all right, Corinna sings sweetly, her pleasantly arranged guitar melody maintaining the reassuring mood. Her lyrics reveal her belief in angels, and Corinna says that an unseen hand helps to guide her creative process.

“My dad comes and visits me,” she says. “That’s how I get my songs. I hear my dad singing them. I’ll hear music in my head, and then I’ll get my guitar and start playing.”

Corinna’s songs speak to her as well, which eased the process of narrowing the 140 songs she’s written in the past year down to the eight that appear on Chasing the Ghost. “The songs themselves decided which ones were going to go on,” she says. “They’re like my children. Each one has a voice of its own, and not all of them want the limelight. Some of them like coming out more than others. They show up, and they won’t go away.”

Her tunes also can make persuasive arguments during her performances, causing her to alter her set list. But given that she often plays in bars, she can get confusing messages from her anti-substance-abuse selections. “It’s kind of difficult, singing about drug addiction to people who are in the bathrooms getting high,” she admits. “It’s kind of funny: I’m a recovering alcoholic, and I go and sing in bars. It used to be a little harder, but now music’s my new drug of choice.”

Still, Corinna prefers the relative serenity of coffeehouses, where, without competition from clinking glasses and pick-up lines, her lyrics have a better chance of reaching listeners and eliciting responses. Once her words make it through, Corinna’s music provokes dramatic reactions, from tears to gifts. “As a performer, when I get up onstage I work as a mirror,” she says. “What the audience gives to me, I give back to them tenfold. What they give to you, like love, they’re trying to give to themselves. And the coolest part is when people come up to you and say, ‘Thank you. I’m going through this right now.'”

Even if Corinna does move on to the next level — and as an attractive, prolific singer/songwriter with a versatile voice and a knowing perspective, she has a shot — she promises not to let the powers that be soften her autobiographical edge and steer her toward fluffier relationship-based fare. “It has to have depth to it,” she says. “There are layers to my songs, and I’m not sure that there are that many layers to people like Britney Spears.” (She makes this diplomatic assertion without irony.) “If it’s not honest, there’s no point in doing it.”