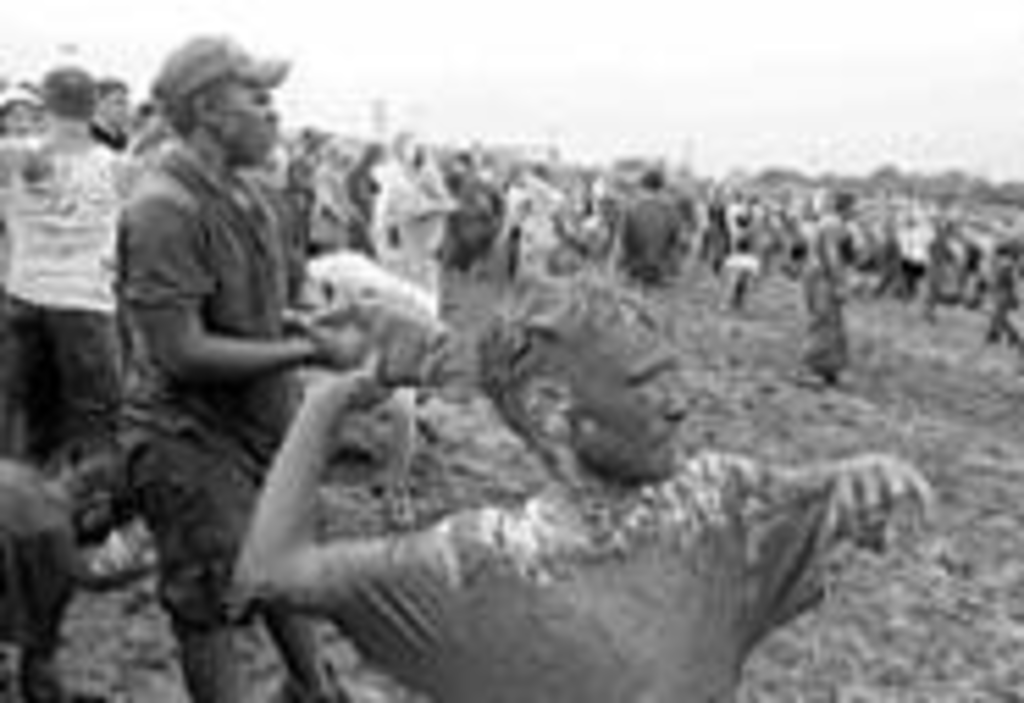 The catch phrase at this year’s OZZfest was “Give yourselves a hand” — as performer after performer saluted the tired troopers in the audience. (The actual quote was more like “Fucking give your fucking selves a fucking hand!” For the remainder of this article, however, gratituitous profanity will be eliminated from reports of stage banter — for brevity’s sake). It’s a tired, applause-mongering tactic, one that ranks along with repeating a city’s name and throwing out rhetorical questions such as “Do you like the weed?”

But given these circumstances, even the musicians must have taken their meaning to heart. Even though it was a sixty-degree day, the temperature seemed to have dipped below freezing thanks to the ceaseless downpour that deposited roughly an inch of chilly water on metalheads throughout the twelve-hour festival. Yet nearly all of these fans, ludicrously attired in summer gear and carefully covered in sunscreen, braved conditions that included hail, projectile mud clumps and cringe-inducing T-shirt slogans until the last group played.

For anyone who wonders how Kansas City can support so many hard-rock bands, one look at the OZZfest crowd — headbanging, whooping, shouting unprovoked obscenities, all without any noticeable acknowledgement of their near-arctic surroundings — could explain it all. Give these people loud guitars, gruff vocals and a rhythm section capable of mimicking the real-life thunder that rumbled throughout the concert, and they’ll go anywhere, and endure anything, to be part of it. Their willingness to stay until the end of the evening wasn’t a thrifty one — granted, tickets ranged from $50 upward, but patrons willing to pay $5 for beer despite the fact that the incessant rain soon rendered it as potent as O’Doul’s can’t be considered pennywise — but rather one based on loyalty and respect. After all, the headliner was Black Sabbath, creator of mighty epics such as “Iron Man” and “War Pigs” and undisputed king of all things heavy, and leaving before its set was complete would be first-rate blasphemy in the Metal Church.

Sacrilegious or not, I departed before Sabbath took the stage. My chattering teeth had long since overpowered the music and my numbing ears couldn’t have appreciated its majestic offerings anyway. Still, I was there long enough to see and hear plenty of priceless material, so here it is: OZZfest, by the numbers.

· $14.99: The sum one overjoyed fellow claimed to have paid for pot in the parking lot. “That’s a great price,” he raved to his friends, who merely agreed instead of asking follow-up questions as: Did they give you back your penny? Was shipping and handling included? Is this a free trial offer? Did it come with a Ginsu knife?

But if wearing the shirt of the band you’re going to see is geeky, what does that make purchasing, and then immediately wearing, a shirt that lists dozens of groups you’re about to see? Well, in this case, it was probably just a health decision, as shivering fans clad only in tank or bikini tops sought warmth at the merchandise booth. And it was likely an upgrade as well, since people who opted against the OZZfest shirt instead sported slogans such as “You say psycho like it’s a bad thing,” “My mom said I could be anything when I grew up, so I became an asshole,” and the ever-witty “FBI: Female Body Inspector.”

· $5. Cost of a rain poncho, the day’s second-most popular fashion statement. Brisk sales of this item allowed Sandstone to compensate for lost water bottle revenue, but the venue missed out on the opportunity to import a fast-sewing crew to stitch together some toasty-warm Slipknot-style jumpsuits, which probably would have sold out within an hour.

· One. The number of tattoos that read simply “Tattoo.”

· 2.30 inches. The record rainfall on June 19, 2000, a year prior to this OZZfest. For anyone with a 2002 calendar, it’s probably worth penciling in “dress warmly, bring an umbrella” on 6/19 to avoid baring the brunt of the annual monsoon.

· Two. The number of times the sun peaked through the dense cloud covering, resulting in the day’s largest explosions of applause. The groups that benefited from these sun cameos, Union Underground and Mudvayne, seemed to be crowd favorites, and not just because their sets coincided with brief periods of respite from frigid misery. When Union Underground asked “How many of you out there are Union Heads?,” they received the loudest response to that inquiry since the national organized labor rally. That group’s crunchy grunge-tinged sendup of the music industry, “Turn Me On, Mr. Deadman,” was one of OZZfest’s most popular singalongs — even moshers in the churning pit shouted the words as they crashed into each other. Bizarrely echoing the key attractions of lightweight women’s magazines, Mudvayne entertained with make-up modeling (the drummer’s head was on loan from the Blue Man Group; the bassist’s combination of charred skintone with bushy facial hair brought to mind the unfortunate Ted Danson blackface incident; the guitarist was a dead ringer for Darth Maul) and helpful advice (“Always break stuff” and “Point your finger in their face and tell them, ‘Don’t question my relationship decisions'” being the most poignant).

· One. That’s the number of equally musically and visually compelling acts at OZZfest. (Sabbath excluded). Marilyn Manson delivered a blistering set, opening with the incendiary “Irresponsible Hate Anthem” and breathing fire into a number of selections from his latest disc Holy Wood, including “The Love Song,” which answered his hammering “Do you love your God, Guns, Government?” with a brainwashed “Fuck yeah!” His stage show included a brilliantly constructed cross made from firearms, in addition to a series of stilt-aided costumes that saw him standing more than thirty feet above the stage. But in addition to cementing his reputation as rock’s premier showman (a title he more than wrestled away from Slipknot, whose performance offered little more than pop-gun explosions and hydraulic-mounted drumsets), Manson demanded new respect for his songs, which became undeniably powerful in a live context.

Slipknot’s tunes, especially its death-metal inflected unreleased tracks, were strong as well, helping to distract attention from the fact that its jumping-lunatics-in-scary-masks schtick plays infinitely better in clubs. Godhead, an upstart group signed to Manson’s Posthuman Records, did its Antichrist mentor proud with a suitably spooky set filled with eerie industrial beats and cynical societal observations. It headlined the third stage this year, but Godhead promises to rise through the ranks like similarly named Godsmack to become a genuine main-stage early-evening attraction. Hatebreed, which rivaled Slipknot as the fastest, most brutal band on the bill, pummeled early arrivals with thick riffs and double-bass-pedal-powered drumbeats, but as a representative of the punk scene, it eschewed the costumes and flashy logos so many of its tourmates employed.

Its music isn’t as interesting as that of the aforementioned groups, and its performance coincided with a wave of bone-chilling winds, a brief rash of hail and the day’s heaviest rain, but Papa Roach won over plenty of fans thanks to the sheer exuberance of singer Coby Dick. After apparently downing pep pills for breakfast, lunch and an early dinner, Dick twirled his microphone like a baton, aerobicized like a burly Richard Simmons and made a Vaudeville show’s worth of exaggerated facial expressions. He also smeared grime all over his face, becoming mud brothers with the crowd in the process, and thanked his fans with inappropriately morbid sentiments such as “Sometimes after I play, I just want to put a bullet in my brain, but you guys are great!”

· 32. A rough estimate of how many fans, out of the thousands in attendance, who took the slightest interest in the main stage’s freak-show-refugee MC, who performed such shockingly non-shocking feats as eating a worm. Dude, that’s so second-grade.

· Zero. The number of local groups on the bill. Recent Interscope signees Puddle of Mudd certainly would have been a perfect fit, given the preponderance of puddles of mud throughout the venue, but Sandstone fans will have to wait until the group’s August 11 gig with Deftones and Godsmack to hear the KC-boys-done-good play the big stage again. On the road now, Puddle of Mudd is surely getting its share of strong responses, but it must be comforting to know that when the band comes home, Kansas City’s metal fans — come rain, snow, or, as is a virtual certainty for an August date, hundred-degree-heat — will not only turn out, but cheer, dance and cuss at full blast.