The audit, and the myth of a fraudulent presidential election, has been the centerpiece of former Missouri Gov. Eric Greitens’ bid for U.S. Senate 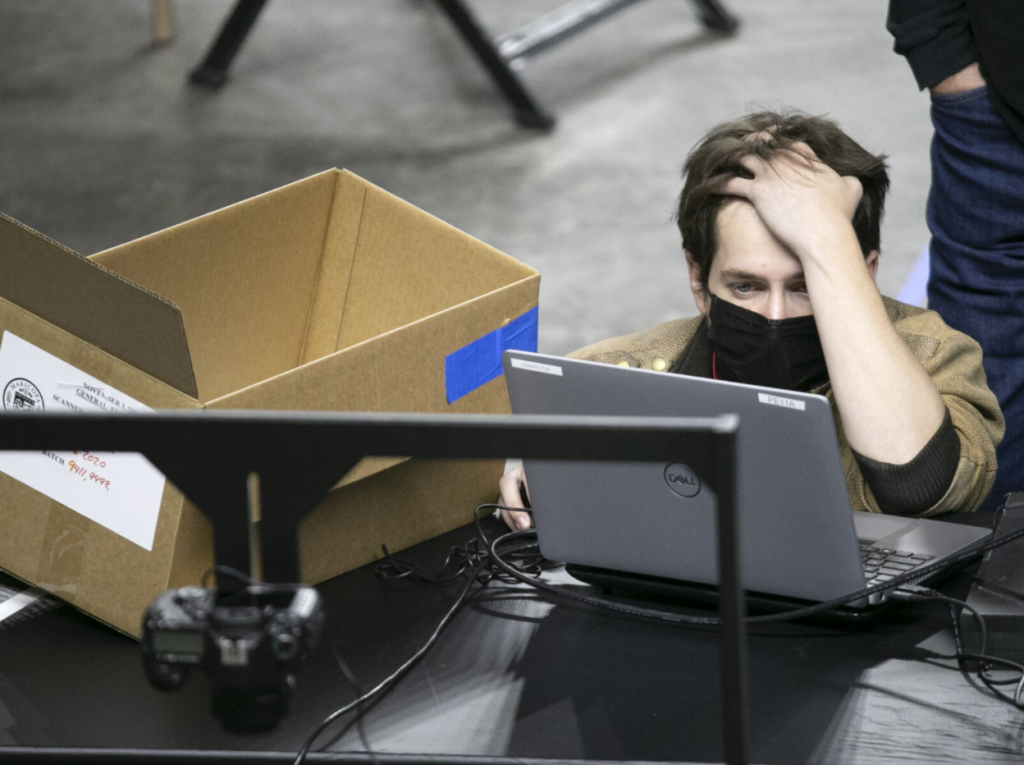 Maricopa County ballots from the 2020 general election are examined and recounted by contractors hired by the Arizona Senate in an audit at the Veterans Memorial Coliseum in Phoenix on May 24, 2021. // Photo by David Wallace | Arizona Republic/pool photo

Draft reports from the review of Maricopa County’s election results declared that a hand count of nearly 2.1 million ballots from the November 2020 election found Donald Trump had 261 fewer votes than the county’s official canvass gave him, while Biden had 99 more.

All told, Biden gained 360 votes in the Senate “audit” hand count — which was criticized by election experts as fundamentally flawed — giving him a victory of 45,469 votes in Maricopa County.

The “audit” team is scheduled to unveil its findings to the Arizona Senate Friday afternoon. But three draft reports that began circulating on Thursday show what audit critics have long argued — that the election was conducted fairly and the votes counted accurately.

“This means the tabulation equipment counted the ballots as they were designed to do, and the results reflect the will of the voters. That should be the end of the story. Everything else is just noise,” Jack Sellers, chairman of the Maricopa County Board of Supervisors, said in a press statement Thursday night.

The audit reports also showed no evidence of fraud or malfeasance that might have changed the election outcome in Arizona.

The reports make a number of claims about ballots that might be problematic for different reasons. But it leaves the issues open-ended and makes no conclusive statements. The findings suggest that the audit team did not investigate those claims more deeply to determine their validity before compiling the reports.

For example, one section claimed that the review found 10,342 “potential voters” who had voted in multiple counties in Arizona, based on voters with identical first and last names, middle initials and birth years. The report said it’s possible for multiple people to share those details, but that the list “should be fully reviewed.”

The report does not state why the audit team did not conduct such a review.

State law permits voters to request that their early ballots be sent to a temporary address.

The draft report also claims that 23,344 early ballots were cast by people who shouldn’t have received them because they moved — a conclusion reached by comparing the names of voters who cast ballots with information from a third-party data vendor. Another section claims 9,041 people returned more ballots than they’d received, though the report acknowledges that there could be legitimate explanations for why the records said that.

The executive summary of the report — which did not mention the results of the hand-recount that took more than 3 months to complete — also concedes that many of the alleged concerns the review found could have been allayed if the county had cooperated with the audit. The county has steadfastly refused to cooperate or participate, to the point of refusing to even answer questions about election policies and procedures. That has presented a problem for the audit team, which has no background in elections work.

“Had Maricopa County chosen to cooperate with the audit, the majority of these obstacles would have easily been overcome. By the County withholding some subpoena items, their unwillingness to answer questions as is normal between auditor and auditee, and in some cases actively interfering with audit research, the County prevented a complete audit,” the summary read.

Sellers said there was a good reason the county refused to cooperate.

“How could we cooperate with an inquiry that was led by people who have no idea how to run any election, let alone one in the second largest voting district in the United States? The Board approved the election plan, we hired and supported our election experts, and they produced a well-run and accurate election in accordance with Arizona law,” he said in his press statement.

It’s unclear whether or how the final reports that audit team leader Doug Logan, CEO of the Florida-based company Cyber Ninjas, will present to the Senate on Friday will be different from the draft reports. Two spokespeople did not respond to inquiries from the Arizona Mirror, nor did Logan, who has almost entirely refused to speak with news media since being chosen him to lead the audit in March.

Arizona Sen. Wendy Rogers, R-Flagstaff, one of the legislature’s most fervent advocates of the audit, claimed on Twitter that she’d spoken with Logan and that he told her the leaked drafts that were circulating Thursday night were only drafts and were partial reports.

Rogers recently travelled to Missouri this month to endorse the Senate bid of former Gov. Eric Greitens, who has made the audit — and the “Big Lie” of a stolen 2020 presidential election — the centerpiece of his campaign. On Friday, he tweeted that Arizona should decertify its election results, something experts say is not possible.

We MUST have forensic audits across the country!

If Logan’s findings were in error, it wouldn’t be the first time. He has a documented history of making demonstrably false statements that were disproven by election records he already had in his possession.

During a presentation in July to Arizona Senate leadership, Logan claimed the audit found 74,000 votes cast by people who had submitted early ballots but whom records did not show had requested them. The votes were actually cast at in-person early voting centers after the deadline to request early ballots by mail, which Logan could have easily found for himself based on the county’s master list of people who voted in the election, which he had.

In a note appended to a section about mail-in ballots being received without any record of them being sent, Logan’s team wrote that the claim was “unintentionally misleading” and was intended only to serve as advocacy for door-to-door canvassing of voters to determine if they really voted.

The results of the hand count, whatever they are, were the result of a process that election experts have long described as flawed and highly error-prone. The audit team, which had no practical experience in elections-related work and often displayed a lack of knowledge about basic election processes and procedures, spun ballots on turntables while workers counted the votes in the races for president and U.S. Senate.