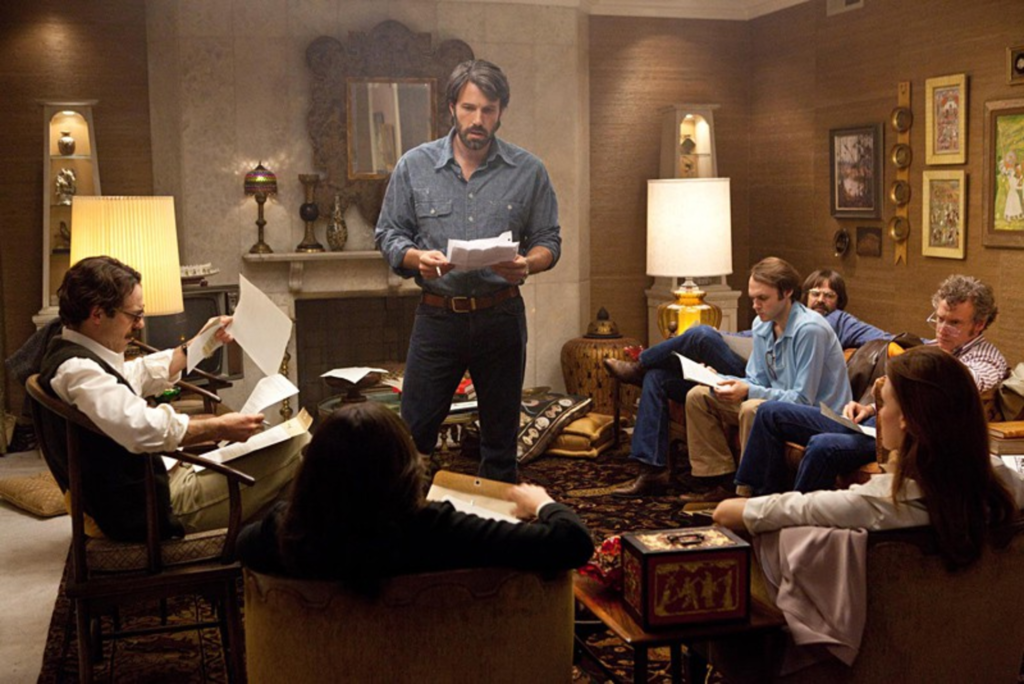 History calls Jimmy Carter’s presidency a failure for two primary reasons: the era’s crippling inflation (which began under Nixon and spiked under Ford, though Carter’s policies certainly didn’t help) and his administration’s response to the Iranian hostage crisis that began in November 1979. Argo, actor­director Ben Affleck’s new film, revisits the latter by telling the inside story of an unorthodox rescue mission, the details of which were declassified during the Clinton administration.

The movie’s own stealth mission seems to be the rehabilitation of Carter’s term. This hazardous, impromptu rescue attempt required split-second presidential approval — it was not for wusses. And as Argo‘s opening sequence makes clear, the hostage crisis itself was a fairly direct result of this country’s longtime support of the shah’s savage regime and the asylum he found here following the Islamic Revolution. (Our other puppet thugs around the world needed to see that we would back them up in a jam.) So that’s Jimmy Carter, folks: no apologies.

Apology is a recurring theme this election year, when Americans must choose between a president some claim apologizes too much and a billionaire rival many feel hasn’t apologized enough. (Naturally, Mitt Romney is the one with a book titled No Apology.) There’s something bigger and thornier underlying this issue: American exceptionalism and its demand that our leaders radiate resolve. But it’s a complicated world. Resolve is just another word for steely machismo, and a show of it isn’t always the way to get things done. Sometimes it takes diplomacy; sometimes subterfuge is required. And, yes, sometimes, a wrong must be acknowledged, along with a pledge that we’ll get it right next time. (Carter tested that last strategy, and look where it got him.)

Argo shrewdly plays up the diplomacy and the subterfuge, seizing upon an odd historical footnote that presented the president with both circumstance and opportunity. Just before the fall of the U.S. Embassy in Tehran and the roundup of American hostages, six foreign-service employees managed to sneak out a side exit and make it to the home of Canadian ambassador Ken Taylor (Victor Garber), who concealed them while the U.S. government hatched an extraction plan.

The story is undeniably rousing, all the more so for being (mostly) true. What’s more, the tension of multiple lives hanging by the thread of preposterous lies — spiced with Terrio’s pungent Wag the Dog-isms (“You scared of the ayatollah? You haven’t gone up against the WGA!”) — all but guarantees riveting cinema. Affleck the director navigates several complex plot strands, negotiating around them like an ace air-traffic controller.

Nevertheless, Argo leaves a somewhat sour taste. In its exacting re-creation of the sounds and textures of the hostage crisis, as well as its aggressive mood, the film seeks to return us to a moment when the geopolitics of the Middle East were fairly cut and dried, at least as far as most Americans were concerned. We were the good guys, and a bunch of angry barbarians chanting “Death to the great Satan!” was holding our people. Nothing much mattered beyond that. Argo‘s prologue explains the U.S. role in installing the shah (and in the 1953 overthrow of Mohammad Mosaddegh), but the thrust of the film is about seeing post-­revolutionary Iranians as an angry, non-subtitled horde, just as they were on TV in the 1970s.

And, of course, liberal Hollywood saves the day. Part of the subtext of Argo is that, though hardliners and butchers they may be, these gun-toting Shiites are no more immune to the charms of American storytelling than anyone else. In a pivotal scene, the escapees must clear one more hurdle: the Revolutionary Guardsman questioning the veracity of their cover story. He presses them: What is this sci-fi movie, this Argo? Under threat of death, Joe Stafford (Scoot McNairy), the only member of the embassy team fluent in Farsi, explains the plot as a tale of peasant revolt, in which a wise man leads emboldened farmers to rise up against a tyrannical alien king.

That’s right: He sells a cheap-ass fantasy B-movie as an allegory of Khomeini’s vanquishing of the shah. Thirty-plus years later, President Ahmadinejad will return the favor, by trying to confiscate every satellite dish in Iran and sending master filmmakers like Jafar Panahi to jail. Argo, for what it’s worth, reminds us of the links between cinema and power. It simply puts back what the CIA left on the cutting-room floor: the cinema.