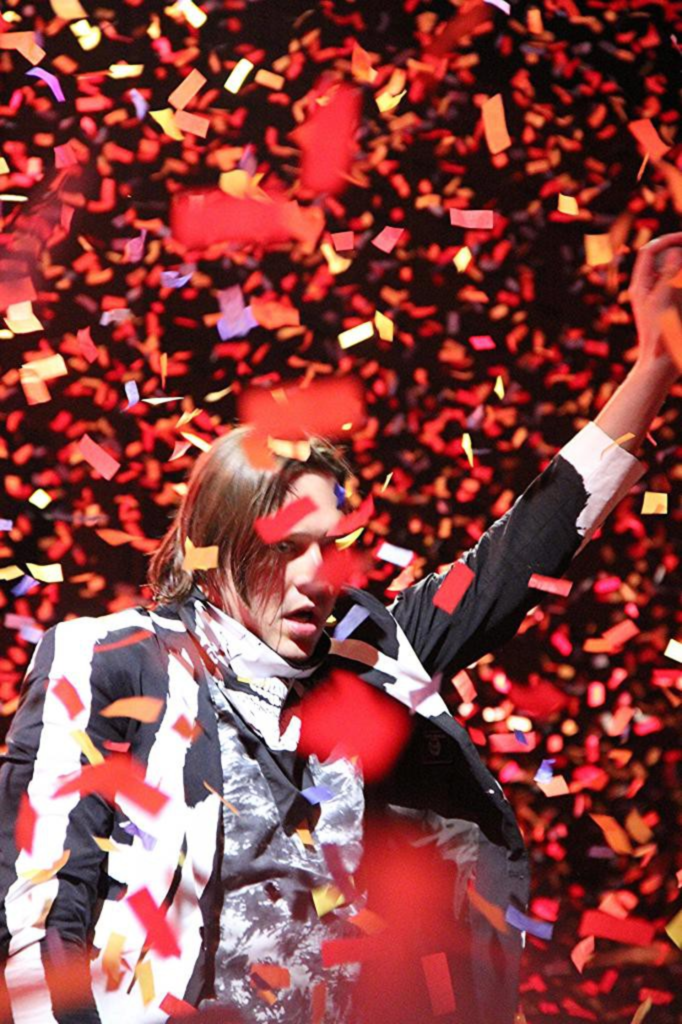 Few bands are capable of inspiring such fan fervor (or inspire as much hipster hating) as Arcade Fire. When frontman Win Butler spontaneously performed a DJ set at the Union in Westport on Friday night, it inspired a mad explosion on social media among Kansas Citians – which, inevitably, was followed by blowback from those annoyed at the social-media hype. Yet, even those most irritated at their Friday Facebook interruption, or those inclined to roll their eyes at the headiness of the two-disc release of Reflektor or at Arcade Fire’s call to its audiences on this tour to dress formally or in costume, might just have felt a little differently after Saturday’s KC appearance.

It proved tough for anyone at Starlight to resist the high energy of the band’s 12-member touring lineup, or the visual spectacle that was brought in literally on ten semi-trucks. Most of all, the atmosphere was electric – particularly when the quintet of young women, all barefoot and in bright dresses, skipped and danced by our seats as Regine Chassigne belted out “Mountains Beyond Mountains” – it felt like joyful release, and the show even at nearly two hours flew by. 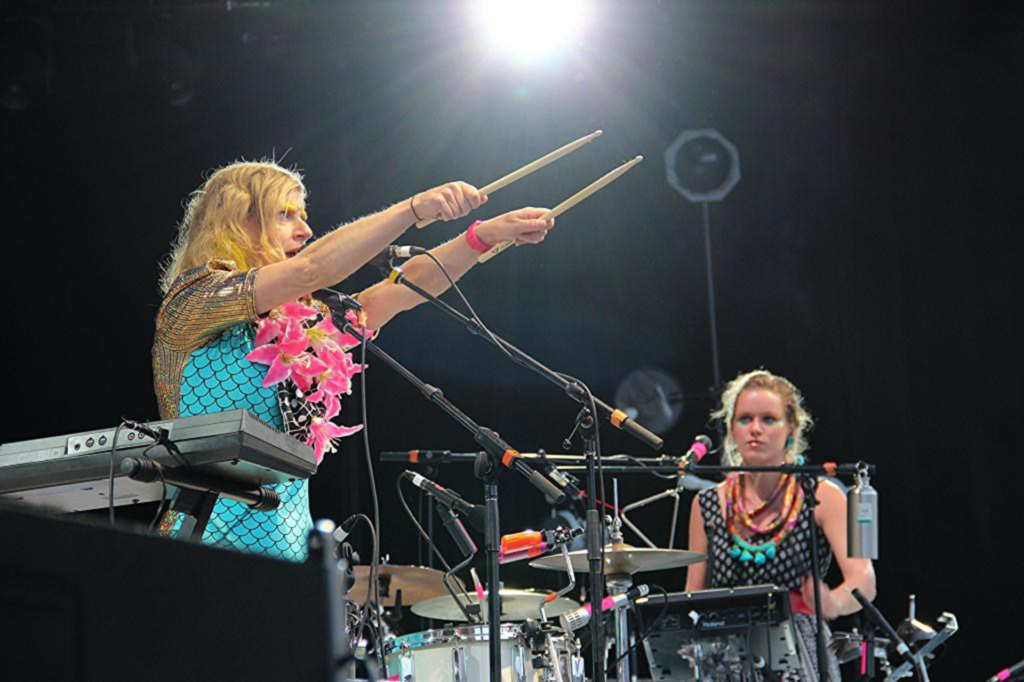 tUnE-yArDs’ Merrill Garbus seemed to have taken a note out of Arcade Fire’s playbook and has expanded her touring band to five members from its regular two. The venue was only beginning to fill up as Garbus and her bandmates took the stage to open the evening, costumed in the spirit of the night. (Making Movies was also playing in the parking lot as we showed up, apparently invited by Arcade Fire.) Garbus belted to those dancing beyond the largely empty pit with the brassy, bold voice for which she has become known. The crowd picked up noticeably for the band’s performance of “Gangsta,” which is an impressive song on its own merits but requires real chops on Garbus’ behalf to perform.

About 20 minutes following a DJ set from Yo Gabba Gabba contributor and electronic musician Kid Koala, the venue’s lights were killed, and the members of Arcade Fire began assembling onstage, some threading in through the crowd wearing goofy papier-mâché likenesses of themselves, having to climb over barriers to get to their instruments. The band opened with “Here Comes the Night Time,” a bouncy dance song off 2013’s Reflektor – and wasted no time getting down to party business, as the confetti cannons rained down little bits of water-soluble paper all over the Starlight audience. (This was also Starlight’s first show of the year, and better weather could not have been ordered.) 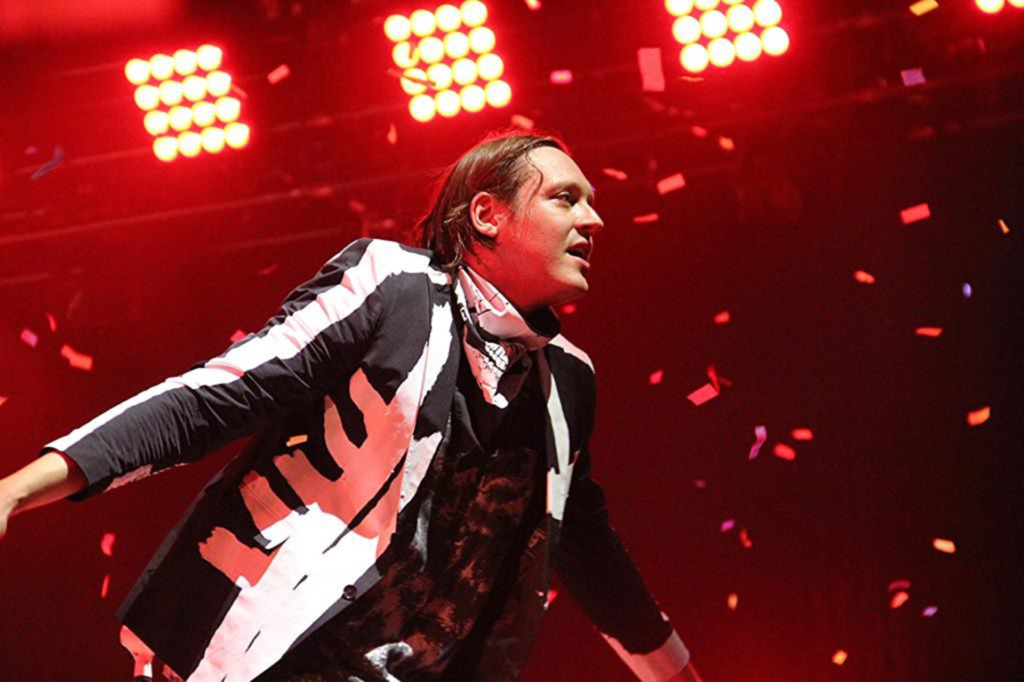 To the displeasure of Starlight’s relatively strict crew of ushers, Butler urged the crowd to dance in the aisles, to join in the party. The band kept up the early energy, running through “Flashbulb Eyes” and the barn-burner from their debut album, “Neighborhood #4 (Power Out).” Initially there were so many people in the aisles that it was hard to move to my seat, and throughout the evening the ushers worked valiantly to keep aisles relatively clear. 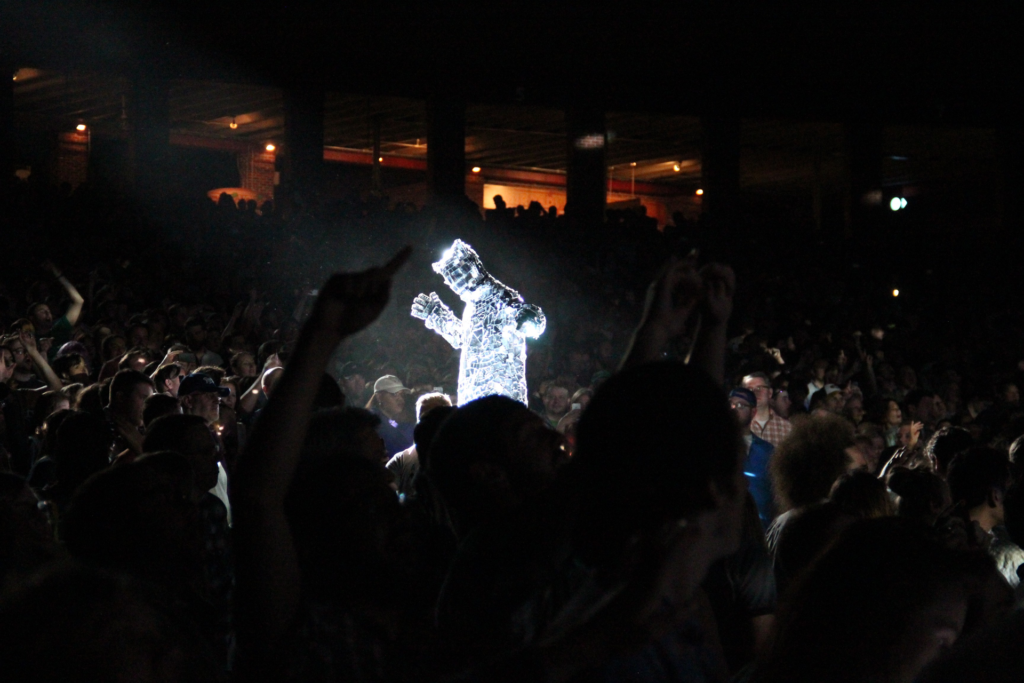 This duty was made all the more difficult by the band’s visual surprises, even in the middle of the audience, including a slowly dancing human mirror ball, who rotated and glinted light throughout the venue during the performance of “Afterlife,” as the big bass saxophones bounced in the background, and the band’s percussionists wailed on their drums. The band’s high performance polish was impressive – Win Butler is the consummate frontman, and the supporting members of the band, including horns, strings and percussion, were spot-on enough to choreograph some of their moves. The only hiccup occurred during “Joan of Arc,” when the band missed a cue of some kind, omitting a late verse. Régine Chassagne looked over at Win Butler, who returned the glance and put his hands up, shrugging as if to say, “What are you gonna do?” 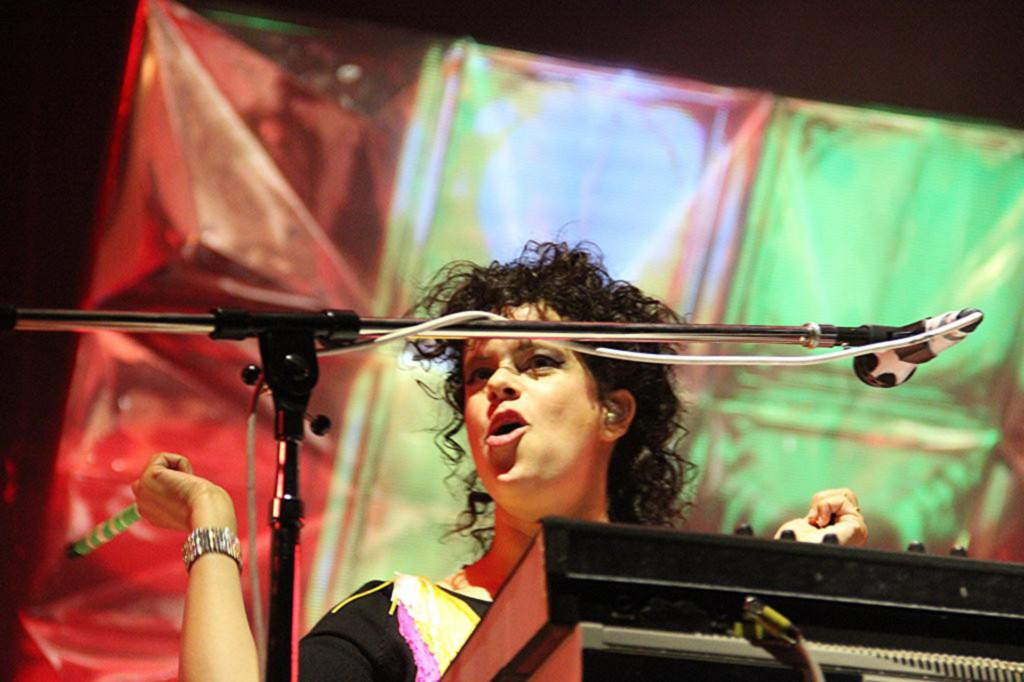 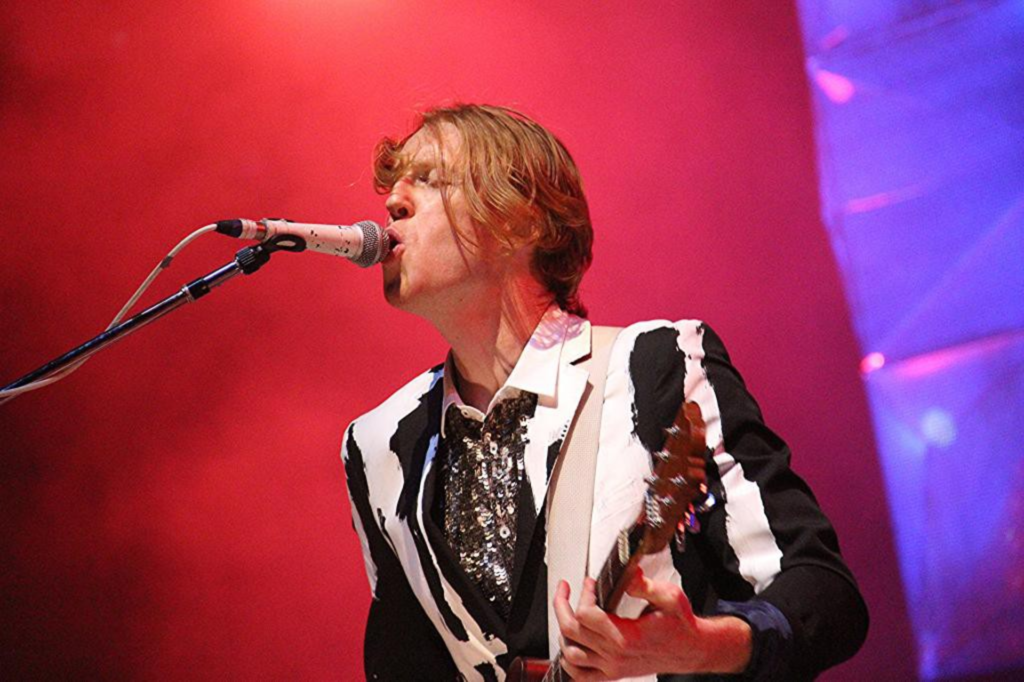 I regret not having seen Arcade Fire’s performance with LCD Soundsystem at Starlight a few years back, but did catch their performance at the Jackpot in Lawrence shortly after the release of Funeral. The band has expanded its touring membership from about seven to 12,  including two new percussionists who flavor the Haitian-inspired drumlines featured on Reflektor.

A lot else has obviously changed for the band since the time it packed in the small Lawrence venue, but what still is wonderfully apparent in the band from that early performance to now is how much it seems to love what it does. At the Jackpot show, Richard Parry (pictured above), wore a helmet, and using his drumsticks, pounded out a beat on any available surface, getting so into the performance that he punched drumstick holes in the ceiling of the venue. His role as multi-instumentalist has since expanded, but his energy is as high as when the band was all packed together on that tiny stage. 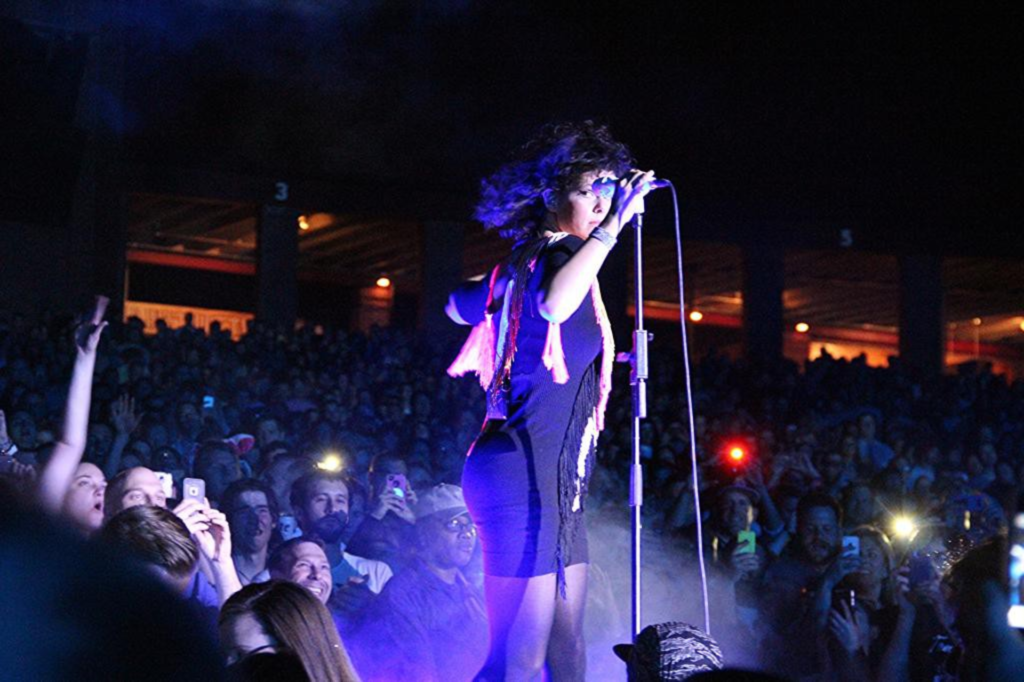 And no one (even the camera-loving Win Butler) seems to relish performing as much as Régine Chassagne. Her voice is not the strongest aspect of her performance – it’s her assured presence and her abilities on a variety of instruments, including percussion, piano, accordion and more – in addition to her clear comfort and love of being onstage. She shines deeply – and on “Sprawl II (Mountains Beyond Mountains),” in which she rails against those who’d tell her to stop singing, to “quit these pretentious things and just punch the clock,” she felt like the soul of the band. It was then that I saw the girls dancing barefoot and moving through the crowd. The timing was perfect, and they were lovely. 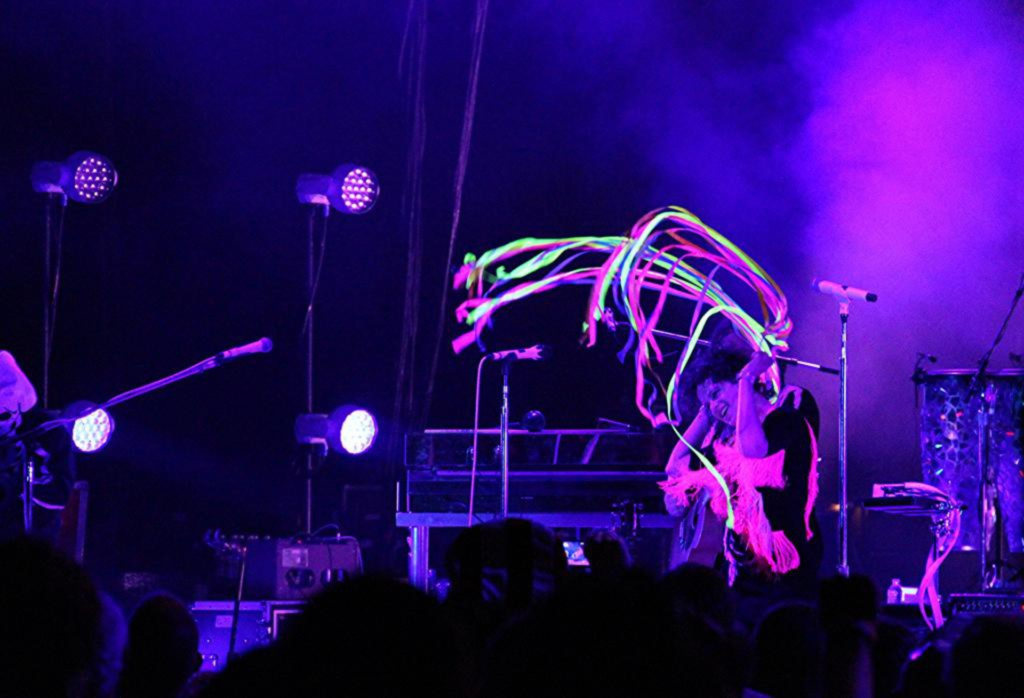 For the encore, the audience was treated to a brief performance of Kansas’ “Dust in the Wind,’ performed by “The Reflektors,” in this incarnation a few members of Arcade Fire including Richard Parry, Tim Kingsbury and Will Butler, as well as the members of  tUnE-yArDs, again decked out in the papier-mâché heads, which now included likenesses of Arcade Fire band members as well as world leaders including the pope and President Obama. Win Butler emerged back onstage to stop the song: “Sorry guys, we fucked it up. That’s a Kansas song, and we’re in Missouri. Maybe next time we’re in Lawrence.” 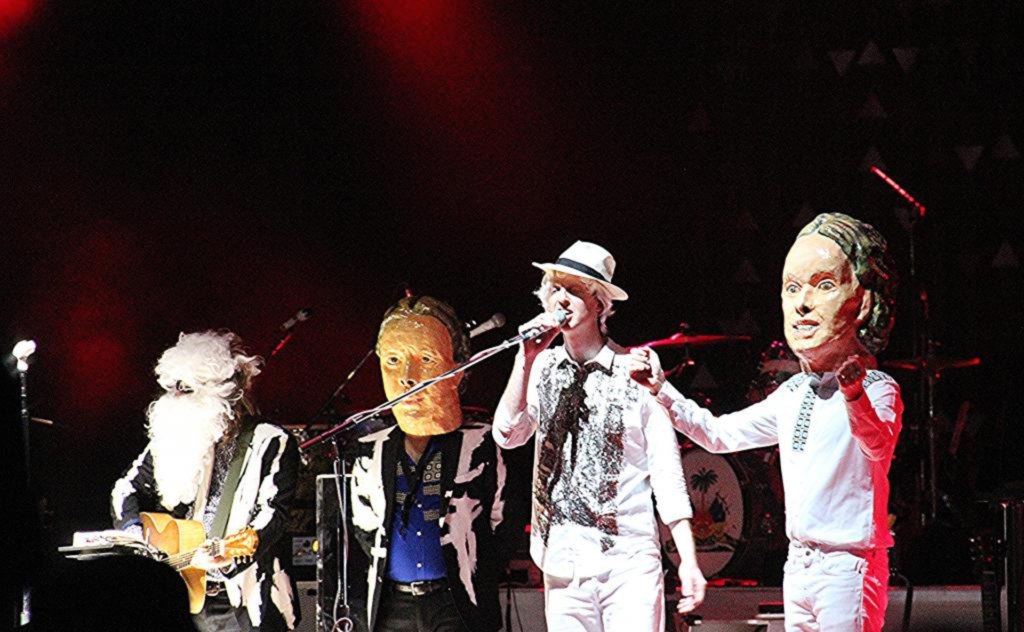 The confetti blasted one last time for the show’s closer, “Wake Up,” perhaps the most anthemic song from an act well-known for its high crescendos and group choruses. The papier-mâché heads bobbed onstage, and the ushers had to abandon their last efforts at keeping the aisles clear. The audience responded with intense fervor, even joy (it is, after all, basically impossible not to be happy with everyone around you singing as confetti rains down). I think Starlight can go ahead and call it a season – it’s not going to get any better than that. 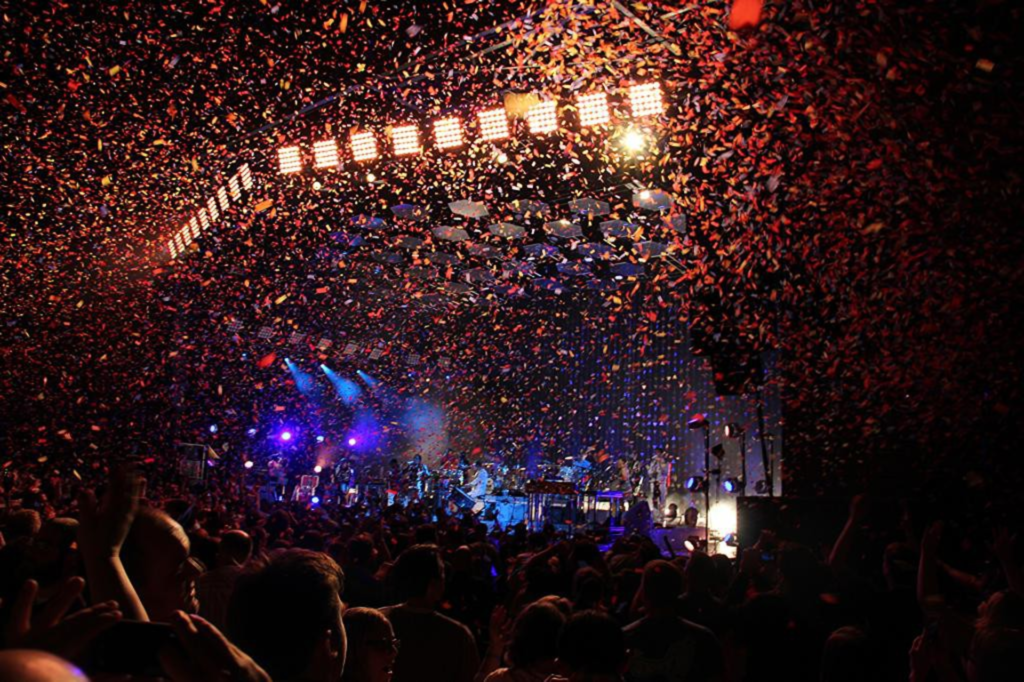 Dust in the Wind (Kansas)
Normal Person
Wake Up