Approach and Milkdrop on their upcoming Replay Records split single; release show this Saturday at the Replay 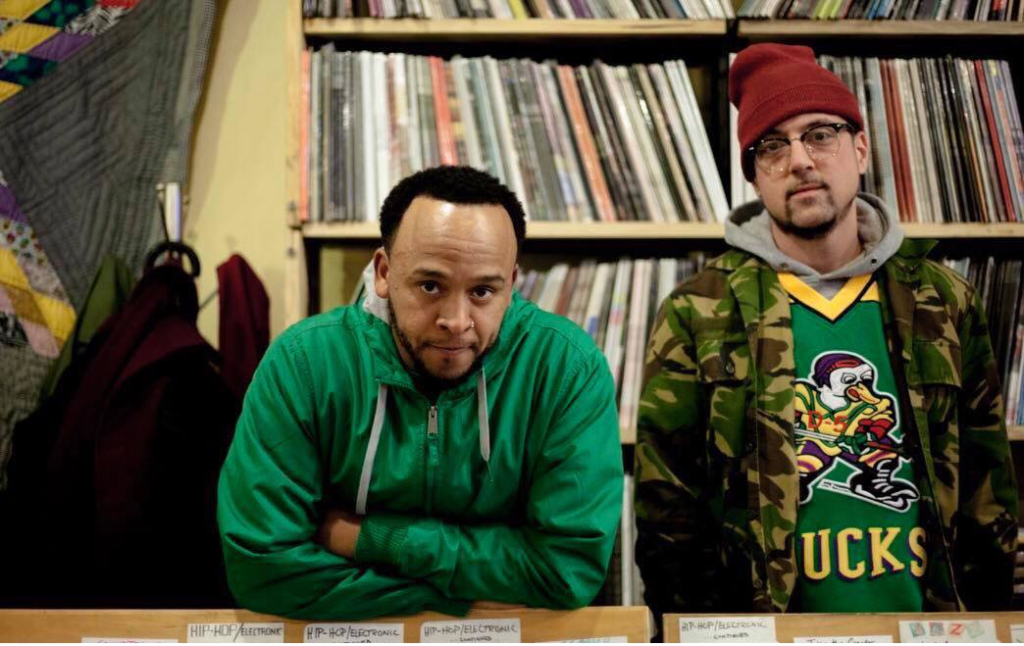 In November 2011, Lawrence’s Replay Records released its first piece of vinyl, the punk and garage-centric compilation LP, Cheap Beer. In the intervening years, the label — an arm of sorts of Lawrence institution the Replay Lounge — has issued thirteen 7-inch singles, a cassette, and one full-length album. Despite the fact that the bar is the college town’s hub for independent rap shows, though, it’s never released a hip hop single — until now.

The record is a split between longtime Lawrence stalwart Approach and Lincoln Marshall, the duo that features both Approach and Leavenworth rapper Milkdrop. Both cuts are dreamy, swirling slices of groove, and each features a guest MC. Approach’s track, “S.S. (What Up),” has bars from Canadian rapper Moka Only; Abstract Rude, of Abstract Tribe Unique, guests on Lincoln Marshall’s “Wrongs.”

When I reach out to Approach — his name’s Sean Hunt — he explains his deep affection for those “legendary” underground guests.

“Moka Only is my favorite living artist,” Hunt says. “The dude is brilliant. I have been a fan and a consumer of his music for about 20 years now. I connected with him via email and we have done about three songs up to this point.”

While Hunt’s been a fan of Abstract since his mid-’90s high school days — he was put onto the rapper’s tunes by his friend Brother of Moses — this is the first recorded collaboration between Approach and Abstract Rude (though Hunt did open for Abstract at the Replay back in May of 2015).

As for Approach’s other collaboration on the record — with Mlikdrop, aka John-Alan Suter — they’ve been working together since Hunt signed Suter to his Datura Records label in 2009. The pair teamed up for the 2015 album Poet At Heart album, and the idea for Lincoln Marshall came out of that album. “Now, we’re nearly four years into being a group together, creating and communicating with each other every day,” Suter says.

Adds Hunt: “Lincoln Marshall offers me vision outside of my own head. As a solo [artist], you’re locked into your own thoughts, tastes, and view of how your music is to be presented…The group dynamic has always been where I feel most comfortable. I am much better at getting the best out of others than I am working by myself.”

“In my solo work, it’s just me, by myself, throwing words at the wall, hoping they stick,” he says. “The level of comfort rises infinitely when you’re in a small room with someone who also shares the same energy and passion as you do.”

In his solo work, Suter has historically been more pensive and introspective with his songwriting — lots of jazz and bluesy boom-bap influences, very headphone-friendly. Lincoln Marshall has, he says, “a different energy, a different chemistry to the elements of it, and for obvious reasons has more fluidity and movement.”

They’re psyched to release the record through Replay Records. (It’s technically a co-release with Hunt’s Datura Records.) Hunt’s been involved with the bar for fifteen years now, including some stints as a doorman. Suter’s first “big-city” shows were in Lawrence.

“The Replay has become our proverbial home court in the last few years, so it makes perfect sense,” Suter says. “It’s an honor to be chosen as the first hip hop act that they release. [We] couldn’t be more grateful for the opportunity.”

The Approach and Lincoln Marshall vinyl release party is this Saturday, January 26, at the Replay Lounge, with Lincolm Marshall, Luiz Rip, Stitch81Classic, Cuee, and Les Izmore. Details on that show here.