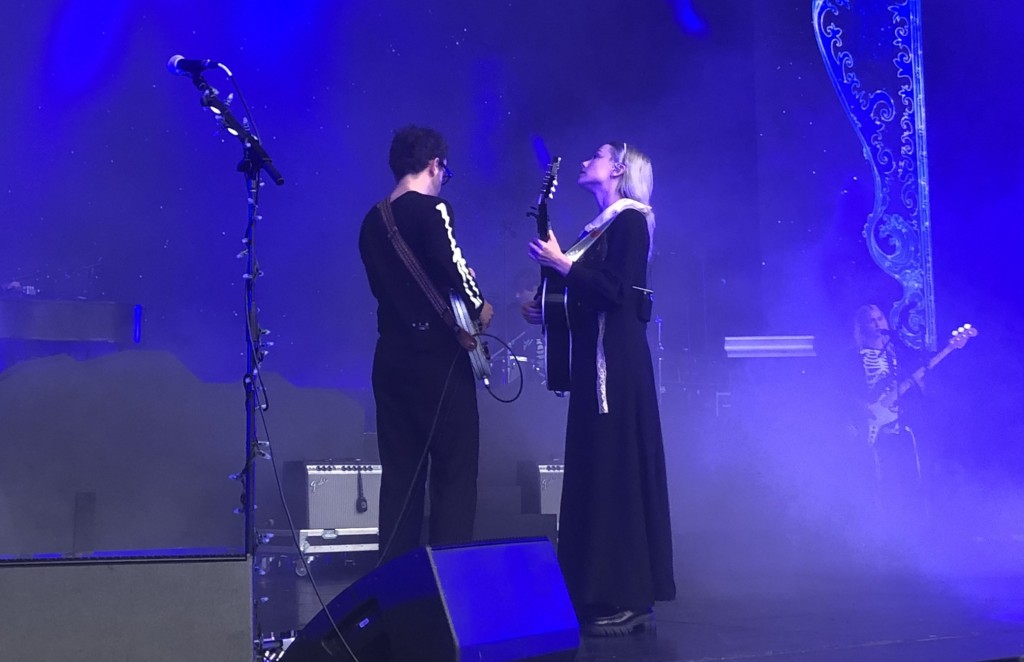 The crowd that turned out to see Phoebe Bridgers perform May 31, 2022 at Starlight had been through a rollercoaster of uncertainty all day, over whether or not the concert would be cancelled due to severe storms.

Starlight posted an update to Twitter: doors were to open at 6:45 p.m., with opener Charlie Hickey appearing on stage at 7:15 p.m. Showtime was originally scheduled for 8 p.m., and it was clear that not everyone got the memo about the time change. A steady stream trickled in for Hickey’s brief performance, but the rows were nowhere near full.

The merchandise line seemed to stretch for miles and Starlight’s numerous bars were popping, which meant that relatively few people were settled in their seats. Despite this and the other hiccups along the way, Hickey delivered an earnest performance of some of the songs on his debut album Nervous at Night. Similar to Bridgers, Hickey is evocative of Gen Z’s misplaced nostalgia and desperate clawing at any semblance of happiness.

Bridgers is an icon of the sad-pop genre, but you wouldn’t have known that many of her fans enjoyed her songs most while crying in their bedrooms by looking around the theatre. It was full of smiles, handmade signs, and themed outfits.

Bridgers emerged from backstage wearing a long black dress with a skeleton bodice and a Peter Pan collar trimmed with lace. She wore her hair down, pulled back with a headband, and she frequently tucked strands behind her ear in between tracks. The grin on her face didn’t match the tone of her lyrics, but it was welcome anyway.

Despite the sad girl vibes of her music, Bridgers appeared genuinely excited to perform.

The smoke machines and lighting didn’t create as captivating of an ambiance in the daylight as they would have later at night, but it turned out that Bridgers didn’t need to rely on them. The multicolored Christmas lights strung up on the stage’s microphones and the images projected on the backdrop were thoughtful touches that still couldn’t hold a candle to the energy of the performers.

As an attendee, you got the feeling that the crowd would have shown up to watch Bridgers perform acoustic-only songs in the rain. They would have watched her sing on a stage devoid of any decoration or special effects. They did brave a potential thunderstorm for her.

Bridgers’s charisma as a performer doesn’t come from being coolly collected and untouchable. She’s awkward. From listening to her music, you would get the impression that she’s moody and ethereal, but while she attempts to pull that off by pressing a hand to her chest, clutching the skirt of her dress, swaying, and bending over at the waist to drag her words from her chest, it still comes off as unpolished and authentically uncomfortable.

This is what fans love about her.

Bridgers doesn’t try to erase the contradictions of herself as an artist. She’s relatable because she sometimes appears like she’s about to jump out of her own skin. When she dances around the stage, it’s like she doesn’t know what else to do, but it’s clear she’s having fun.

Throughout the performance, she interacted with fans by reading their signs and responding. She read one that read, “My boss thinks I’m sick.” Bridgers responded, “Maybe you are sick. Sick in the head,” and then flashed the shaka sign.

During “Smoke Signals,” the crowd screamed, “Fuck the cops!” alongside her. When she says, “Kansas City is cool,” the crowd replied with a resounding… “Yeah!” Unexpected!

Bridgers also took a moment to get serious with her audience.

“We’ve been going a lot of places on this tour and I think I’m spoiled with a very preaching to the choir audience, like my friends and my literal audience, when I talk about abortion and gay rights and stuff,” Bridgers says.

“I think if you’re considering not talking about something that matters to you, maybe consider talking about it. Sometimes I feel like it’s just a bunch of people who agree with me, and it’s really not. It also hurts my feelings when people get a bad track record for being like an angry feminist or whatever, but no. Every time I piss somebody off it hurts my feelings.”

Later, she asked, “Does anyone here disagree with their parents about laws or guns or politics?”

You’ve got to hand it to her. She knows her demographic.

As daylight faded, attendees started to get an idea of what the ambiance of Bridger at Starlight might have been like. The pop-up storybooks in the background, each matched to reflect a different song. The smoke filtered in behind her. One half of her face bathed in blue light while the other half was an almost golden shade of orange.

At one point, the smoke and lighting hit just right, so she almost disappeared beneath it. She was featureless beneath the shadows, but the spotlight lit up her silver hair like a halo. The first droplets of rain began to fall, but the storm held off until she finished.

The pseudo-finale of “I Know the End” was deafening. The storybook pages caught fire on screen and audience members screamed at the top of their lungs for more than a minute, continuing even after Bridgers headed off stage.

She returned solo for one more song: “Waiting Room.”

As she neared the end of her set, lightning flashed quietly overhead.

But even the thunder waited for Phoebe Bridgers.