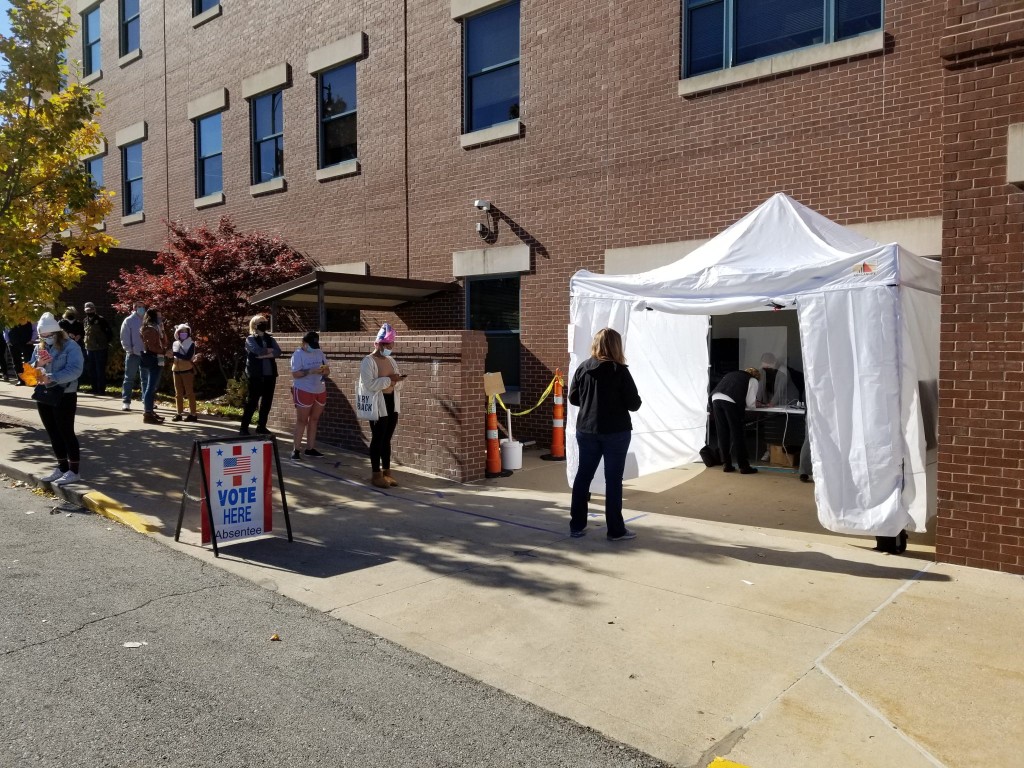 Candidates for U.S. Senate and PACs backing them have combined to spend almost $30 million in advance of the Aug. 2 primary. // Rudi Keller of The Missouri Independent

The biggest spender in the Missouri Senate race is a political action committee that won’t disclose its donors until Wednesday.

Show Me Values PAC, which is running ads opposing former Gov. Eric Greitens, was formed June 2 and told the Federal Elections Commission it intends to file monthly reports. Every candidate and other outside groups participating in the race reported detailed data on donors and spending on Friday.

In daily reports showing its spending activity, however, Show Me Values has told the FEC it has spent almost $3.9 million. A review of television ad spending by The Independent shows the PAC has spent $3.5 million of that amount on broadcast ads accusing Greitens of being soft on China and highlighting recent allegations of spousal and child abuse by his ex-wife.

The ads are running in every media market in the state.

When the PAC began running ads in June, Politico reported that it is funded by donors backing Attorney General Eric Schmitt. In a statement, Greitens campaign manager Dylan Johnson said “swamp creatures and grifters” are behind the PAC.

The top six Republicans and top three Democratic candidates in the primary — there are 21 Republicans and 11 Democrats overall — have combined to spend more than $15 million. Spending by eight PACs — including one supporting independent candidate John Wood — is nearing $15 million.

Television ad spending, which stood at just under $10 million in the first week of July, now totals $14.7 million.

Here’s what reports to the FEC and the Federal Communications Commission show about the spending by those candidates and committees:

Democratic candidate Lucas Kunce has raised the most for his principal campaign committee of any candidate, $4.4 million, but has one of the smallest television buys of any candidate on the air. In addition to $234,000 on television, Kunce has spent $264,000 on digital advertising and $275,000 on direct mail. Kunce has spent $3.6 million total and had $870,000 on hand on June 30.U.S. Rep. Vicky Hartzler has spent the most of any Republican candidate, and with $3.4 million in contributions is very close to Schmitt in total fundraising for the campaign. Hartzler has spent $2.6 million, including $1.4 million for TV ads, and had $1.5 million left on June 30. A PAC called Secure Our Freedom is backing Hartzler with a $90,000 television buy and $420,000 in total spending.Schmitt has raised $3.6 million for his campaign but used only $542,000 for television ads, all in the St. Louis market where he is best known. He has spent $2.1 million total, and his expenses during the second quarter of the year include $10,947 for a campaign event June 9 at Grant’s Farm, the St. Louis tourist attraction that is also the home of Democratic candidate Trudy Busch Valentine. A PAC supporting Schmitt, Save Missouri Values, has spent almost $3 million on television ads statewide.Valentine, a member of the wealthy family that once owned Anheuser-Busch, has given her own campaign $2 million and used it to support a $1.4 million television campaign with ads running in the St. Louis, Kansas City and Columbia markets.State Senate President Pro Tem Dave Schatz has also put $2 million into his own campaign, spending $965,094 so far that includes a $693,000 television ad campaign. One of his biggest expenses in the past three months was $40,000 for a poll to guide his messaging.Greitens, who has raised $2.2 million, has spent $1.8 million but not purchased any time on broadcast television. A large portion of his spending is for payroll and fundraising fees and commissions. Two PACs, Team PAC and Missouri First Action, have spent a combined $2.2 million promoting Greitens.U.S. Rep. Billy Long has raised about $2.1 million and spent $1.6 million but he, like Greitens, has not purchased any broadcast television ads with campaign funds. A PAC, WinMo, purchased $156,7000 worth of commercials promoting Long in May but has not spent any since.Two candidates, Democratic candidate Spencer Toder and Republican Mark McCloskey, have not purchased any air time and have no PACs backing their campaigns. Toder has raised $1 million, most of it loans to his campaign, and spent $504,735. McCloskey has also raised $1 million, and spent most of it, leaving him $35,966 on June 30.Missouri Stands United is the PAC created by Jack Danforth to promote Wood’s campaign. Danforth contributed $5 million when it was created, and it has spent $1.5 million on television time.

While the Senate race is the most visible, there’s also a primary for state auditor in the Republican Party, as well as three congressional primaries that are seeing significant spending.

With Democratic incumbent Nicole Galloway not seeking a new term as auditor, the job is open for the first time since 2006.

The GOP contest pits Scott Fitzpatrick, state treasurer since 2019, against state Rep. David Gregory, a St. Louis trial attorney in his third term as a lawmaker.

Reports filed Friday with the Missouri Ethics Commission show Fitzpatrick with a lead in total fundraising, $657,000 to $525,000, and with a substantial advantage in funds going into the final month of the campaign.

Fitzpatrick has spent the most on television, $371,000, targeting the St. Louis, Kansas City and southwest Missouri markets. He recently added ads in Cape Girardeau in southeast Missouri. Gregory opened his ad campaign in those markets, plus central Missouri. But he has not spent any of the $238,000 on television in the Joplin market, which is Fitzpatrick’s home area.

The winner will face Alan Green of Florissant, the only Democrat who filed, and John A. Hartwig Jr. of St. Louis, the Libertarian candidate.

Total spending in the congressional primaries is $4.5 million, with more than one-third by 1st District Democratic incumbent Rep. Cori Bush. In the past three months, Bush has spent $317,000, including $74,266 on security services and $79,000 on television ads.

The other two congressional contests are Republican primaries for the 4th and 7th districts, currently represented by Hartzler and Long, respectively.

The 4th District GOP race has seven total candidates and five who have purchased television ads. Where the candidates are buying their ads shows the impact of this year’s redistricting process, which split Boone County between the 3rd and 4th districts.

No candidate has purchased broadcast television ads in Columbia, deciding that it isn’t worth the cost for the small number of district voters that can be reached.

The biggest television ad campaign in the race is from former Kansas City news anchor Mark Alford, who has spent $133,000 and recently canceled many of his ads in the Kansas City market, instead purchasing time in Springfield. Alford’s campaign has raised $583,000 and he had $347,000 on hand June 30.

State Sen. Rick Brattin of Harrisonville has spent almost $46,000 on television ads in Springfield and during the second quarter repaid a loan to the campaign of $30,000. Brattin, who was criticized last week by opponents for sending out 76,000 pieces of official mail that resembled campaign literature, reported spending $14,426 for a mail piece to the district.

The fifth candidate on the air in the Springfield area is former Lee’s Summit police officer Bill Irwin. He’s put $31,605 into the television campaign and $28,789 on direct mail.

The winner will face Jack Truman of Lamar, the only Democrat filed, and Randy Langkraehr of Warrensburg, running on the Libertarian ticket.

In the 7th District, former state Sen. Jay Wasson of Nixa has raised and spent the most. His campaign has raised just over $1 million, spent about $475,000 and had $561,000 on hand as of June 30. His television buy is almost double that of state Sen. Eric Burlison of Battlefield, who has raised $636,000 for the campaign and invested $189,798 in television ads.

Candidates Paul Walker of Springfield and Alex Bryant of Nixa have also spent money on television. Walker spent $18,000 in April and none since, and did not file his finance report due July 15. Bryant has spent $40,755 on television ads, but has raised less than $100,000 and had $61,000 on hand.

Two other candidates, state Sen. Mike Moon of Ash Grove and Sam Alexander of Fair Play, have both raised more than $100,000 but have not spent money on television. Moon, who had $24,000 left on June 30, has focused his campaign on digital ads. Alexander, who had $47,000, is spending his funds on campaign signs, literature and online efforts.