Anson DeOrnery, handler of art most of us will never see 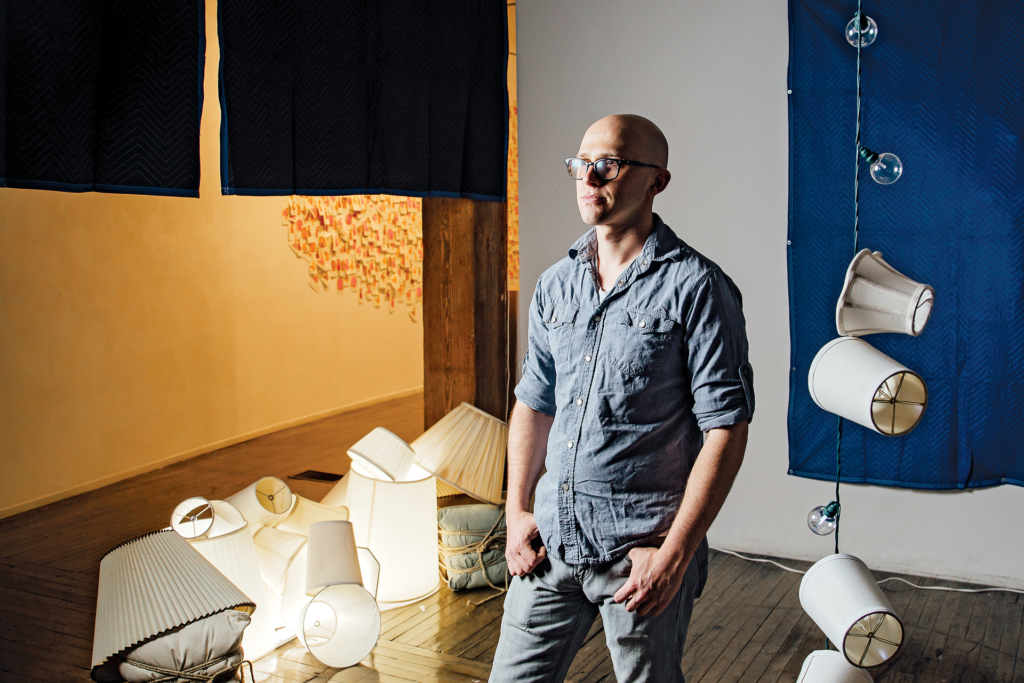 A couple of years ago, Anson DeOrnery moved a Willem de Kooning painting out of a house in Omaha. It was hanging in a dimly lighted den — it had been there for years — but had recently sold at auction for $32 million.

“It didn’t look that impressive when I first saw it,” DeOrnery says. “But the room where we moved it to pack it up had a big glass ceiling that brought in all this light, and that’s when it really jeweled. It was an amazing, beautiful painting. But then I had to wrap it in plastic, put it in a crate, seal the crate and send it off to some private collector in London. I think about that a lot, how I’m probably one of the few people who will ever see that painting.”

They’re not all masterpieces, but DeOrnery regularly gets to breathe in great works of art, if only for a few short minutes, as part of his profession. He runs an art-handling business, DeOrnery Fine Art Services, and was previously employed by ARTworks of Kansas City, which is in the same line. He crates art, hangs art, transports art, installs art. Sometimes he’s hanging art in the lobby of a prestigious local law firm. Sometimes he’s moving art into a climate-controlled storage room in a Mission Hills mansion. The experience has given him a particular vantage point — an insight into the back end of the art world in Kansas City.

“Until I got into this industry, I didn’t really understand the economics or the motives behind a lot of the art market,” DeOrnery says. “Some of the biggest collectors in town, you go over to their house and they’ve got incredible art just sitting on the floor or crated up in their basement. It’s not even a status symbol at that point — it’s just purely an investment.”

The idea that much great art goes unseen outside private collections informs Shades, a solo exhibition DeOrnery put on in June at the Kansas City Artists Coalition, in the City Market. For the show, lighting in the space is kept low, and an audio recording of a preposterously fast-talking cattle auctioneer provides the soundtrack: DoIseefivehundredIsefivehundredDoIseesixhundredThere’ssixhundred?

On the walls are blue packing blankets of the kind DeOrnery uses on the job. The fabric is nailed tightly to the wall, obscuring objects that may or may not be art. You’re encouraged to touch the objects and wonder what lies under the blanket. Only DeOrnery knows. As he asks in his artist’s statement for the exhibition: “Is it a thrift-store velvet painting of Elvis or a Monet? Could it be a common flower pot or Ming vase?”

DeOrnery, who has a shiny, shaved head and wears black-rimmed glasses and is generally mischievous-seeming, is a frequent pointer-outer of social and economic forces that push art deeper into the realm of commodity. Earlier this year, he staged a “show” at the Inside Outsider Gallery, in downtown Frankfort, Kansas, two and a half hours from Kansas City. Online, DeOrnery posted to his various social-media pages photos of the show, which featured boxed crates hung on walls beside framed copyright certifications. But the show wasn’t actually put up at the Inside Outsider Gallery, says Andrew Schell, who runs the space.

“He asked me if he could use the name of my gallery to promote his show, and of course I was game for that,” Schell, who is also an art handler by profession, says. “My understanding is that he took those pictures in some other space when he was deinstalling a show, though I’m not even sure if that’s true.”

The conceit was that DeOrnery was selling only the copyright to several of his own paintings. In this perverse scenario, the buyer would own the copyright for a piece of art but not the actual artwork. In fact, the buyer would never be allowed to see the artwork, and would therefore be unable to confirm its existence. Only after DeOrnery’s death could the work be viewed.

“I’m a lawyer’s son, and I love copyright law,” DeOrnery says. “Artists almost always retain the copyright to their work, even when other people buy it and sell it. I thought it would be interesting to try to get people to invest in my art, sight unseen, like a total bet. It would be worth it if I turned out to be Damien Hirst or Kara Walker or Jeff Koons or whoever. But otherwise it’s just a ridiculous waste of money.”

He adds: “Although my father told me later that the copyrights may be invalid unless there’s an image of the artwork.” He shrugs.

On July 28, DeOrnery will open a new installation at the Lawrence Art Center, called Deluge. It’s a commentary, he says, on “social media as a fantasy.” Meanwhile, until DeOrnery’s copyrights reach Koons status, he’s still hustling, working his art-handling day job. Lately, though, he’s thinking it might be good to diversify DeOrnery Fine Art Services.

“I want to buy a space and get into the art-storage business,” he says. “That’s where the real money’s at.”

Jan 18 all-day Sprint Center
This. Is. Monster Jam! The most action-packed motorsports experience for families in the world today returns to Kansas City for another high-octane weekend featuring the ultimate mix of high-flying action and four-wheel excitement with the Monster Jam Triple Threat Series®, featuring six different racing, freestyle and skill competitions on three different Monster Jam vehicles at Sprint Center from Jan. 17-19,...
Tickets
I AM CRAFT BEER

Jan 18 @ 6:00 pm – 9:00 pm Rochester Brewing and Roasting Co.
Everyone deserves a seat at the table. Join us for a great night of beer (or coffee) and conversation discussing diversity and inclusion in our craft beer community. The ‘I am craft beer’ movement began in September 2019 after a prominent woman in the craft beer industry, Chalonda White (aka Afro Beer Chick) received revolting hate mail. Dr. J Jackson-Beckham,...
Tickets
Atmosphere