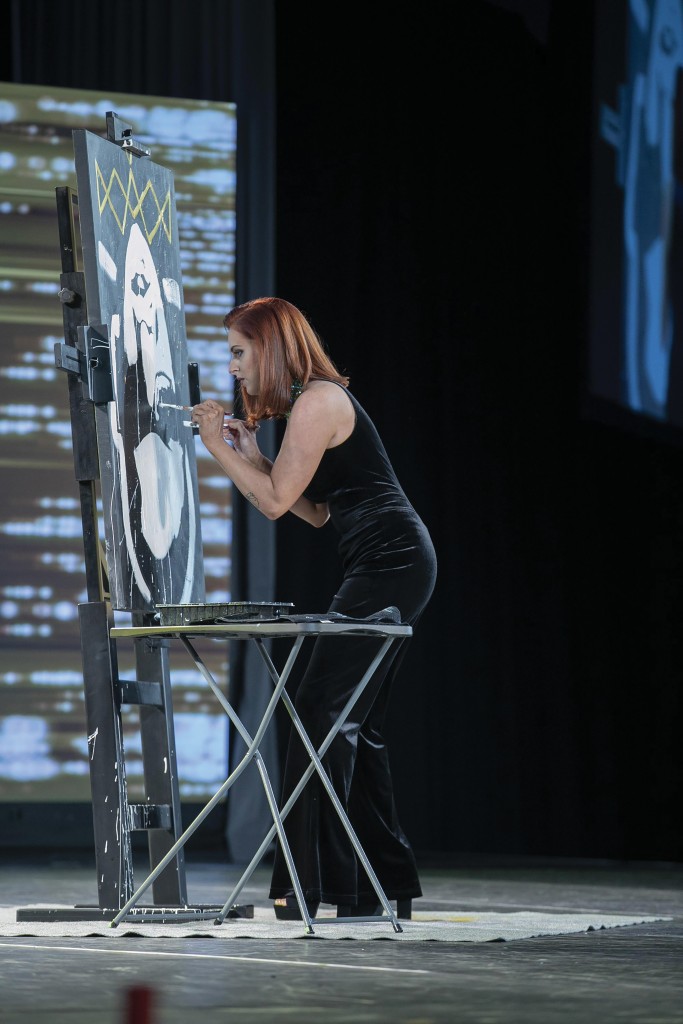 It’s mid-November 2020, two months after Justice Ruth Bader Ginsburg’s death. Miss Kansas’s voice comes over the phone from her home in Wichita. It seems that she hasn’t veered into the occult, she’s simply spent a lot of time painting one particular portrait of the justice over and over.

In fact, she performed speed painting RBG as her talent in the Miss America competition in 2019—note: the organization no longer uses the word “pageant.”

“For the Miss America competition,” Wooton says, “I had three canvases that I, for practice runs, would paint over and over. So, there’s probably 20 versions of RBG beneath RBG. I would paint three in a practice session, I would wait for them to dry, then I would paint it black and I’d do it again.”

And now, what became the final version is sitting in Wooton’s home, where she moved from Lawrence after being crowned Miss Kansas a year and a half ago. Wichita is the unofficial HQ of the Miss Kansas competition and works well as a central location for all the travel required of the winner.

Before the pandemic, Wooton had been on track to make 400 appearances in the full time position that is Miss Kansas. Now, she mostly executes speaking engagements through Zoom. 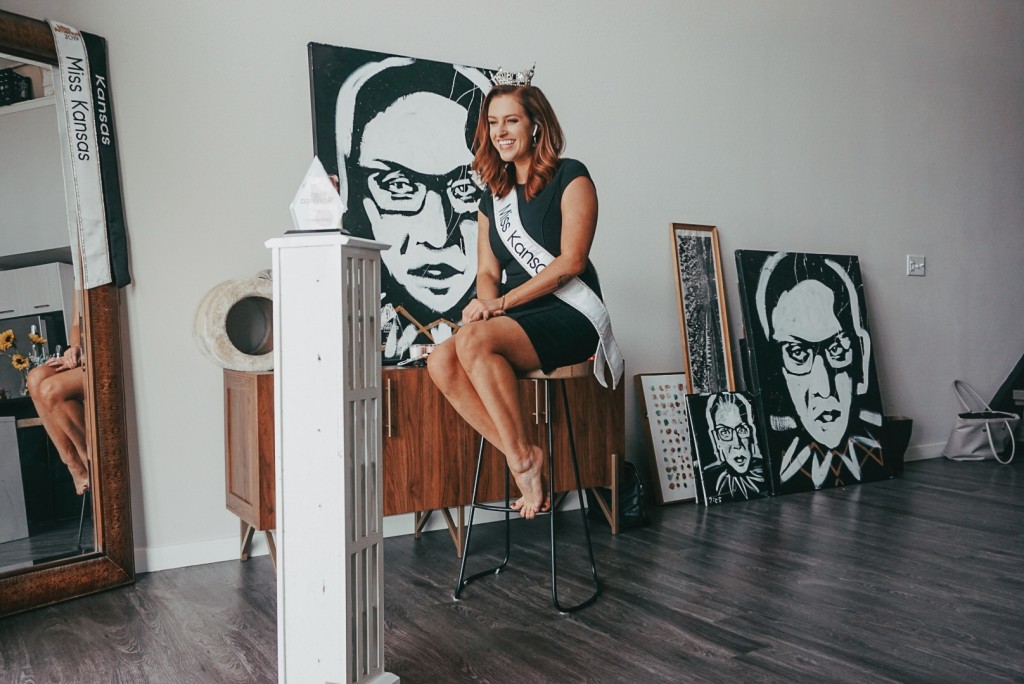 Wooton speaks to a group about the Miss America talent selection and process on Zoom from her home. // Photo courtesy of Annika Wooton

But what’s just as wild as having RBG in her living room is a pandemic bonus that absolutely no one else in Kansas received: an extra year to wear a crown. The 26-year-old Overland Park native expected to hand over the silver tiara to another young woman in the spring, but the Miss America Organization extended her reign after cancelling the 2020 competition.

She competed for that crown for six years before she won on her seventh try—the year the organization raised the age limit from 24 to 25.

“My last year was also my bonus year, and then I got another bonus year thanks to the pandemic,” Wooton says.

Pageants famously include segments like the interview, the now-defunct “swimsuit competition,” and the talent show. Wooton says that choosing and executing the talent portion is the only part that’s completely in the control of the contestant 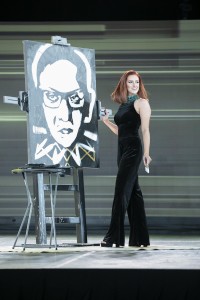 For four years, Wooton competed as a singer. In fact, the year she took the state crown, she sang a mashup of “Let Me Be Your Star” and “Don’t Forget Me” from the NBC show Smash. The other three years she speed-painted.

Each woman who holds the state title competes in the Miss America competition as well, so Wooton had the opportunity to change up her talent.

After no deliberation at all, she decided to make a return to speed painting when she had the national platform.

Speed painting is still an unusual talent in the world of beauty pageants, but a four-year-old New York Magazine article Wooton appeared in suggests it’s gaining in popularity. The most well-worn talents are singing, dancing, and playing an instrument, often a piano.

In 2019, when Wooton competed on the Miss America stage, she wasn’t alone in performing speed painting as her talent. Joanna Wicks, Miss Delaware, also tried her hand at it. However, Wooton says, “I believe I am the first speed painter to place in the Top 15 and to also win a talent award.” 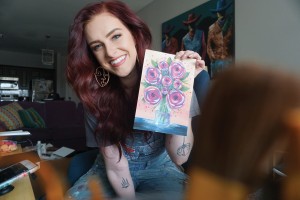 Woonton holds up her artwork. // Photo courtesy of Anika Woonton

The activity is unlike regular painting in several ways other than taking place in a short amount of time. Wooton paints at different speeds depending on the event. Ninety seconds is the quickest, but then there’s medium speed, which is around seven minutes for a demo, and then a longer performance of up to 60 minutes for a pre-COVID cocktail hour.

Wooton, who’s a leftie, paints double-handed, especially during those speed rounds. She laughs and says, “I’ve got two hands and 90 seconds, we’re going to use everything we’ve got.”

Her right hand does the crude work of paint application, sometimes in big globs just to get it on the canvas, then her left hand forms the lines and curves of the painting’s subject. The two-handed approach wows like a magic trick.

Wooton uses a special spinning easel. Once she’s completed the painting, she rotates what appears to be an abstract jumble of shapes to reveal a scene like The Wizard of Oz’s emerald castle surrounded by its field of red poppies.

Other times, that flip reveals a face, as it did when she painted Ginsburg.

Wooton chose to paint Ginsburg because it’s her view that the woman embodied the Miss America Organization’s mission statement: To prepare great women for the world, and to prepare the world for great women.

“I get goosebumps every time I say it,” Wooton says.

Miss Kansas cites Ginsburg’s work for LGBTQ+ rights, women’s rights, and human rights as inspiration for her decision to make her the subject of a painting.

“We’re also showing that we’re so much more than what we look like, and we’re more than our gender, and she did the same thing, opened doors for people as well,” Wooton says.

And she didn’t just appropriate Ginsburg’s image; that would not have been genteel. She asked and received permission from the woman herself.

Wooton drew a sort of mini comic book of her game plan and mailed it to the Supreme Court. Within days, Wooton received an email from a Supreme Court address telling her the justice had approved.

A beauty queen isn’t about to perform in dead silence, so each painting has an accompanying soundtrack. With a small team, Wooton created a special one for Ginsburg she hoped would reflect the values of the Miss America Organization and RBG as well.

She teamed up with a teacher from the high school she attended in Virginia—Miss Kansas was born in Overland Park and earned a degree from KU, but most of her schooling took place in the southeast—and Kansas City writer Emily Wilkinson to write a spoken word poem largely comprised of Ginsburg quotations. A composer in the Netherlands wrote the music, and 17 women Wooton knew in Virginia recited the poem.

Wooton did not win that competition, but something happened that she says was just as good or better: Ginsburg’s trainer saw a photo of the preliminary competition and messaged Wooton to ask for a video.

She sets the scene: “It was the night before the final competition. My roommate was Miss Oklahoma, and she was on the phone with her parents, and I was sitting there browsing social media.”

That’s when Wooton received a message from RBG’s trainer. He said he’d shown the justice the video. Like most audience members, Ginsburg couldn’t understand what Wooton was painting at first. “He said, ‘just wait,’ and then when I flipped it at the end she said, ‘Oh my gosh, how did she do that?’ I immediately started crying.” 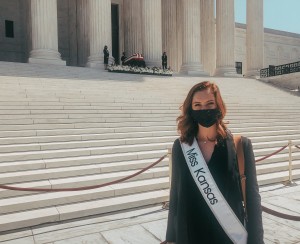 In September, Wooton travelled to Washington, D.C. and stood at the bottom of the Supreme Court’s steps to pay tribute to Ginsburg, which she counts as among the most memorable moments of her life.

For the most part, she donates or auctions her paintings, but she thinks she’ll hang onto the one sitting in her living room.