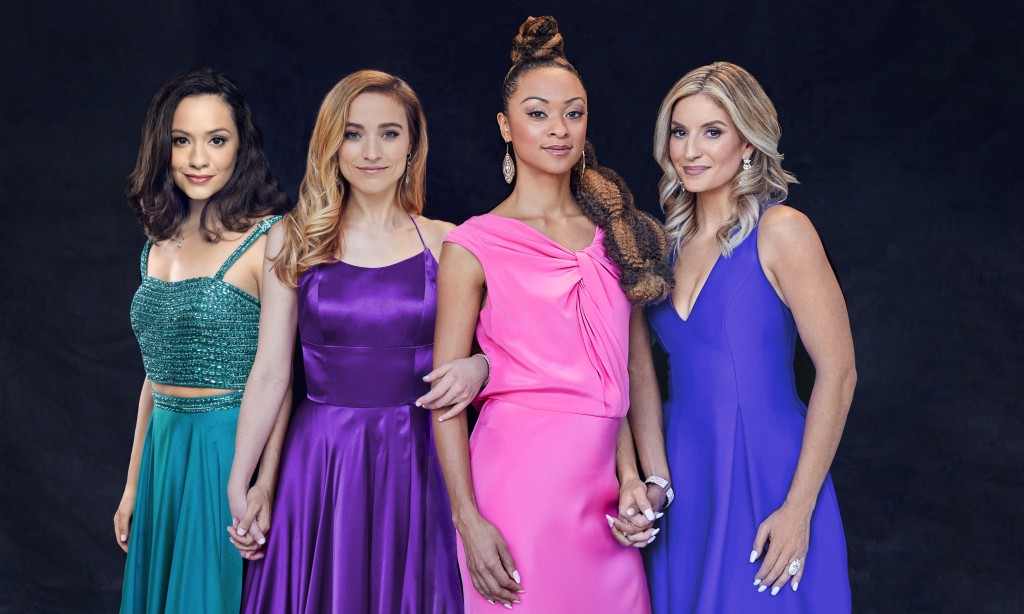 To those of a certain age, singer and actress Anneliese van der Pol is a familiar face, having starred Chelsea Daniels on Disney’s That’s So Raven and its spin-off, Raven’s Home, off and on for nearly 20 years. In addition to her television work, van der Pol is a stage actress and singer notable for being the final actress to perform the role of Belle in the Broadway adaptation of Beauty and the Beast, to say nothing of myriad singing appearances on various Disney specials and releases over the coruse of her career.

However, getting to hear van der Pol sing on a DVD special is one thing. Getting to see her in person used to require a trip to New York City, but this weekend, she’s coming to our city. On Sunday, December 4, van der Pol–along with fellow stars Christy Altomare (Broadway’s original Anya in Anastasia), Isabelle McCalla (Broadway’s Jasmine in Aladdin), and Syndee Winters (Broadway’s Nala in The Lion King)–come to the Midland as part of Disney Princess: The Concert, a touring show featuring “actresses who portrayed the princess roles on Broadway performing the beloved music of Disney’s Princesses.”

We took the opportunity to engage our theater and soundtrack nerdery into one interview with Anneliese van der Pol, when we spoke with her by phone ahead of the show’s stop this weekend.

The Pitch: Given that you’ve spent the last two decades of your life in and out of various Disney productions, did you grow up a fan of Disney princesses yourself?

Anneliese van der Pol: Yeah, I guess so. That’s so interesting. I mean, I’ve been part of the Disney family in some capacity–part of Disney theater and part of Disney TV and even Disney film–but growing up, and maybe I shouldn’t say this, I didn’t have the Disney Channel. My mother was kind of more PBS, and NPR, but I think every little girl, whether it’s Princess Di or Princess Aurora, wants to be a princess. And yes, I did grow up, of course, with Little Mermaid, with Ariel, and with Belle from Beauty and the Beast and always wanted to, to be a princess in some way. I didn’t know it would come into fruition like it has, where I’m literally, actually a princess. It’s been great, being part of this family as Chelsea Daniels and now a princess, for sure.

You’ve gotten to do some iconic Disney songs for various Disney DVDs and things like that, but what’s the difference between stepping into a studio and tackling this and stepping out on stage?

It’s always different when you’re in a recording studio or recording even something for live television. It’s much different than live theater–and musical theater, specifically–whether it’s Broadway or whether we’re where we are today in Redmond, Virginia. I feel more settled here. I feel more suited on stage. I love the classics. I love Judy Garland and Barbara Streisand. I love the singers, the loud singers, and I feel the most sort of free and, and alive doing live theater like we are every night.

I feel like I get to use all facets of my voice. But when I was doing recordings like “Over It” or “Alone in the Hallways” or those things for Disney Channel, that was sort of more pop singing, and that’s even before Disney Channel knew that they had singers on their plate, before Hannah Montana, before High School Musical, before all of the recordings, before Selena Gomez and Demi Lovato and all of them.

They were sort of just figuring it out back when I was doing that kind of music and I never really saw myself as a pop singer or recording artist. I always saw myself as a on stage theater singer. Long story long, the older I get, the more grounded and the more at home I feel as far as my facet in the Disney family.

Given that you are on tour with other women who have performed in these roles on Broadway, but in different times and different shows, what sort of stories and experiences do you have to share while you’re getting ready backstage?

Oh, I love these questions. I wish I could think of something very specific, but that’s exactly what we’re doing–we’re swapping stories, some good, some bad; bonding of our time on stage. Christy tells us stories about Anastasia and the coolest thing is, she not only tells us backstage, but she’s telling people onstage. She’s giving the audiences a behind-the-scenes look of her time on Broadway, as well as Syndee Winters and Isabelle McCalla.

It’s crazy because we’re all around the ages of 20s and 30s and so we’re sort of growing up together and missing the loves of our life at home and talking about that, sharing an RV together–sleeping on an RV but sharing a lot of dressing rooms together. It’s really a wonderful bonding experience and really woman-forward, feminine-forward and I think that translates on stage as well.

It’s sort of our goal as princesses to represent courage and kindness and not just the look of it all. I think I’m passing your question a little bit, but yeah, I mean, I’m sharing a lot of stories about Raven and Raven’s Home and That’s So Raven and the things we’ve learned, the things we wish we could change, the regrets–all of that stuff. And, just how much theater has changed, how much Broadway has changed in New York–for the better, luckily. But yeah, there’s lots of stories, lots of gossip.

When you are getting ready backstage, does putting on dress help you get into the proper mindset?

For sure. For sure. Not only putting on the dress, but putting on the glitter that sparkles, the Pandora jewelry–it does, and you know we have a lot of Q&A’s and talkbacks where we have little girls all dressed up as princesses and they ask us questions like, “What’s it like to be a princess? Do you have a carriage? Are you married to a prince?” And, you know, it’s, it’s interesting. It’s like, “Gosh, do these little girls really think I’m Meghan Markle or is it because I’m wearing a tiara?”

We try to sort of come forward, in the sense that we are actors and I am Anneliese van der Pol who is an actress who got to play a princess on Broadway, but that the princess really lies within us all, as in the matter of if you are a kind person, if you’re giving back, if you are helping people and society and being of service, then you, in your own way, can be a princess, because that’s what all of these princesses do, right?

They’re struggling and they want another life. Ariel wants to get out of the water and Belle saves the beast and turns him into a prince again. But it’s not that they’re wearing pretty dresses or anything. But yes, it helps. We do have a fabulous first act outfit, and then we really step it up.

Second act, we put on our Pandora jewelry and I literally have a glitter bar that I rub on my arms and shoulders just to get really nice and sparkly. We put on tiaras and of course it helps you feel like a princess. But then at the end of the day, when the show’s over, we take it off and get in our PJs and have a slumber party.

You have been in so many musicals over the course of your career, and you’ve gotten to sing some really fantastic songs. Is there a role to which you still aspire?

Disney Princess: The Concert comes to the Midland on Sunday, December 4. Details on that show here.