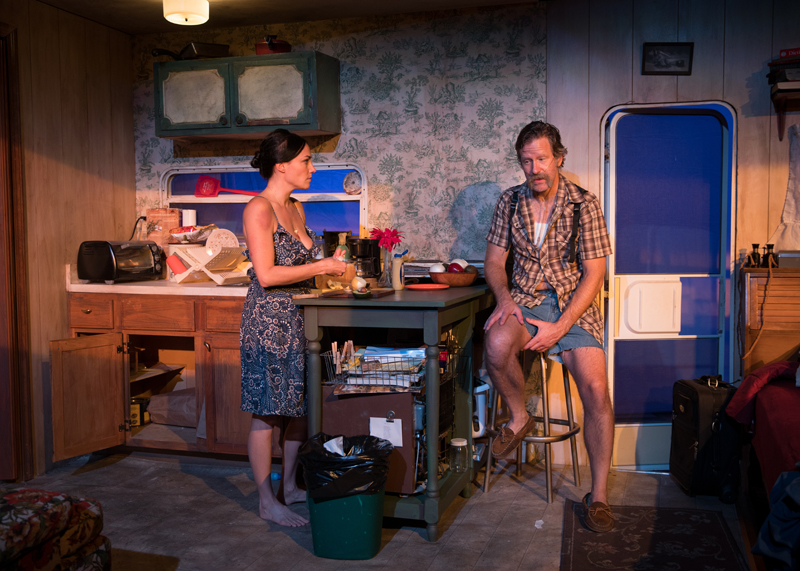 Annapurna puts two people in a tiny trailer in the mountains, but Sharr White’s 80-minute one-act — which debuted off-Broadway in 2014 — affords us a panoramic view into the relationship of one estranged couple.

It zooms in on them as well. When director Rusty Sneary called this an “intimate” show as he requested silent cellphones, he may have meant more than the closeness of the small Living Room Theatre space. The two characters onstage before us, Ulysses (Charles Fugate) and Emma (Vanessa Severo), do maintain a reciprocal distance, for a bit, but they ultimately don’t hold back on each other — or on us.

The actors wholly embody their roles, and their performances here comprise the raison d’être of White’s play, which explores the nuances and vagaries of a romantic bond. The script, despite some cliché and mildly predictable components, explores — in an ever-descending mountain-road way — their long-ago marriage and what has driven them apart. It’s a trek that is, at times, funny, tender, moving and raw. And, under Sneary’s focused direction, the journey with them feels honest and immediate.

Emma and Ulysses face off from the play’s first moments, when Emma bursts into Ulysses’ small, messy — filthy, she says — trailer. She has brought luggage to the mountains, way too much of it from Ulysses’ point of view. They haven’t seen each other in 20 years, after she disappeared one night with their 5-year-old son. Now she finds Ulysses, a former professor and prominent poet, cooking sausages from the Dollar Store while wearing no more than an apron. He’s saving money on laundry, he says; he’s a “practicalist.” But he wears a backpack, too, to carry the oxygen he needs to breathe.

The mountains are no place for an advanced case of emphysema, but perhaps the playwright’s premise is Ulysses’ self-destructiveness. The former alcoholic and chronic smoker had lost his teaching post and his family. Now he seems at peace with the end of his life. “One thing leads to another,” he says of his present state.

Mountains metaphorically loom large here, not so much for their size as for the tests and challenges they pose. Ulysses doesn’t know why Emma left him so long ago, and she doesn’t immediately explain her sudden appearance. His letters to his son over the years — communication that went unanswered — may play a part. “Just passing through,” she says at the start, but he doesn’t buy it, and neither do we. And so she settles in and cleans up, domesticating both the place and the poet, as the story delves into the why in a way that loosens their rock-solid stances as it also holds us mountain-climbing close.

Severo appears easy in Emma’s skin. Conveying a woman both steadfast and wavering, her fluid portrayal enunciates the former partner and lover as well as the person who fled. And as Ulysses, Fugate balances physical weakness and weariness with a gruff self-sufficiency as he also emits outrage, bewilderment, self-loathing and underlying love. Why were things so impossible? they wonder, as they also appraise the damage done.

Nicole Jaja’s lighting design reflects a blue-cast mountain sky outside the trailer and grounds the story in the day’s progression from morning to evening (and produces a real-time sense of minutes passing with a strobelike effect in early scene transitions). In his set design, Timothy Rothwell accomplishes the outlines of a trailer’s exterior as well as its interior makeup. And David Kiehl’s sound realistically depicts the dog in the yard and the trailer’s working shower.

“Just because you leave someone doesn’t mean you’re not in a relationship. With them, somehow, for the rest of your life,” Emma says. And so, though the playwright holds off on final (and ultimately anticlimactic) reveals, the ripple effect of this play’s central bond opens up a vista for reflection — on the inner workings of one relationship, and those at play in bonds of our own.