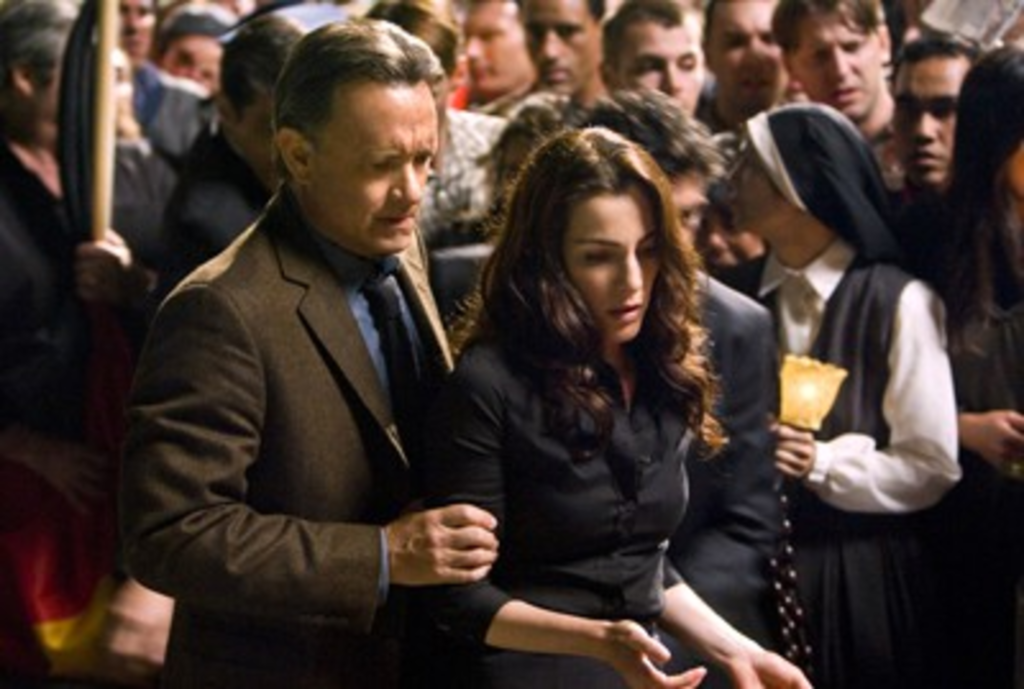 At the tail end of The Da Vinci Code, having traipsed around scenic Paris and London for over two hours to find out whether the Holy Grail was just an old cup or the womanly seed of Jesus and Mary Magdalene, Tom Hanks’ Robert Langdon, ace symbologist, sloped off back to Harvard, though not before wishing the womanly seed (a wan Audrey Tautou) “Godspeed” — a strange farewell coming from an avowed agnostic, but excellent advice for part deux of the Dan Brown franchise, which has roughly the same amount of God but a lot more speed than its predecessor.

Angels & Demons is still no more than another treat for whacked-out male-conspiracy theorists, mind you, and at 138 minutes, it’s a scant 10 minutes shorter than The Da Vinci Code. But the movie clips along, tricked out with state-of-the-art hardware and a hotter, brighter partner for Hanks, in the race against serial prelate murder by yet another ancient secret society with evil designs on the Vatican. As the enchantingly alliterative particle physicist Dr. Vittoria Vetra, Israeli actress Ayelet Zurer furrows her brow and wrings her hands over the catastrophic danger posed to the Holy See by a stolen canister of something nuclear, which she had designed for noble civic use.

And that’s just the half of it. The incumbent pope has died, his tongue has turned suspiciously black, and four of the extremely red cardinals most likely to succeed him have been abducted (for medieval branding and/or burning) by a wild-eyed predator named “The Assassin” (Nikolaj Lie Kaas), whose most attractive quality is that, unlike the mad albino Paul Bettany in The Da Vinci Code, he’s not into mortifying his own flesh. His rimless glasses bespeak a man of intellect, and Langdon, tossing off deconstructed signifiers, strongly suspects him of membership in the Illuminati, a secret society with Galileo among its past members and whose fondness for science has drawn the ire of the Catholic Church for hundreds of years.

Once again, there’s much screeching of tires and desperate racing through the underground tunnels of Rome’s lovelier churches. For what it’s worth, in the three years since he made The Da Vinci Code, with time off for the intelligently sedate Frost/Nixon, Ron Howard has grown into a more confident director of florid action sequences. Gift-wrapped in production design lifted from The Godfather and a score by Hans Zimmer, Angels is studded with capably brutal set pieces building to an impressive, if silly, bit of business involving a helicopter, a parachute and a huge crowd fighting over stem-cell research in St. Peter’s Square.

But what of the life of the spirit — even Dan Brown’s, channeled with dismaying fidelity to his ornate prose by David Koepp and Akiva Goldsman? Will science trump belief, or will the two lie down together like lambs? Will honest Langdon, the lubricious Dr. V and half the population of Rome be done in by Illuminati unbound or, worse, by the vicious internal politics of the Vatican? There’s no place for anything as retro as character development in the Brown universe —you’re either an angel masquerading as a demon or the other way around. When they’re not getting spectacularly knocked off, just about every salient player — Stellan Skarsgård as head of the Vatican’s Swiss Guard, Armin Mueller-Stahl as the rule-bound cardinal representing the hard-line old guard, Ewan McGregor as the progressive young papal protégé in charge of electing the new pontiff — waves at the audience to hint that he might be the lone rotten apple in Catholicism’s otherwise sound barrel.

Brushing away accusations of factual accuracy in an interview with Britain’s Radio Times, Hanks gave the movie its most succinct review: “It’s not important but it’s fun.” Evidently, the Vatican thought exactly the opposite while Howard was shooting — the director has accused the church of backroom politicking to deny him access to the gargoyles and frescoes of Rome. To my mind, the Holy See, which hasn’t distinguished itself in the field of transparency, got off very lightly. I was dying to ask the two jolly nuns sitting in front of me if they felt insulted, but I couldn’t tell if they were actual sisters or Sony plants in drag designed to show that no offense to the church was meant or taken or Sacha Baron Cohen plus one.