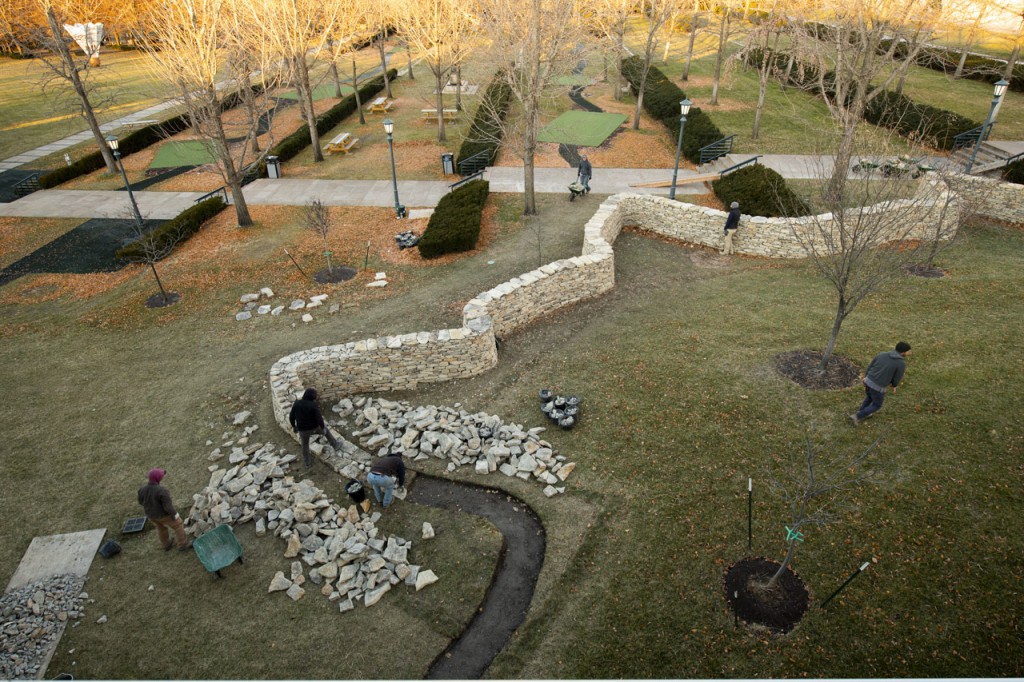 The Walking Wall making on it’s last steps before the final resting place at the Nelson-Atkins. // Photo by Gabe Hopkins.

In 2004, the Scottish artist Andy Goldsworthy traveled to the Flint Hills of Kansas. Goldsworthy, who’s 63, builds site-specific installations—his work is particularly interested in natural landscapes and the passage of time—and he was erecting a 22 x 14 foot arch on the campus of Wichita State University. The arch was built from cuts of Flint Hills limestone, and during his time working on the “Wichita Arch,” as it was called, he began to notice commonalities between his native Scotland and this part of Kansas. Goldsworthy had grown up around stone workers and lamb farmers, and now he was meeting people on a different continent who practiced similar trades. Even the landscape was similar—the way people built stone walls that carved up the land.

More than a decade later, stone harvested from Flint Hills quarries has reentered Goldsworthy’s life. For the better part of the past year, Goldsworthy has been working at the Nelson-Atkins Museum of Art on a project called the Walking Wall. (Goldsworthy has a thing for walls; in 1998, he completed a 3,000 foot wall at Storm King Art Center in New York’s Hudson Valley.) Over the course of the installation, Goldsworthy has built, then torn down, then rebuilt a stone wall at multiple locations on the grounds of the museum: across Rockhill Road, in front of the Bloch Building entrance, over the roof, down a flight of stairs, through the sculpture garden, and into the museum itself, as a permanent sculpture.

“It was an idea that I’d had in some sort of form for a long time,” says Goldsworthy. “[The Walking Wall] happening here has had a profound impact on the work. If it had been made any earlier, it would not have been at the scale, or magnitude in the way that it embraces so many different places.”

On a brisk day in November, the final phase of the installation was in process. A crew of workers was dissembling the wall in the northern part of the sculpture garden and pushing small wheelbarrows carrying up to 150 pounds of stone across the property toward a window outside of the Bloch Building. There was a subtle choreography to the proceedings: rhythmic and labored, but comfortable.

“The subtle genius of Andy is taking the ordinary and making it extraordinary,” says Steve Waterman. “It doesn’t hit you over the head—you have to engage a little bit.” 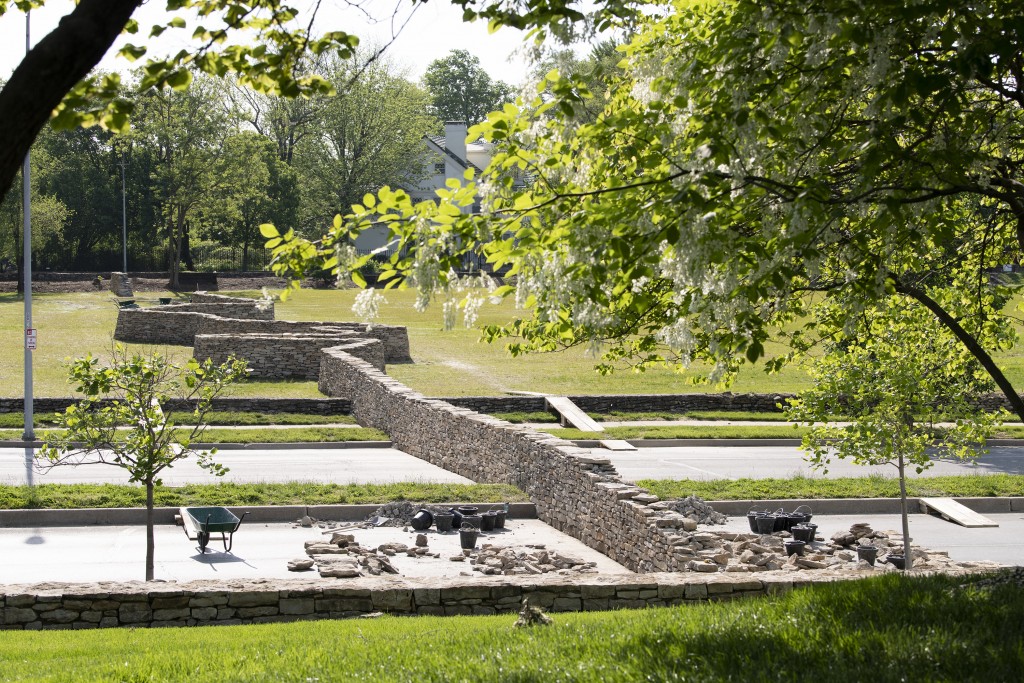 Waterman is deputy director of design and experience at the Nelson-Atkins, and he oversaw much of the logistics involved with the Walking Wall project—a particularly tricky bit of art to manage. In May, the wall stretched directly across Rockhill Road, from the sculpture park to the entrance of the museum, interrupting traffic for nearly three weeks.

“I always thought [crossing the road] would be a very explosive point,” says Goldsworthy. “In fact—apart from a fair amount of abuse from people passing by in cars—the people who actually walk to the wall, I think, felt liberated being on the road. There was a real joint enjoyment of the road, the border crossing the road and the poetry of that, and the challenge that I think really people rose to it in a way that surprised me. I was delighted.” 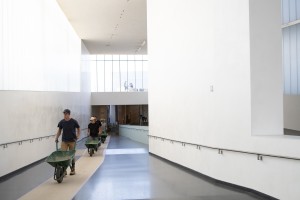 Builders making their way through the museum during phase four. // Photo by Gabe Hopkins.

During the third stage of the wall, in July, workers covered in mud were a regular presence in the museum itself, pushing wheelbarrows full of rock across a little paper path on the museum floor. (The stone had to be transported inside the museum because it was the fastest and safest way to transport it to the staircase on the east of the museum, where the wall was built down the full flight of steps during the fourth stage of the project.)

“Just like when he said to us, I’d really like to close the road for three weeks, he figured there’s no way in heck that would happened,” says Waterman. “A couple of weeks later we say, okay. He literally couldn’t believe that we did that again.”

Goldsworthy was surprised by how accommodating the museum was to his wild and difficult ideas.

“I think it is so indicative of the will and energy and open-mindedness and imagination of this institution,” Goldworthy says of the Nelson. “In any other place, there would be guards and people from the museum telling the public what to do and where to go, where not to go. There is none of that here.” 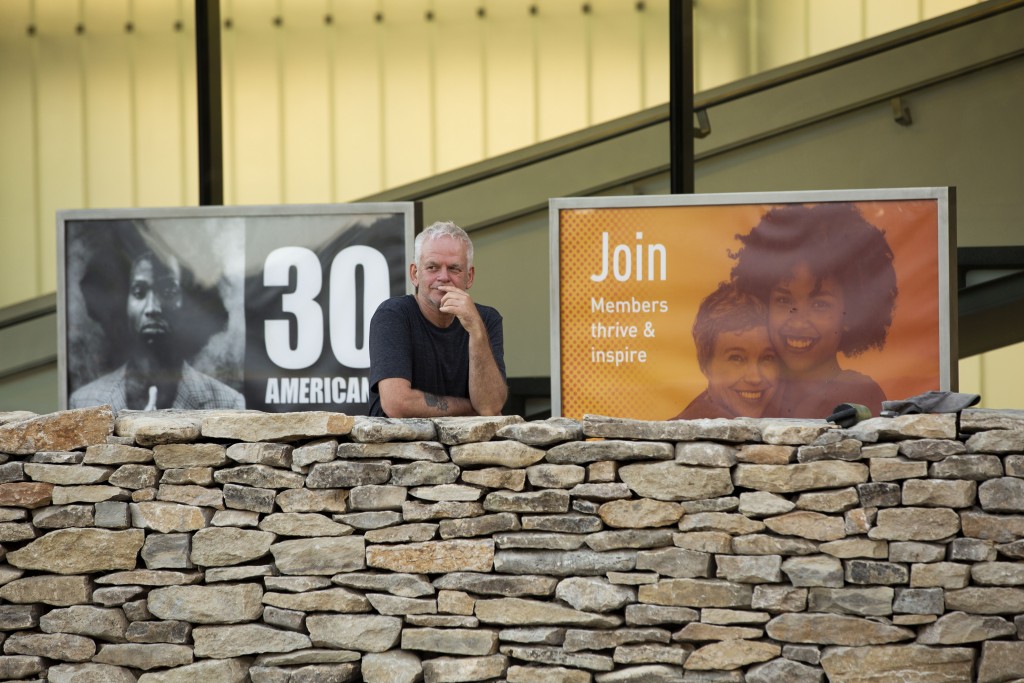 “If you sit there, it doesn’t seem to move at all. And that’s, there lies a lesson about time in life,” says Goldsworthy. // Photo by Gabe Hopkins.

Throughout the installation, the public was free to interact with Goldsworthy. A huddle of neighbors would stand around the work, watching the crew carry stone. Regulars started to stop by. At one point, Goldsworthy told Waterman that he didn’t know what to do with all the baked goods he was receiving.

“The Nelson Atkins had been extraordinary and the way that they have let people meet the wall on the walls terms and then their own terms and have never apologized for the inconvenience of the wall,” says Goldsworthy. “In any other place there would be guards and people from the museum telling the public what to do and where to go, where not to go, there is none of that here.”

Goldsworthy has a team of trained British wallers who travel with him on projects like the Walking Wall, but he also insisted that artists and local craftsmen—not big contractors—be involved in building and dismantling the Walking Wall. He wanted people moving stone with their hands, one at a time, using no more than wheelbarrows, shovels, and buckets. One of the locals chosen was Matthew Hayden, a metal sculptor who also has a landscaping and hardscaping business that occasionally repairs walls in Brookside.

“A lot of people would come up and wonder, ‘Why this is going on? Why are you doing this?” Hayden says. “It’s a dance. It’s also a performance. The song being performed is us moving this stone wall.” 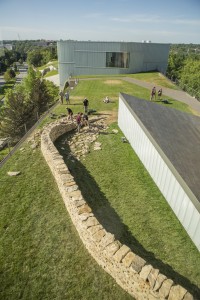 The wall as it crosses over the roof of the Bloch Building. // Photo by Gabe Hopkins.

In today’s political climate, the wall has taken on a new meeting. Goldsworthy recalls overhearing a passerby say, “It’s a political statement,” and someone responding, “We should be tearing down walls, not building them.” In the fall, a local pastor held a sermon on the wall. A meditation class met at the wall during each of its stages; they’d walk along the path from where the wall had last been, following the dead grass the heavy stone left on the museum’s lawn.

“It’s just had all these different kinds of responses, which I think have been amazing,” Goldsworthy says. “Certainly, it has taken me to territory that I never expected. And I can ask no more of a work of art than that.”

In two to three years time, Goldsworthy and the Nelson-Atkins are in talks of revisiting the project for an exhibit. Goldsworthy isn’t sure yet what the exhibit will look like, but he says he’s eager to return.

“He’s trying to get into our lives. He’s trying to change the way we see the way things are,” says Waterman. “Working right next to him all this time, I’ll still be surprised at what he’s seen in the project.”

Today, the wall sits on the hill leading south toward the Bloch Building. A portion of it enters into the museum through a window, stopping in the atrium. In its final resting place, the journey of the wall is invisible, but the history isn’t.

“It has rested for several weeks between the stages, giving a chance to become even more timed into people’s minds, which makes the movement of it that much more poignant,” Goldsworthy says. “It is now ingrained in the memory of the people who live here will pass the story of it being here.”

The Walking Wall is on view permanently at Nelson-Atkins Museum of Art.