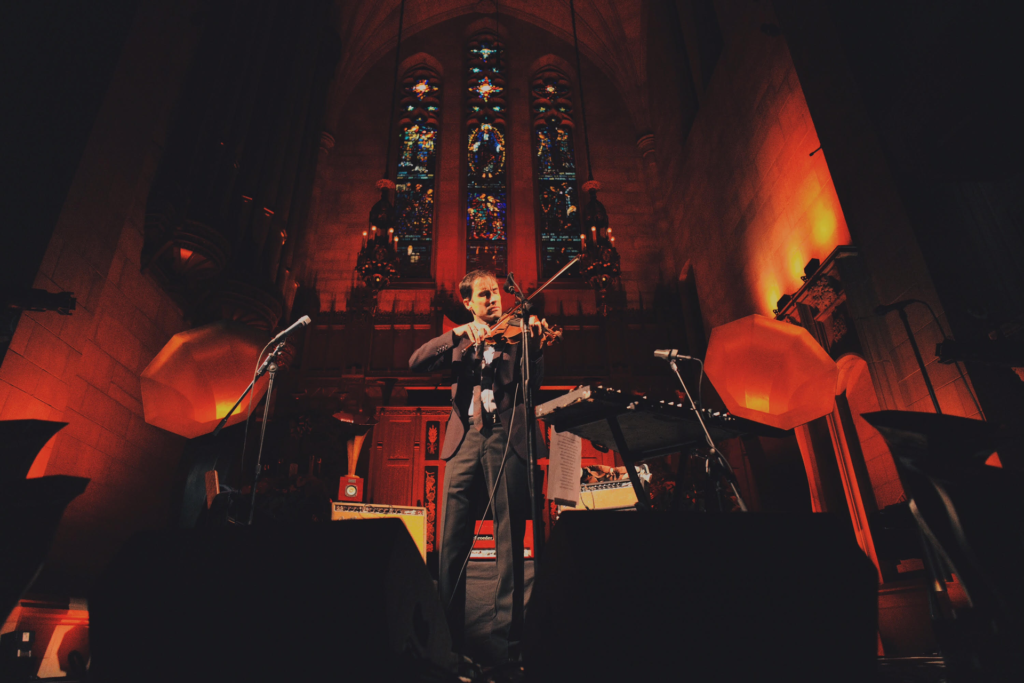 Fiddle player with hot-jazz swing revivalists the Squirrel Nut Zippers. Experimental indie-rock with the Bowl of Fire. Contemplative folk-classical solo albums. Andrew Bird’s career is a series of gentle zigs and zags that add up to a diverse and impressive body of work.

This Saturday, Bird performs with the Kansas City Symphony at the Kauffman Center. These symphony shows represent yet another new chapter in Bird’s book, and we spoke to him about it a few weeks back.

The Pitch: When you perform with a symphony, how does the process begin?

Andrew Bird: Well, this is the first time I’ve done this, so I’m right in the thick of it. Over the years, I’ve had a lot of requests from different orchestras to come do a program with them, and I kept kinda balking at it. I didn’t feel ready. I wanted it to be more than just a indie-rock guy up there with an orchestra backing him, making it sound more romantic. I wanted it to be its own, stand-alone thing.

It’s kind of a heavy thing for me. Since I left music school 23 years ago, I’ve been completely outside the classical world, and the classical process, so coming back to it, I wanted it to be done right. I wanted to find the right person to work with. I can still read music, but I don’t really have it together enough to put a symphonic score together.

I worked with Gabriel Kahane on the arrangements, and we basically took six songs we thought worked together and made a suite out of them. You’ll recognize them from the records, some of them, but they’re vastly different in a lot of ways. They’re strung together with a lot of interstitial music and cadenzas and improvisations and extended techniques and all of this stuff that worked. Gabe would send me MIDI mockups as he worked, and we’d just go back and forth to figure it out.

The process of changing songs isn’t all that unfamiliar to you, though, right? You’ve recorded multiple versions of some songs, changing them into vastly different pieces.

Yeah, but my process is more of an oral tradition — like a folk musician or a jazz musician. I’ve never quite jibed with the classical tradition, so my inclination to never play the same thing the same way twice — that’s the thing we’re going to have to reconcile with these first two shows. For instance, there’s a piece of mine called “Weather Systems” which I play solo. I’ve been playing it for 12 years. It’s completely out of time. Most of the song is out of time, yet there’s cues for strings to come in or brass to come in here or there, and we’re just puzzling through how this is going to work.

For any piece of music that is so elastic, like this one is — it speeds up, slows down, [and] never really, until the very end, locks into any sort of groove, so it’s incredibly improvisational. Gabe would listen to performances from 2007-2017, and the way I played it every year was vastly different. So, we’re still trying to figure that out.

I was just on the phone with Gabe, playing it, and was like, “This is how I do it, but the score says this. Is that going to be a problem?” It’s more a difference of process than a difference of style. The music is going to sound familiar to me. I grew up playing in orchestras and classical music, so I know the culture and I know the music, but it’s the process that’s different from anything I’ve done over the last 25 years.

What made this the time to get back into it, then?

The L.A. [Philharmonic] approached me about doing a thing for their 100th anniversary, and I insisted that [Philharmonic Music and Artistic Director Gustavo] Dudamel conduct. We’d been talking about it for years, and a lot of time, the pop guest will get put with a guest conductor, but I wanted to do it with Dudamel, and they finally got back to me and were like, “OK, we’ve got this night to do a full Philharmonic with Dudamel.”

Actually, my manager kind of tricked me into doing it. [laughs] She really wanted me to do this, and I was really apprehensive for years, and then I was finally like, “It’s time to bite the bullet. Let’s do this.” I think it’s going to be really cool.

Andrew Bird performs with the Kansas City Symphony in the Kauffman Center’s Helzberg Hall on Saturday, September 29. Details on that show here.