Gov. Mike Parson picked Bailey to replace Eric Schmitt, who was elected to the U.S. Senate in November.

Attorney General Andrew Bailey is sworn into office Tuesday in Jefferson City by Judge Kelly Broniec of the Eastern District Missouri Court of Appeals while his wife and children look on (Rudi Keller/Missouri Independent).

The Missouri Attorney General’s office will operate in “unyielding pursuit of victory,” Andrew Bailey said Tuesday as he was being sworn into office.

Bailey, in a short speech before a crowd of about 150 gathered at the Missouri Supreme Court building, said he’s grateful to Gov. Mike Parson for appointing him. Speaking to reporters afterwards, he said he will not take orders from the governor.

Bailey worked in Parson’s office since 2019 and has been general counsel to the governor for the past year.

Bailey told reporters after his speech that his office would be transparent. He also said he would enforce all the laws where he has power to act, including a new state law making it a crime for homeless people to sleep on public property.

“I am dedicated to the principle that I am here to enforce the laws as written,” Bailey said.

Bailey, 41, was appointed by Parson just before Thanksgiving to replace Eric Schmitt, who on Tuesday was sworn in as the newest U.S. Senator from the state.

As he introduced Bailey Tuesday, Parson noted that after Scott Fitzpatrick is sworn in as auditor and Vivek Malek takes the oath as treasurer, he will have appointed five statewide officeholders since becoming governor in 2018.

“I’ve had the opportunity to vet the best Missourians when they are looking for positions to move up to,” Parson said.

Bailey went through the same process as everyone else who sought the job, Parson said.

“He had some very strong competition out there that we had to weigh out and figure out who we were going to select,” he said.

Parson joked that he swore Bailey to a “blood oath” not to seek any other office in 2024.

The seven most recent attorneys general have all run for higher office, and the two most recent, Schmitt and Sen. Josh Hawley, sought soon after voters gave them their first elected terms in the office.

Prior to going to work for Parson, Bailey was general counsel for the Missouri Department of Corrections. He began working in state government in 2014, when he was hired as an assistant attorney general.

He is an army veteran and referred to his combat experience in Iraq as a model for running the attorney general’s office.

“I will lead this office with the same steady hand and an unyielding pursuit of victory,” Bailey said. 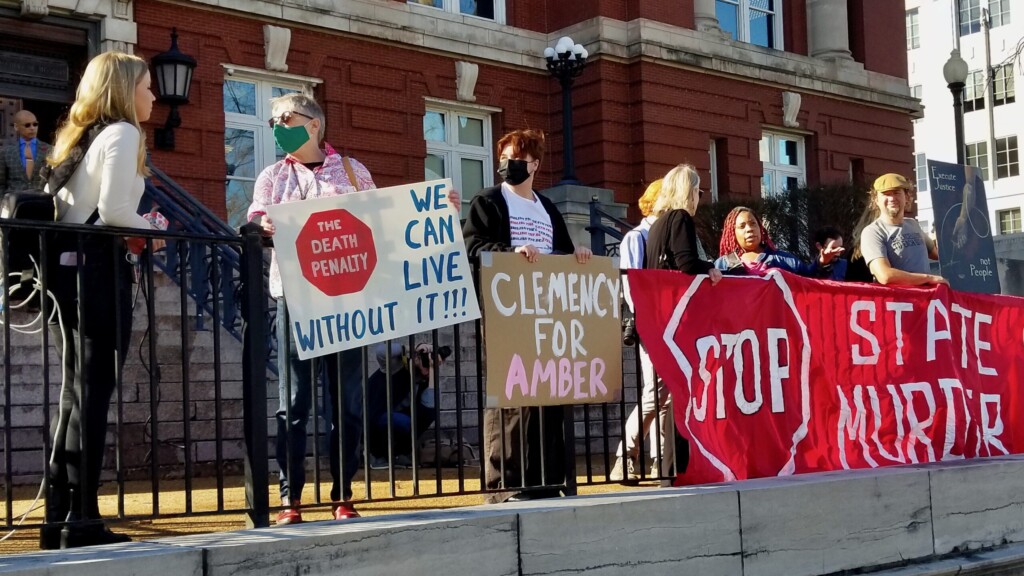 Opponents of the death penalty protest Tuesday outside the Missouri Supreme Court building against the execution of Amber McLaughlin, who is transgender and used the name Scott McLaughlin when he was convicted in the 2003 rape and murder of Beverly Guenther (Rudi Keller/Missouri Independent).

Under both Schmitt and Hawley, the attorney general’s office has engaged in numerous lawsuits against the policies of President Joe Biden, ranging from challenges on immigration policies and accusing the administration of colluding with social media companies to suppress free speech to opposing plans for student loan debt relief.

“We are going to continue to push back against President Biden’s illicit federal overreach and we are going to look for new opportunities to do that,” Bailey said.

While swearing-in took place inside the Supreme Court building, a half-dozen protesters outside demonstrated against plans to execute Amber McLaughlin, a transgender prisoner who was convicted in 2003 of the rape and murder of Beverly Guenther in St. Louis.

McLaughlin is scheduled to be executed Tuesday.

Sue Gibson of Jefferson City said the demonstrators were there to send a message to the new attorney general in addition to opposing the death penalty in general.

“Killing is wrong,” Gibson said. “Missourians as a whole oppose the death penalty and he could stop the killing.”

Told that Bailey said he would lead the office in pursuit of victory, Gibson said it is the wrong priority.

“He should be in pursuit of justice,” she said. “It is a travesty for him not to make that his highest priority.”