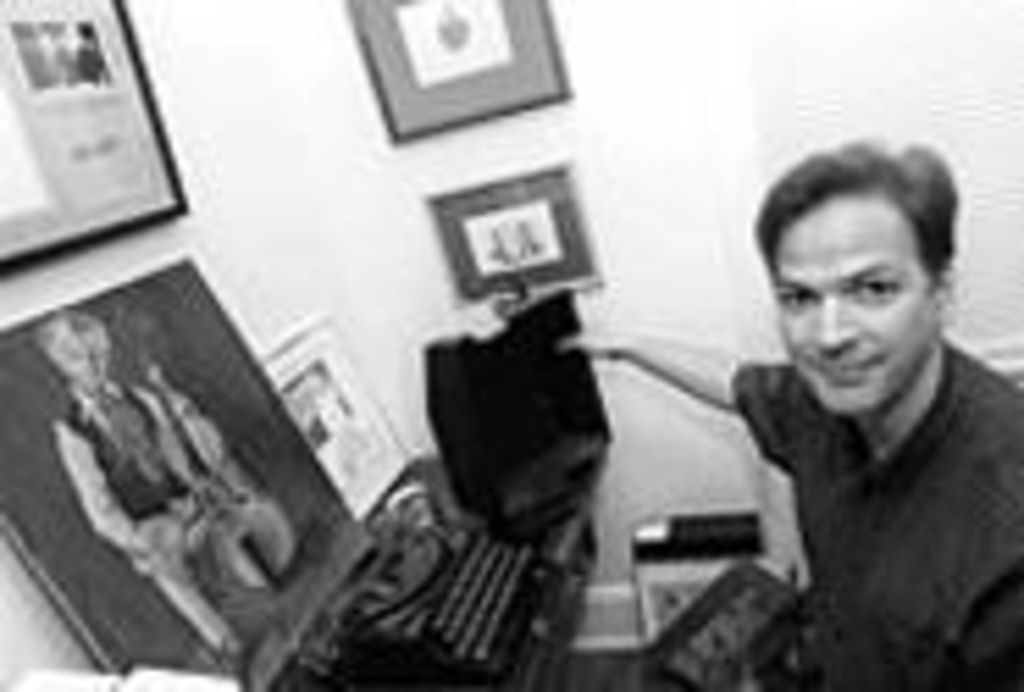 Louis Colaianni is an associate professor in the University of Missouri-Kansas City’s theater department and, as such, has been around theatrical people and things all of his professional life. But, perfectly manicured hands down, the most extreme of these acquaintances was Quentin Crisp, the late author, satirist, illustrator and, in Crisp’s own words, “professional failure.”

Crisp was born with the bland moniker Denis Pratt, which he said he “dyed” to become Quentin Crisp. He began his one-man parade as an open homosexual in the 1930s, making good on one of his highly quotable mottoes: “Exhibitionism is a drug.” He so flaunted his sexuality that he was asked to leave a “normal” gay bar of the time. Vilified at home and on the streets that he’d turned into his personal fashion runways, he emulated American movie actresses — “especially Garbo,” Colaianni says. By the time he was a senior citizen, Crisp essentially had become one of those actresses, playing Queen Elizabeth I in the 1992 film Orlando.

Before Crisp’s death at age ninety in 1999, Colaianni and Crisp hatched an eccentric plan to found “a play museum” dedicated to Crisp’s legacy. Though Crisp spent much of his life in England, serving as The Naked Civil Servant of his autobiography, and his later years as a Resident Alien in a ramshackle boarding house in New York, the museum is housed in Kansas City. No Smithsonian this; it is several boxes of memorabilia in one room of Colaianni’s home on Rockhill Road.

“The museum was founded for the amusement of me and Quentin,” Colaianni says. “It was an insane venture, but we got a great kick out of it.” Colaianni will talk about the museum and his nearly two-decade friendship with Crisp at a screening of The Naked Civil Servant July 4 as part of the 2001 Kansas City Gay and Lesbian Film Festival at Tivoli Manor Square.

Crisp came into Colaianni’s life after the writer’s appearance on Tom Snyder’s The Tomorrow Show. “I felt immediately connected to him,” Colaianni recalls. “Quentin had said that when he moved to New York, he would get a phone and put his number in the phone book. And I kept checking directory assistance until one day he answered. I was a young actor at the time, and I asked him, ‘What do you see as the role of the gay actor?’ He said, ‘An actor is supposed to play every other role except himself.'”

They were friends from that point on, seeing plays and dining around New York, and when Colaianni moved to Kansas City, they talked on the phone once a week. From those chats, the museum was born.

The institution’s letterhead hints at its sincerity while asserting that it is wholly tongue-in-cheek: It’s defined as “a for-prophet organization” and lists such “bored members” as performance artist Penny Arcade and drag queen Hedda Lettuce. (Crisp received one letter from “Miss Lettuce,” writing about this guy from “Bumfuck, Missouri,” requesting her presence on the ersatz board.) The stationery also notes that the museum boasts variable hours, a gift shop and a cafe.

“Of course, the cafe is light fare from whatever’s in the fridge,” Colaianni says. “And from the gift shop is a photocopy of a lock of Quentin’s hair.”

The museum does contain real items: three framed locks of Crisp’s hair; numerous photos of Crisp and Colaianni and several solo portraits of Crisp; an oil painting of Crisp (he was a painter’s model in England in his thirties and forties); the passport marking Crisp’s entry into America. The typewriter he used to write The Naked Civil Servant is marred by chipped keys where the author’s sharp, painted fingernails pecked out his story, one he equated with “a rotten rope hanging over an abyss.” An original copy of Crisp’s book Colour in Display has been defaced — Crisp crossed out his name and wrote “The most notorious homosexual in the world” on the title page.

But for all the serious Crispiana in his possession, Colaianni maintains that, having created the institution as a lark, he’s in on the joke. Take the piece he calls “Unworthiness in a Box.” Colaianni would ask Crisp to say “I am not worthy” into the phone, which he would hold inside a box; having supposedly captured the feeling, Colaianni would then seal the box. It’s a box of nothing, but Colaianni treats it as if it was a Fabergé egg.

The museum has received a grand total of four visitors (and hits on the Web site quentincrispmuseum.com have yet to be tallied). “So far, no visitors from England,” Colaianni says, “but if they’re really brave, they might make the pilgrimage. World travelers can count on two things in Kansas City: blood-red steaks and the Quentin Crisp Museum.”

Colaianni teaches speech and voice and is considered an expert in phonetics and the delivery of Shakespearean dialogue. (His newest book, How to Speak Shakespeare, is about to be released by Santa Monica Press.) So it’s forgivable when he lapses into the unforgettable cadence of Crisp’s own speech. In the manner of letters in which each successive line begins beneath and to the right of the line above, Crisp even grants the Pitch a letter from beyond the grave:

for coming to my museum.”

Crisp “got around really well until his late eighties,” Colaianni says, “and his mind never went. But he lost his spirit. His exhibitionism and sociability — those were fading. I really miss him.” And Colaianni recalls something Crisp said about his declining years: “At the end of the act, you can overact shamelessly.”