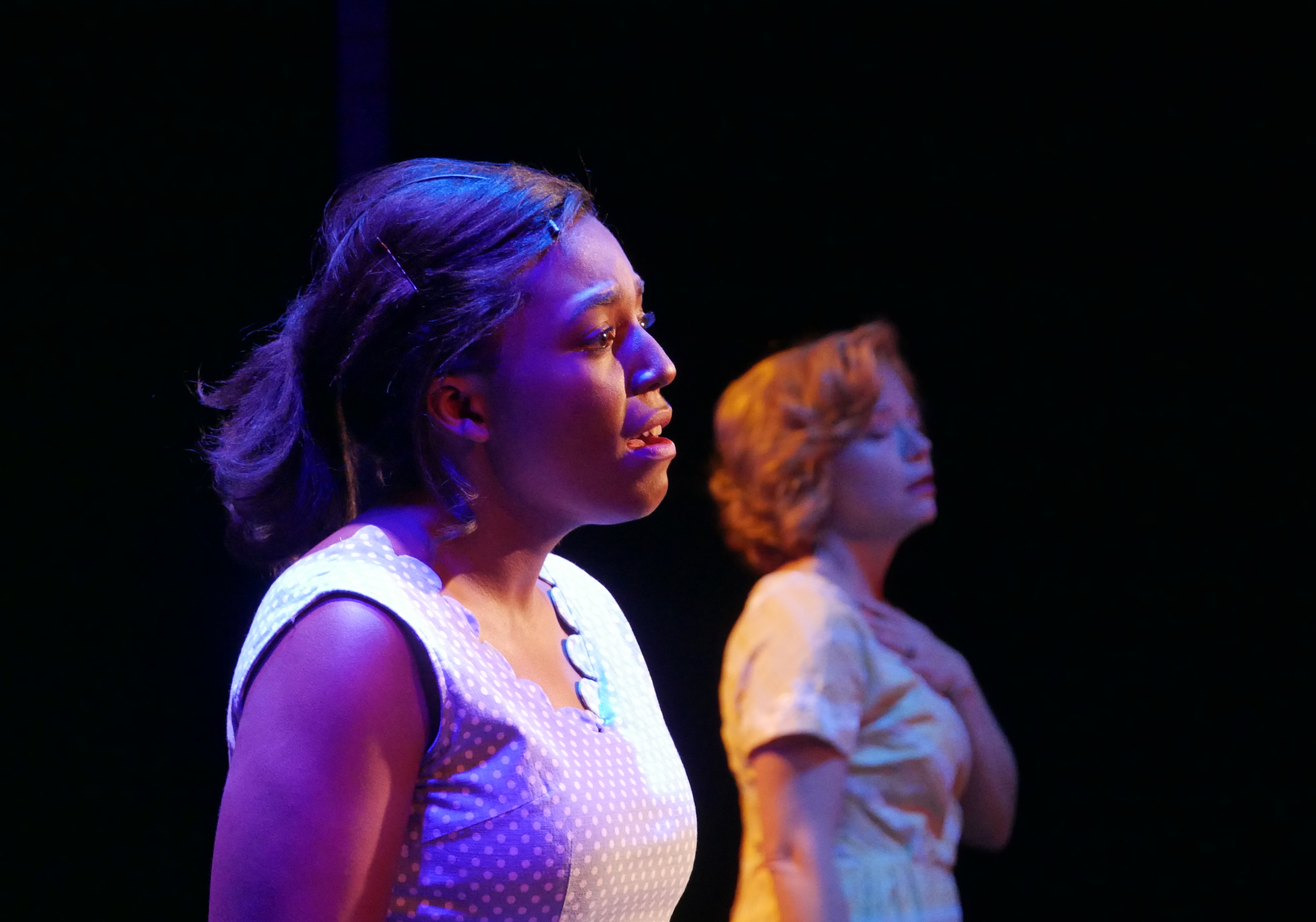 In the Sixties in the South (and well before), black women labored as maids in white families’ homes. They cooked, cleaned, laundered, and looked after the kids. Many idealized stories have been written and portrayed on-screen about these women’s roles.

Caroline, or Change, at Spinning Tree Theatre, is not that kind of story. Yes, there’s an African-American maid at the center of this musical, who works in a Southern Jewish home (in Lake Charles, Louisiana) in 1963. She cooks, cleans, launders, and looks after the kid. But this composition by Tony Kushner (Angels in America, and screenplays Munich and Lincoln) doesn’t sentimentalize. Far from it.

The show is sarcastic, funny, sad, and sometimes raw—a compelling two-act piece, partly based on Kushner’s past, that looks back at a particular time, from different points of view. Mostly, though, this story belongs to Caroline, and it’s told on Caroline’s terms.

Director Michael Grayman-Parkhurst, Spinning Tree’s artistic director, helms an excellent 15-member cast of actor-singers as well as a five-piece band. As sprawling as that sounds, the controlled, compact production—staged simply on a gradation of platforms (set design by Atif Rome)—homes in on the interplay of the characters, and wallops us with the affecting force of their grievances, troubles, and hopes. The talented musicians, conducted by music director and keyboardist Brad Foster, drive the show’s movement in seamless partnership.

Caroline, or Change (book and lyrics by Kushner; music by Violet and Fun Home composer Jeanine Tesori) played on Broadway in 2004, and a revival opens there again next year. It revolves around the strong, complicated Caroline (a superb Illeana Kirven) and touches, too, on the lives of her friends, her children, and the family she serves—eight-year-old Noah (eighth-grader Valen Jurkowski, very good); his stepmom, Rose Stopnick Gellman (Jennifer Mays, sensitive, charming and nuanced); and his father, Stuart Gellman (the adept Robert J. Hingula). 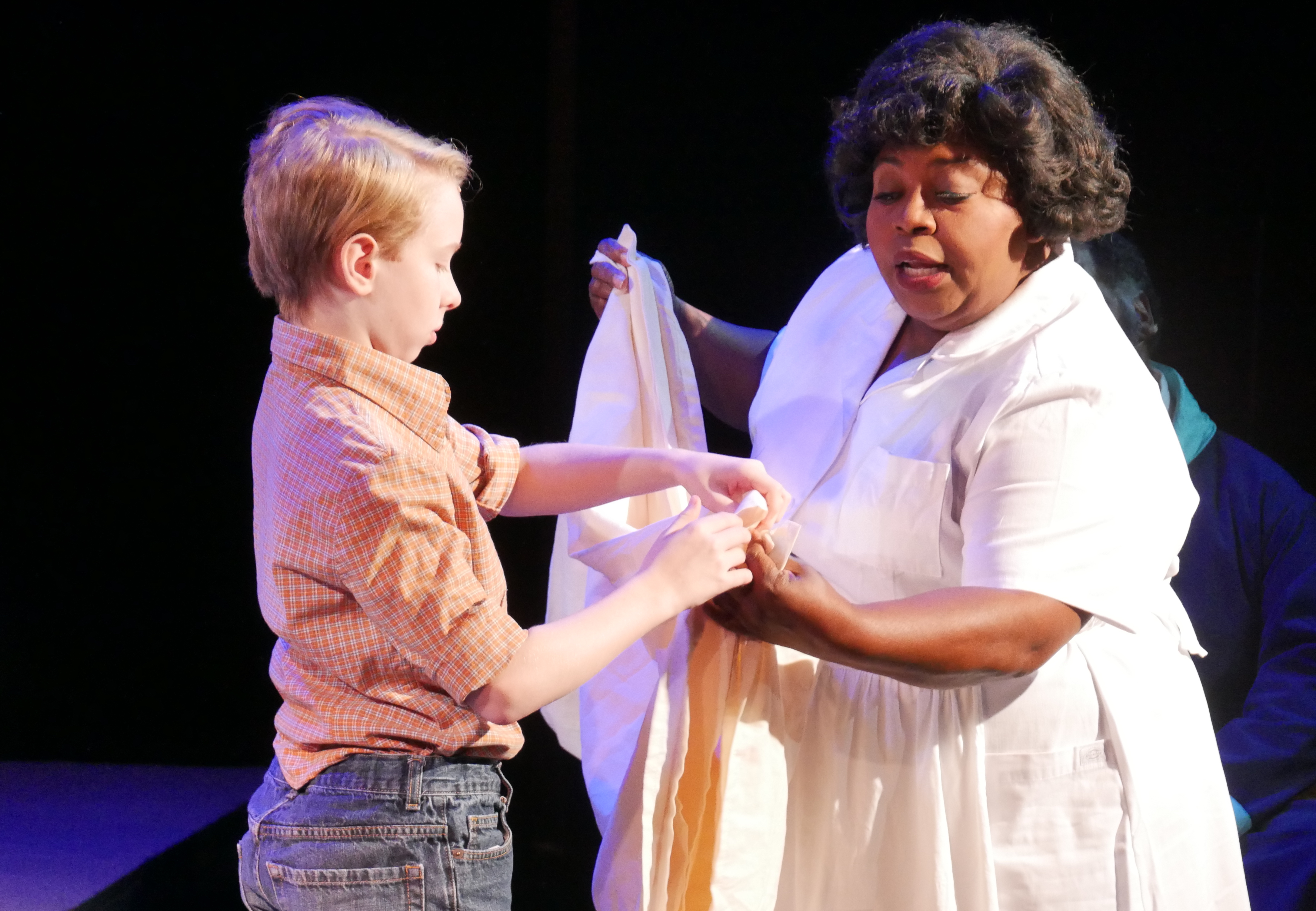 The show is entirely sung through, Kushner’s verse propelled by a score richly layered with notes of jazz, blues, pop, and a little bit of Klezmer. It’s an impactful and clever melding of words and sounds that binds us to his characters and the stories they have to tell. The songs aren’t the hum-out-the-door kind, but they leave an indelible impression.

In a riveting portrayal, Kirven’s Caroline is a force from the start. She works for too little money, what the Gellmans can afford. But with four kids, the divorced 39-year-old is stuck in a job she never saw as lifelong: I thought for sure by now I be better off than this … Should be somewhere being kissed by Nat King Cole. She laments the hot basement in the swampy soil, where she works and sweats five days a week: There is no under ground in Louisiana, there is only under water. Noah, who grieves for a mother who recently died, runs down to see her every afternoon, finding comfort in the stoical, cranky Caroline’s company. He seems to relish a Caroline who’s always mad.

Rose instructs Caroline: We have to teach Noah to mind his money, to handle change (which he habitually leaves in his pockets). Rose wants to help Caroline out: When you do the washing, just keep it. But then Rose worries that she might have overstepped: I hope she’s not offended. I hope this is the right thing.

It’s all about the meanings of, and approach to, change. Rose, a recent NYC transplant, tries to fit in with Southern life and a still-grieving family. Caroline’s friend Dottie (Keshana Cook, first-rate)—who memorably carries on an extended argument with Caroline, in song—attends night school. Caroline’s teenage daughter, Emmie (Maya Strickland, skillful), leans into activism, which puts her at odds with a mother painfully holding to the status quo. (The Gellmans’ support of civil rights is divulged in a comically conflict-filled Hanukkah dinner.)

Kushner inserts whimsy and illusion with anthropomorphic roles—the washing machine (Victoria Barbee); the dryer and the bus (Douglass Walker); the moon (Angela Hagenbach); and the radio (Jacquelyn Price, with Cook, Strickland or Barbee), a group of backup singers reminiscent of the Supremes (costumes by Kristin Cook). All give fine performances, including Grandpa and Grandma Gellman (Evan Gamsu and Ruth Baum Bigus) and Rose’s dad, Mr. Stopnick (Marilyn Lynch), in small but effective, and often humorous, roles.

Caroline, or Change revisits the place and the person of the family maid in a way not seen before. Poetic and practically operatic, it’s an intimate and perceptive depiction that resounds universally as well. Change come fast and change come slow, we repeatedly hear, but change come.

The Unicorn Theatre’s American Son speaks to us all