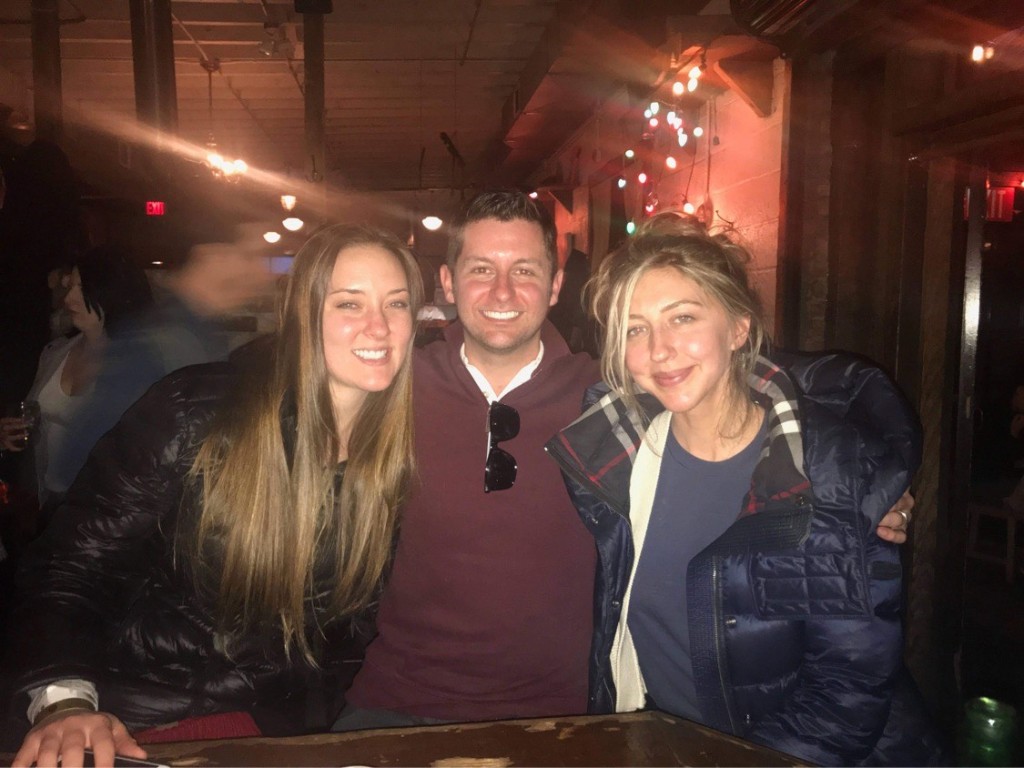 Two of her most popular sketches, “Taco Math” and “Amusement Park”, are set in two Cowtown landmarks (Jalapeño’s and Worlds of Fun), and if you see the show’s closing wave, you might catch her wearing a Chiefs dress with a matching COVID mask.

It’s probably not surprising that she’ll be returning to KC this Saturday to raise money for her younger brother Ty Gardner’s campaign to represent Overland Park’s Ward 4 on the city council.

On Thursday at 7:00 p.m., there will be a private dinner and happy hour with both Gardners. The next evening, Heidi wll be taking part in a happy hour from 5-7:00 p.m. She’ll also be taking part in a Q&A at 7:30 p.m., taking signed photos with fans. Tickets for all events are available here—proceeds will go to supporting Ty’s campaign.

The ward the younger Gardner wants to represent ranges from W. 119th St. to W. 143rd St. & Antioch Road. The primary election is on August 3, and the general election is on November 2.

When I asked the 31-year-old candidate why he wants to serve on the council, Ty replied: “What drove me to run is this idea that we are not operating the way that the second biggest city (with 191,000 people) in Kansas should be (at 389,877, Wichita is first). We’re operating with a small-town feel as far as our local government goes. I don’t think that is going to be a recipe for success in the long term.

“What I mean by that is when I started researching this, I was like so many in my generation—I wasn’t following local government. And then COVID hit, and we all recognized how important local government is. I thought, ‘I need to know what’s going on. I’m going to go to my Council representative’s Facebook page and website. I’m going to sign up for their newsletter.’ It was at that time that I realized hardly any of those things existed for my representative. That’s how we would have been operating 20 years ago. The landscape is so much different.”

Although he cites coverage in the Shawnee Mission Post, Gardner says that media consolidation has diluted coverage of local issues. “They’re having to carry the load for all these cities around us. What that says to me is local government in Kansas City is always going to get covered heavily. Most government in Overland Park is not. We need our local leaders to fill that void to educate our population. That means being accountable and transparent. As we’ve seen over the last year, the city has a long way to go toward being transparent,” he says.

Ty has worked with project, supply chain, and sales management for Johnson County-based container company Huhtamaki. He’s also volunteered for Big Brothers Big Sisters. He holds an MBA from Indiana University’s Kelley School of Business as well as an undergraduate degree from KU, where he is currently studying law.

He hopes to carry one of his campaigning techniques into office: He responds to messages on his site, TyforOP.com.

“It’s not always fun to get home from a long day and read a message about how much you suck. It’s what you have to do to be accountable to the people that you’re asking for their vote. There have been so many times when I’ve been knocking on doors since March. People were giving us weird looks because they’re not thinking about voting in March. There have been so many people who have come to me and said, ‘You are the first candidate to come and knock at my door and ask me what I think.’ That’s the sort of back room dealing you don’t expect in 2021.”

“I put my cell phone number out there publicly,” he adds. “That’s important to be accessible. People don’t have time to sit and watch a two-hour city council meeting. That’s why I put those videos on my Facebook page. People don’t know what’s being talked about when we discuss budgetary issues.”

The Call of the Future

When asked if she noticed political ambitions or aptitude in her younger brother, Heidi recalls from New York, “Other than being a good big sister, I really believe in Ty. Even though he’s my younger brother, I’ve really looked to him for leadership, inspiration, and advice my whole life. [He is] a go-getter. Once he told me he was going to run for City Council, it just all made sense. It was kind of the same when I decided to pursue comedy, he said, ‘I’ve just always known this thing about you. What can I do?’”

The older Gardner is an alumna of Notre Dame de Sion, but she wasn’t involved in theater there. She initially worked as a hairdresser until she joined the comedy cast of The Groundlings Theater & School based in Los Angeles, which boasts alumni such as Kristen Wiig and Maya Rudolph.

Since then, Heidi’s played a hairdresser in the Netflix movie Otherhood. In a visit to Kansas City in 2019, director Cindy Chupack recalled, “She only told me after her two auditions that she had been a hairstylist, which she was playing on the show, so that was really cool. She’s amazing.”

Heidi adds, “It was a great honor to play hairdresser because the whole time I was a hairdresser and not acting, I would always see people in movies and TV holding the scissors or the blow dryer wrong. Sometimes whoever they cast didn’t have lines. It was like, just get a real hairdresser.”

Nonetheless, Ty recalls that he encountered omens of Heidi’s later career. “She was not the classic definition of the performer as far as you know, doing plays or musicals or that kind of thing. But, I’ll tell you what: all you had to do was just listen to her [make] a prank phone call. She just always had this uncanny ability. My friends thought I was pretty good [at prank calls], and I was like, no, guys, I am nothing. You need to hear my sister.”

“That’s kind of what gave me the spark,” she admits. “I would have done Crank Yankers for free, but the fact that I got paid to make prank phone calls was the ultimate [win]. It was little Heidi’s dream come true. I knew I was getting into all that trouble for some point.”

More recently, Heidi’s shout-out to the Viking Voyager ride at Worlds of Fun demonstrates how having lived in Kansas City still inspires her.

“I love Kansas City with all my heart,” she says. “When I wanted to write a sketch about an amusement park this summer, of course, I wanted to set it at Worlds of Fun. It was Worlds of Fun that gave the idea, waiting in line to see who’s going to ride with who. Any way I can get Kansas City noticed is always fun for me.”

While Heidi might have fond memories of the food at Jalapeño’s, calculating the tips and who gets the free taco can be needlessly confusing. In “Taco Math”, she and Jessica Chastain prove that being smart doesn’t mean being able to handle user-hostile smartphone apps.

“That was really based on a true story. My friends and I ate at Jalapeño’s, and we could not figure out the special taco deal. These places in Kansas City are responsible for so much of my comedy and point of view,” she recalls.

In a less locally-grounded sketch called “RV Life”, Gardner earned new fans among women of an older generation who had regretted following their husbands’ retirement living whims. As anyone who has traveled in one can testify, RVs are often more exhausting than relaxing.

“That’s my favorite part of playing characters—when something can come off as funny but also has humanity and the truth. I was on YouTube searching for inspiration. I found this couple where the husband said, ‘The second I retire, it’s time to get the RV.’ They kept cutting to his wife (Gardner’s voice turns into a flat staccato), and she kept saying, ‘Uh huh. Me, too.’

“He talked about how free he was and then got into this sewage disposal [rant]. They were on the open road, but it was so much work. It still felt like she was put upon.”

Gardner is also known for “Angel, Every Boxer’s Girlfriend from Every Movie About Boxing Ever”, which she compiled from seeing Rocky, Southpaw, The Fighter and, oh, you get the idea, even if you’ve taken as many blows to the head as Adonis Creed.

“All these girlfriends have the same point of view,” she says. “I just commented on something. I [thought] this could be good.”

Gardner is also frighteningly convincing as an 80s cocaine wife and as a longsuffering protégé of Michael Jordon.

While Gardner may be long out of her adolescence and unpaid crank calls, she frequently plays juveniles on SNL, and is best known for Bailey Gismert, the teen film critic. Gismert never lets irrelevance get in the way of, oh, anything.

“Some of these [bloggers] seem insecure out in real life, but on camera, they’re kind of not afraid to say anything,” she explains. “Because they have no filter, every facial [expression] is going to show up heightened. What I love about Bailey is that I grew up as a nice girl people pleaser. I love that with one facial expression, she’ll show you exactly what she means.”

When asked how she can play young people like Bailey and “Goop Girl” Baskin Johns, she observes, “I have nieces on my husband’s (Zeb Wells, Spider-Man, Heroes for Hire comic artist) side, and they’re all kind of teenagers or pre-teens. I’m around that energy and can definitely tap back into that energy and those feelings of what I was going through at the time. I’m very nostalgic, so I’m in touch with that part of myself. I can always harken back to that moment. I’m always waiting for that moment when I am going to grow up.”

“I’ve been waiting for it to happen for four months. Until you become an aunt, you don’t know how much you can love a little baby,” she says.