An afternoon at Imagine That!, a dynamic hub for artists with developmental disabilities 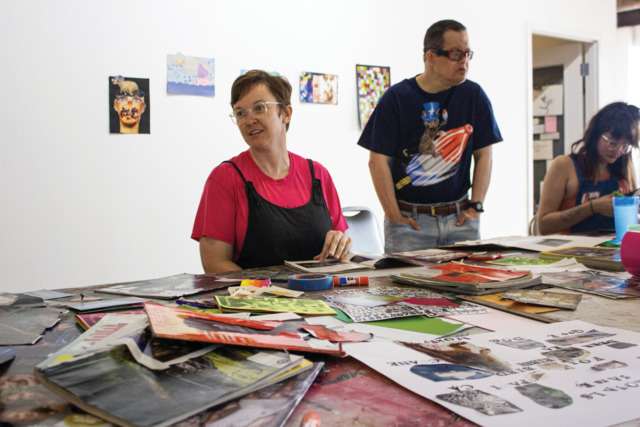 It’s Community Collage Day at Imagine That!, a Crossroads studio for artists with developmental and intellectual disabilities, and I’m sitting beside Johnny B, one of my favorite artists. The center of the gallery is filled with tables covered in magazines, glue sticks, and scissors to make collages. We — Johnny, other Imagine That! artists, myself — are sorting through stacks of old magazines like National Geographic, Better Homes & Gardens, and Vogue, seeking striking, collage-friendly images. Johnny’s a prolific collage artist, and his work is humorous, irreverent, strange; it often includes crudely drawn smiley faces pasted over glossy magazine models’ faces. Captions range from the absurd to the political.

In a few weeks, the collages created today — both by the public (people like me) and Imagine That! artists — will be displayed as part of “Paper Cuts,” the studio’s First Friday exhibition opening. Students with developmental disabilities are often segregated into special education classrooms at school, and as adults it’s rare to find people with those disabilities socializing in the same kinds of spaces as those without. Imagine That! endeavors to do the opposite: to center its artists in the larger arts community and society in general.

“What has surprised me working here is that it’s just so easy to be around people with developmental disabilities,” says Jillian Youngbird, who has worked at Imagine That! since its founding in 2012. “These people here are my best friends. It’s made me realize how sad it is that they’re just separated from the time that they’re children. It’s such a shame, a waste. It’s a loss for everyone.”

The organization’s aspirations go beyond the making of art and extend into helping set goals for the artists’ personal and creative development and facilitating outings that help Imagine That! artists make connect with others.

Imagine That! now boasts a roster of 63 artists, with around 30 in the building on any given day.  The organization’s move, two years ago, into its current building near 20th and McGee streets, increased capacity, but there’s still a waitlist for new artists. “I wish more could come,” says Youngbird says. “We can only hold so many people in the building at once.”

Artists arrive each day and check in with their floor lead to see which room they’ve been assigned to for the day. Each space has its own unique offerings. The Lab has printmaking equipment and a large photography backdrop. The Bat Cave offers ceramics and fiber workstations as well as computer workstations for digital art making. The main studio space, The Sun Room, has ideal light for oil painting and houses an art reference library. There’s a music room with a recording studio, and a wood shop, too. As for the outings: some days, it’s a gallery or museum visit, others it might be bowling or the zoo. They do some volunteer work, too, at organizations like Connections to Success and Harvesters.

The public is welcome to stop by anytime the studio is open, but First Fridays is when most outsiders see for themselves what’s happening at Imagine That! Visitors can buy art just like at any other gallery, though it’s cheaper; most is in the $5-20 range.

“We try to make sure every artist has at least one piece of artwork every month, so everyone has an opportunity to sell work,” Youngbird says. It’s an 80/20 split, with artists receiving 80 percent of the sale price.

In keeping with Imagine That!’s goal of eliminating silos, the staff supports the artists by helping get their work into as many outside gallery exhibitions as possible. Johnny B. — his last name, like all Imagine That! artists, is withheld from the public to comply with HIPAA privacy rules — was featured on Missouri Bank’s art boards, and he had a solo exhibition at Plug Projects last year. Rickey M. had drawings included in the city’s Art in the Loop project. Several artists’ work have been exhibited in Ireland. 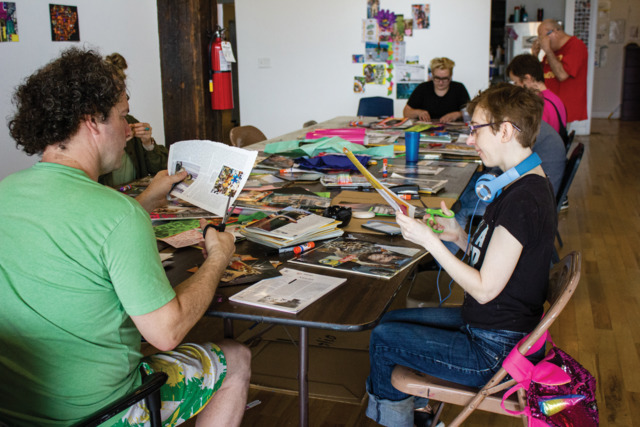 Conversely, Imagine That! exhibitions regularly feature guest artists from outside the studio.

“We’re an art studio for artists with developmental disabilities, but we want to project the fact that we are a gallery, these are artists, and we want to make sure they’re always integrated with the rest of the arts community as much as possible,” Youngbird says. In April, KCAI student Miranda Pratt held her senior thesis show here, and May’s exhibition featured local artist Alex Savage.

Some Imagine That! artists are coming straight out of high school, which makes the learning of interpersonal skills an essential part of their time at the studio. During my visits, I saw staff gently redirect and remind artists of boundaries and expectations. When an artist named Sean eagerly led me to the art storage room to show me the skateboard decks he’d painted, Youngbird reminded him not to barrel through the slower-walking artist ahead of us. Another artist, Brandon, tended to keep headphones on most of the day, but employed a variety of inside jokes to tease staff members. In order to encourage him to interact more with the other artists, the staff has implemented a rule that allows for teasing sessions only after he’s kept his headphones off for thirty minutes. From this, Brandon has created a series of artworks featuring the words “You better watch out or you’re going to have to socialize with your peers,” which became the title of May’s exhibition. (Brandon is also an accomplished musician. During my tour, I heard what I thought was music on a stereo. Then I realized it was Brandon playing the organ in the music room, one song after another, all from memory.)

Youngbird emphasizes that the relationships forged at Imagine That! are mutually beneficial for those with disabilities and the staff — many of whom are artists — alike.

“Everyone here is amazing, and everyone here is really empathetic, and everyone is kinda weird,” she says. “You have to be kinda weird to work here and navigate all the different personalities and situations. This is, like, the one place you get to be as weird as you want. No judgement.” Staff working nearby shout their assent.

“And for me personally, it’s been eye-opening for my own art and my own practice,” Youngbird continues. “Artists overanalyze and are very judgemental of themselves. It’s very freeing [to watch Imagine That! Artists]  just make what they want to make. They just do it. They don’t think about it. I think everyone should work with some artists with developmental disabilities at some point.”

Back at Community Collage Day, Johnny has finished a piece featuring a magazine photo of a man in the nude swinging a hatchet on an icy pond. With some staff collaboration, more elements are added to the collage: images of fishes swimming under the pond, a sweatshirt for the nude man, a pair of pants to float in the water. Johnny inks “‘You need to be careful with that!” over the image, with some staff assistance on spelling. Later, when I finished my collage, I stuck it on the gallery wall next to Johnny’s.