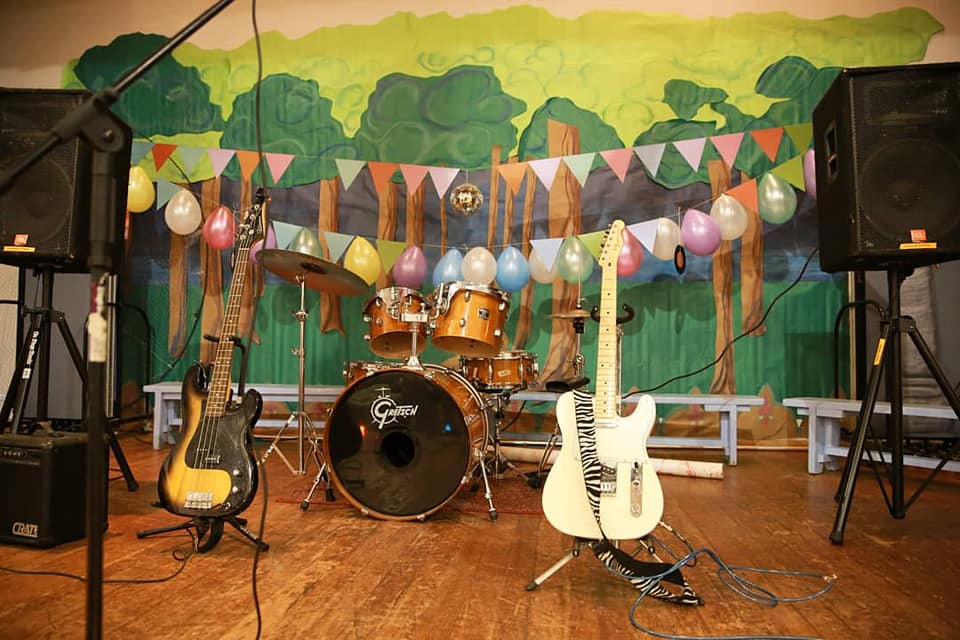 Founded in 2015 as Girls Rock Lawrence, and rebranded as Amplify Lawrence last year, the “week long summer camp in which girls and trans youth between ages 12-18 come together and form bands” has, over the course of the last six years, seen its numbers grow. As part of that growth came a realization that the term “girls” might not be fully inclusive, and a name change was “initiated by campers,” in the hopes “the new name will help future campers and volunteers feel welcome in [their] community.”

That’s part of the appeal for Alex Kimball-Williams, who performs under the name Bad Alaskan, and has volunteered with Amplify since the beginning. In addition to her music work, she’s a Health Equity Planner with Lawrence-Douglas County Public Health and involved with Black Lives Matter LFK, meaning that the music-meets-social-justice aspect of Amplify was already something with which she identified,

“I also do a lot with children in the area particularly among that age group–the middle school and up age group–and so I know that kind of predisposed me to being a good fit,” Kimball-Williams explains over Zoom. “I’m teaching them to step out of their comfort zones and to do improvisation and to be creative, to get in front of people, and to learn new things, and make mistakes–that helps people get set up to to work in social justice work because it’s a lot of those same tools and feelings involved and so, I appreciate that learning music and anything creative really is just such a great way to practice being involved in justice activities.”

There’s a certain sort of transformative experience to being involved with Amplify, explains camp director Katlyn Conroy, in a separate Zoom session a few days later.

“It’s pretty transformative seeing these really young people start camp very quiet and anxious,” Conroy says. “[Then], just within a week–within like a few days–gaining this extreme confidence. Because that’s the thing: it happens with every single camper, every single year. We don’t have a camper that starts out shy, ends shy. Everyone seems to find their voice. Everyone seems to find this hidden confidence or this hidden excitement and that is so transformative to experience. It really is like, you get addicted to it because it’s really inspiring.”

Last year, Amplify went virtual, like so many other things, meaning that all of the activities and instruction took place via Zoom. For the 2021 edition, it appears that the campers will have an opportunity to once again meet in person, albeit slightly modified from the five days of camp at the Lied Center, wherein dozens of young people would interact all day.

“We’re doing a hybrid,” says Conroy. The Amplify board polled parents and campers, and nobody was completely confident in doing 100% in-person, so they’re having Zoom classes throughout the day. “At the end of each day we have a small number of bands and they go out to the White Schoolhouse and they have socially distanced practice, so they get that in-person, but it’s safe.”

The White Schoolhouse, located just north of Lawrence at the intersection of 40 and 59 Highways, plays a large part in this year’s Amplify camp. Not only is the back porch of the building where the campers’ newly-formed bands will perform their newly-composed songs to friends and family, but it’s where the camp’s upcoming fundraising livestream was filmed a couple of weekends ago. 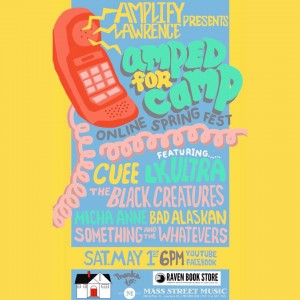 Called Amped for Camp, and taking place online on Saturday, May 1, the lineup is a stunning collection of the finest acts in the Kansas City and Lawrence area: Cuee, Something and the Whatevers, The Black Creatures, Micha Anne, LK Ultra, and Kimball-Williams’ own Bad Alaskan. I mention to Kimball-Williams that this seems like it’s absolutely the cream of the crop, in terms of talent, and she points out several aspects of the show which are worth noting for both casual music fans and potential campers alike.

“I’m really hoping that they get to see the diversity of music that’s coming out of Lawrence and surrounding areas,” says Kimball-Williams. “I think that we have a lot going on. It’s not necessarily like we are dominated by one musical genre or format, so I’m hoping that it really showcases that diversity.”

She’s excited for folks to see her Bad Alaskan performance, as it’s one of the only full-length performances she’s done on ukulele, but Kimball-Williams is excited for campers to see the different kinds of stage styles: “Some people will be very theatrical and doing different things on stage or even dancing and then others will be performing very differently and I think that’s very important for the campers to see, because a big part of the of the week is them performing at various times throughout it.”

Additionally, she says, it’s not just the diverse styles of music and performance on-hand–hip-hop, indie-rock, R&B, garage rock, and more–but the diversity of the performers themselves.

“I’ve enjoyed having shows with all of those people from [the] lineup,” Kimball-Williams says. “In the past, I’ve never accepted any shows where I’m the only person of color or the only woman on the lineup. I like that with Girls Rock/Amplify that I never have to ask that question: ‘Hey, just checking before I say yes to this opportunity. I have to check off these bullet points,’ but with that group, I never have to do that.”

Conroy is particularly excited about the Amped for Camp lineup, as well. While the camp director makes certain to emphasize that the stream is a fundraiser for the camp itself, she’s thrilled about the performers, including one act in particular.

“The last band of the night is LK Ultra, which is a band that was literally born from camp,” Conroy enthuses of the group, which originally formed as MK Ultra during the 2017 Girls Rock camp. “We tried to make it so not only are the campers getting to see what they would see at camp, as far as the artists that are represented at camp and the uniqueness of them but also, we’re ending the night with a band made of campers to show, ‘Hey, not only is this a fun experience and you get a lot of things out of this but there’s nothing saying you can’t continue to make music after this. This should start a fire in you and if that’s something you really want to do, we’re here to continue to support you after camp as we have with LK Ultra.’”

Amped for Camp, a fundraiser for Amplify Lawrence, takes place via Facebook Live and YouTube on Saturday, May 1, at 6 p.m., with Bad Alaskan, Cuee, Something and the Whatevers, The Black Creatures, Micha Anne, and LK Ultra. More details on the show can be found here.