Jurassic Quest offers family friendly fun for both tricera-tots and the young at heart. 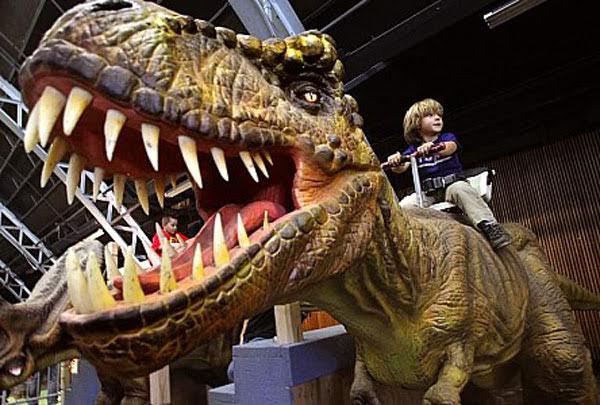 Jurassic Quest—North America’s largest interactive dinosaur exhibit—is ideal for children of all ages and millennial parents who extoll the virtues of the original Jurassic Park movies to those children. Chris Pratt is nice, but Jeff Goldbloom kids—Jeff Goldbloom!

COVID-19 relegated Jurassic Quest to a drive-through experience last year at Truman Sports Complex, but this year gets the full-scale indoor treatment at the American Royal Center in the West Bottoms.

A tour of the sprawling Jurassic Quest exhibit reveals a dino-carnival feel. There are 30 or so large-scale dinosaurs—some with scales, some with feathers or fur. There’s an arts and crafts area where kiddos can make prehistoric reptilian art from disposable plates and construction paper. A fossil dig site is just across the way where would-be paleontologists can unearth fossils. Real fossil casts are found about halfway through the tour.

Parents dino-might spend more than they expect to at Jurassic Quest. The exhibit is peppered with souvenir stands offering wares like a $30 T-rex-headed bubble wand or light-up sword along with a $40 solid rubber triceratops. For an upcharge, youngsters can play in an on-theme bounce house or ride a dinosaur.

You didn’t misread: you can ride a dinosaur.

My junior-journalist nephew Felix says this was his favorite part of Jurassic Quest. There are a couple of versions of cretaceous-creature rides. There are low to the ground stationary dinos with saddles for little ones. There are larger but still mostly stationary animatronic versions.

Then there’s the triceratops and ankylosaurus’ on wheels. Exhibit-goers hop in a saddle, sport a seatbelt, and can control the throttle on the antiquated armored reptiles.

Felix had one note on the ride: he wanted to ram other dinosaurs like a bumper car. Kids are weird. But not wrong, that does sound incredible.

Once inside Jurassic Quest, guests are greeted by a brachiosaurus that induces ooohs and awwws. Along the tour, there’s a scavenger hunt as you walk from prehistoric era to prehistoric era.

Of course, there is also an abundance of curated Instagram-worthy photo opportunities, including posing with T-rex and Megaladon.

At Jurassic Quest, the tour guides are known as “dino trainers,” who have a Ren-Fest-like zeal for keeping the illusion alive. Our dino trainer, “Brainy Beth,” was a very knowledgeable guide but swore her baby puppet dino “Tina” was a real-life dinosaur. We figured out how the puppet worked a couple of minutes later. There is also a raptor training experience towards the end of your scavenger hunt that channels the reboot Jurassic Park movies.

Tickets are available for March 4-6.