American Honey is a long, strange — and hugely affecting — trip 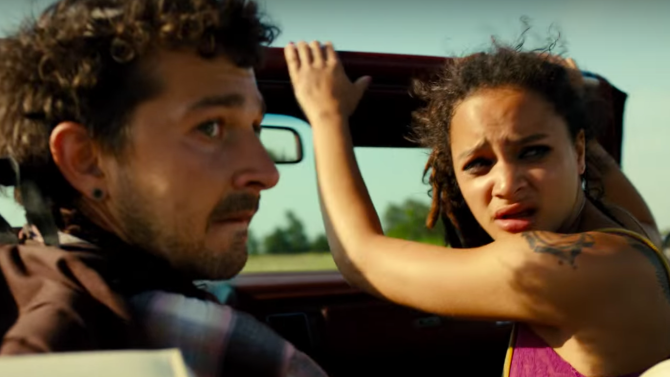 You know the movie you’ve just seen is powerful when it takes you a minute or two to adjust to reality once you leave the theater. Writer-director Andrea Arnold’s deeply immersive American Honey is one such experience; after I watched it last week, it took me awhile to find my legs.

American Honey isn’t just a movie to watch; it’s a movie to surrender to. Arnold conjures moments of poetry out of mundane settings — motel parking lots, convenience stores, upscale suburban neighborhoods (some of which will look familiar to you because Arnold shot a chunk of her movie around KC). Her portrait of impoverished youth living on the fringe is empathetic and virtually judgement-free, giving voice to a group that’s not often represented onscreen. Adding to its authenticity: Most of the cast members aren’t professional actors.

American Honey is an intimate portrait of a resourceful 18-year-old named Star (a magnetic Sasha Lane, in her first role), living in squalor in Oklahoma. We meet Star dumpster-diving with her step-siblings in the opening scenes, and then never leave her side for 142 minutes. Cinematographer Robbie Ryan embeds us in Star’s POV, shooting a handheld camera over Lane’s shoulder or right next to her for most of the film.

A chance encounter with a van full of teenagers on the road entices Star to follow them into a supermarket, where they dance and clown and attract security guards. The confidence of these youths intoxicates Star, and she’s especially attracted to the oldest and best-dressed of the bunch, a young man named Jake (Shia LaBeouf). He offers her a job with them, traveling cross-country, selling magazines.

It sounds like a leery enterprise, and our suspicions are confirmed when we meet Star’s new boss: a hard-partying, bikini-clad young woman named Krystal (Riley Keough), who drives on ahead of the teens in her own car. Now Star is on the road to KC and other Midwestern cities, buoyed by the acceptance and camaraderie of peers her own age. They are adrift in society — but adrift together, and unafraid to admit it.

As in her previous work (the similarly naturalistic Fish Tank and Wuthering Heights), Arnold has shot American Honey in the “square” 4:3 aspect ratio, a choice that makes the crowded van seem even more claustrophobic. Yet in the many outdoor scenes, her frame manages to feel expansive and full of possibility — even as its limits keep the film from romanticizing the landscape. Malickian panoramas of natural beauty aren’t the point.

Instead, Arnold embeds us in Star’s experience, and the movie’s stirring beauty comes from watching her come into her own. (Personhood, you could call it.) Naïve and prone to keeping her feelings to herself, she is launched into an orbit well outside her comfort zone, and we watch her make rash decisions, discover her innate connection to the natural world, and at last develop an idea of what her future might hold. The most intensely felt aspect of this transition is the romance and physical relationship she develops with Jake, which leads her into bliss, yes, but also toward danger.

The rhythm of American Honey takes a while to get used to. It’s full of pop music and overlapping dialogue. The dialogue mostly makes do without wit while providing subtle situational humor. (The one truly laugh-out-loud moment was filmed in Mission Hills and features terrific performances by local actors Laura Kirk and Kaylin Mally.) Arnold’s script doesn’t follow traditional screenplay rules, and that’s to the good. She skips the armchair psychology and the simplistic character motivations, favoring an authentically lived-in style that recalls the Italian neorealists and the contemporary films of the Dardenne brothers. Fair warning, then, that if you found Boyhood or The Tree of Life too slow, the 160-minute American Honey may similarly frustrate you.

Some scenes are repetitive, but nothing feels less than crucial to the story, to establishing these characters. Their freedom on the open road — their existence in and around the van, their search for places to stay and people to con — is a ramble, and so American Honey rambles, too. As it should. The movie’s cumulative effect is what makes it such a stunning piece of work.