American Heartland, Egads and the Barn Players treat us right 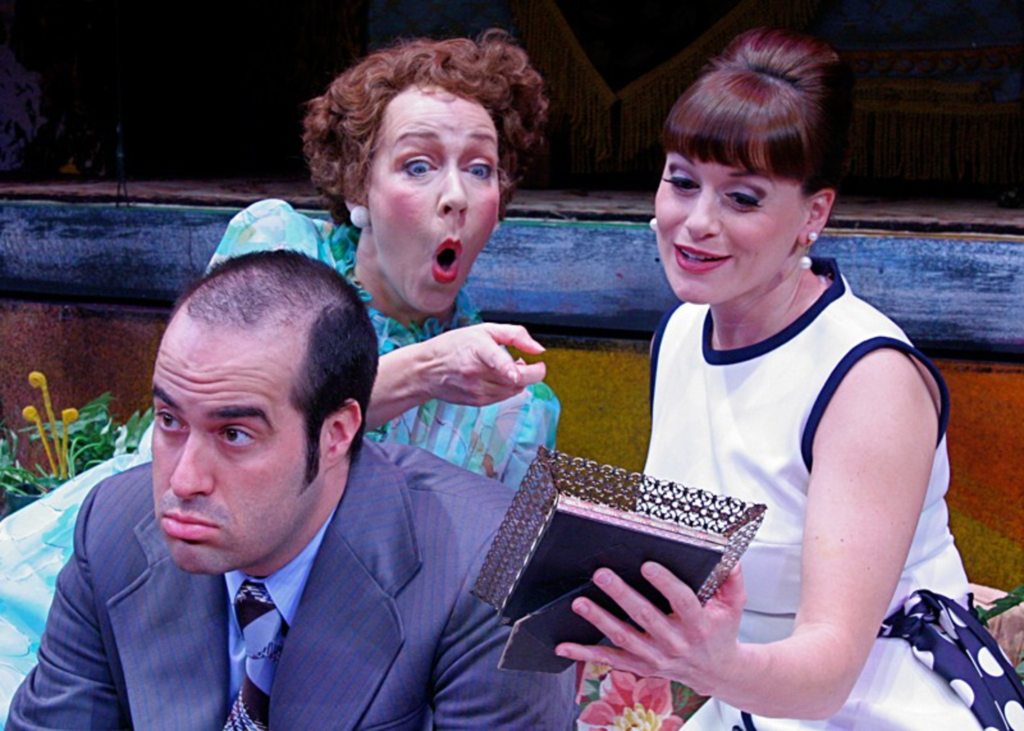 With his Inspector Clouseau mug and snappy delivery, Tim Scott was born to play comic detectives. The opening words are his in the American Heartland Theatre’s No Way to Treat a Lady, and at first I wasn’t sure whether they were being spoken or sung, so natural and intelligent is Scott’s phrasing. His voice might waver on ballads, but its flexibility is made for Douglas Cohen’s conversational lyrics. His ability to portray faceted morality can read as insincerity in earnest roles, but it’s perfect for Morris Brummel, the detective who needs the killer as much as the killer needs him.

Jon Daugharthy’s Kit Gill is as air-puffed as a pompous psycho lady-killer should be. His camp delivery hilariously lampoons big, self-important musicals such as Phantom of the Opera. The excellent Lauren Braton is fetching as Brummel’s sweetheart, Sarah, who reminds him that neither murder nor love should be trifled with. When Sarah puts her well-bred charm up against the yenta bullishness of Morris’ mother, in a priceless comic mano a mano with Cathy Barnett, Braton gives as good as she gets.

Barnett plays all the victims in this murder-mystery musical, but she’s the one who kills. And as Flora, the mother of all Jewish mothers, Barnett plays the type with such scrupulous wackiness, she makes the ones in Woody Allen movies look like imitations.

Unfortunately, the excellent cast, as well as William J. Christie’s hardworking set dressing and Georgianna Londre Buchanan’s droll ’70s costumes, have to work against Jason Coale’s hideously jumbled background of re-created midcentury paintings. Poor Daugharthy, in particular, can sometimes barely be heard for the abstract-expressionist and cubist cacophony exploding behind him. One guesses that a Manhattan skyline was rejected as being too straightforward or something, but it sure would have made more sense.

Paul Hough’s direction makes up for it. His energetic staging turns the AHT’s shallow proscenium and apron into assets, with logical, lively scene changes and a turntable exploited for comic possibilities. This superb production elevates funny but forgettable material to an evening of breezy theatrical entertainment.

Producer-director Steven Eubank wanted a string section for his Egads production of William Finn’s In Trousers. Thank Zeus, he didn’t get one. As it is, his fine six-piece ensemble and terrific four-person cast blast the living daylights out of the Off Center Theatre, deploying about three times the firepower called for per number.

Finn is that rare genius who’s equally gifted at music and lyrics, and this musical, while thin on story and character, is packed end to end with gorgeously crafted songs. Sadly, that became a source of regret when my ears suffered nonstop assault. Though several quiet numbers offered reprieve, the three phenomenal female characters sang that night as though their lives depended on being heard in every corner of the Crown Center complex. They belted even when backing up one another. The volume, plus a sound mix that squealed, made it hard to distinguish the lyrics — a damn shame, given that Finn’s words are almost as clever as Stephen Sondheim’s (with a freewheeling psychology that’s all his own).

The good news is that the music is fantastic. I’m not sure Katie Karel is capable of holding back vocally, even if asked, but she sure can sell a song. Her character is the script’s least developed, but she plays it with amusing inventiveness just the same. Molly Denninghoff very nearly takes the night with “I’m Breaking Down.” Jared Hill is passive but tuneful as Marvin. And newcomer Shelby Floyd is one to watch, with a voice of fireworks and verve.

Eubank obviously dreams of a venue roughly the size of Starlight. With his talent and ambition, he just might get it.

Barn Players launches a new season with a polished Evita. The show belongs to John Cleary as Che, in a performance that is emotionally grounded and beautifully sung. Eryn Hamer looks the title part, but her voice, though sweet, needs more range and stamina for this demanding role. Ken Schmidt’s Juan Perón lacks authority starting out but grows into a moving “She Is a Diamond.”

Sharp direction by Phil Kinen, a handsome set by Alex Coppaken, and an effective ensemble made for an enjoyable show. I was struck again by the clunkiness of Tim Rice’s lyrics, but I still left humming the seduction number “Surprisingly Good.”