American Heartland and Quality Hill turn up the romance 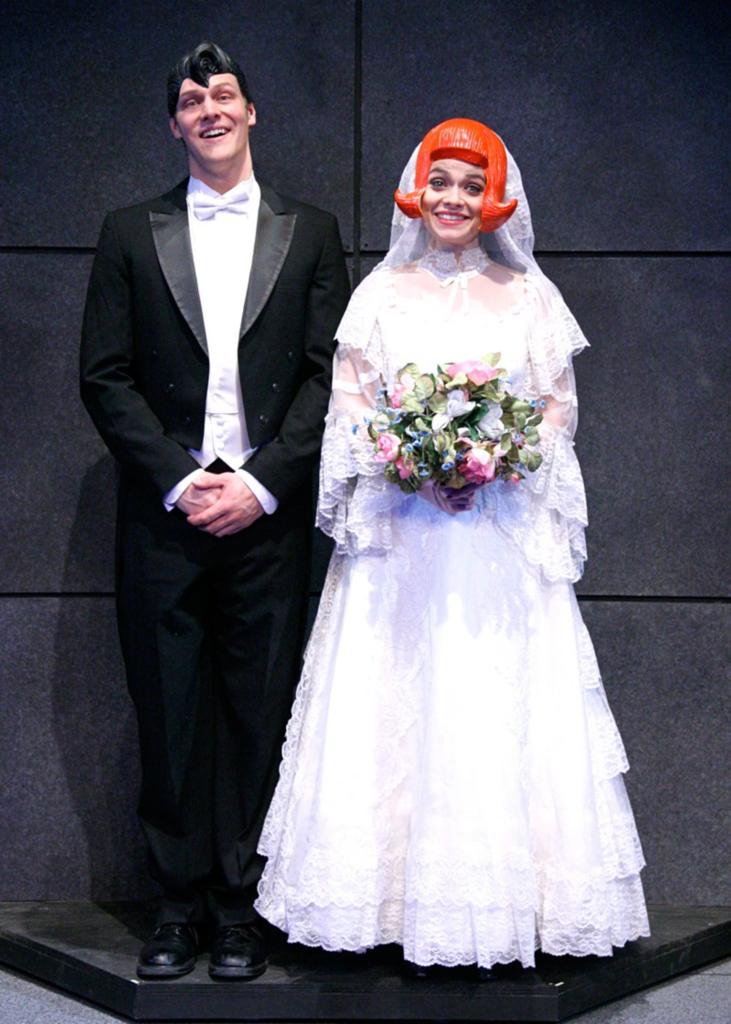 I’m a fool for love, but I’m a cynic for love stories, especially those involving such tired tropes as bad blind dates, decreasingly selective dating criteria, and cataclysmically bad wedding-reception dancing. These jokes, the material of a thousand bad stand-up routines, are so old that they’re like Metamucil sprinkled on All-Bran.

Nevertheless, even my icy heart couldn’t help but be defrosted a bit by the leaping comic sparks generated by Jessalyn Kincaid and Chase Ashurst in the American Heartland Theatre’s reprise of Maybe Baby, It’s You, not to mention the raging bonfire of the audience’s hooting and hollering.

The script by Charlie ­Shanian and Shari Simpson speed-dates its way through 11 romantic-comedy sketches that traffic in equal-opportunity man bashing and woman grousing — hobbies that, like scrapbooking and fantasy-sports-team management, are truly American. In France, it’s vive la différence; in America it’s the battle of the sexes.

Beaming with blissful anticipation, a man and a woman intone their wish lists of traits for that Ideal Other. The joke’s on them. She of the Sports Illustrated swimsuit model and he of the “realizes male monogamy is unnatural” plunge precipitously to “Sears model” and “lets me look at the girdle ads in the Kmart circular,” and these in turn crash past “would be good if she had a head” before landing with a sickening thud on simply “breathing.” As show starters go, this one sets a tone of resignation and desperation, taking as tacit fact that such are the natural byproducts of the search for romance — possibly of life itself.

Thus, “Dream Lovers” takes the idea of soul mates to absurdist extremes, while “Into the Fire” has a hard-boiled gumshoe and his redhead so reflexively swapping corny quips and decidedly sub-Raymond Chandler similes that it’s impossible for them to carry on an actual conversation. When passion dwindles (“The honeymoon was as short as an albino’s day at the beach”), the duo must learn that “communication is more than a really easy college major till you figure out what you really want to study.”

As for that blind date, it’s with Medea, the raging, compulsively homicidal priestess of the witch goddess Hecate. She describes herself, with droll understatement, as “recently out of a somewhat difficult relationship.”

Paul Hough’s snappy direction means no dull moments here, but the heat comes from Kincaid and Ashurst, the hardworking actors who sprint through all two-dozen parts.

With her knowing eyes and sardonic grin, Kincaid excels at playing wisecracking broads, such as middle-schooler Audrey, an adenoidal, hyperarticulate dissector of hapless bio-lab partners, and Lizette, the tough dame who finds that marriage noir is no thriller.

AHT newcomer Ashurst is a worthy partner to Kincaid. His deranged cheer, extreme facial animation and rubbery physicality recall the young Jim Carrey. Ashurst burns down the house as a modest pediatric brain surgeon (“It’s not that hard — their brains are little”) who unwittingly repels beauties with his spasmodically enthusiastic dance style.

For reasons unfathomable, these romances take place against a dour granite surrounding that resembles a display at some discount tile warehouse. What’s more, hideous iterations of the Comic Sans font keep flashing onto the back wall: the title of the play and of each vignette in Comic Sans vertical, Comic Sans italic, Comic Sans bold, Comic Sans very big and Comic Sans colossal. Maybe the design budget went entirely to Hough’s many clever costumes and Donna Miller’s witty sound effects. Or maybe the set is meant to show that love isn’t always pretty. Whatever the case, it didn’t bother my companion, who wept with laughter during the entire show. I had to pick her off the floor at curtain call and drag her to the car. She went right home and bought tickets online so she could return with her husband on the weekend.

If your sweetheart or parent is a fan of torch songs or Tin Pan Alley, you could do worse than steer that special person to Quality Hill Playhouse, where the debonair J. Kent Barnhart holds court at the grand piano on Blues in the Night, a tribute to the lyricist Johnny Mercer.

A generous selection of Mercer’s moody, romantic songs, including “One for My Baby,” “Skylark” and “Moon River,” are pleasantly crooned by Lauren Braton, Tim Scott and Melinda MacDonald, with the top-notch Brian Wilson (bass) and Julian Goff (drums) providing shimmer and thrum.

But the real reason to go is Barnhart himself, a born showman and raconteur who spins enchanting anecdotes about the lyricists, composers and vocalists of the Great American Songbook. He’s also a snazzy jazz stylist with swing and panache to spare. His singers’ performances, though competent, feel all the more dutiful by comparison and never electrify. I’d love to see Barnhart fly solo in a sparkly hotel lounge, joined for occasional numbers by a scorching chanteuse and backed only by his rhythm section, with the tinkling of ice cubes in fancy drinks and the appreciative murmur of the crowd. More Bobby Short at the Carlyle than the current neat and muted playhouse.

Both shows keep the love alive into mid-February, thawing you out in plenty of time for Valentine’s Day.