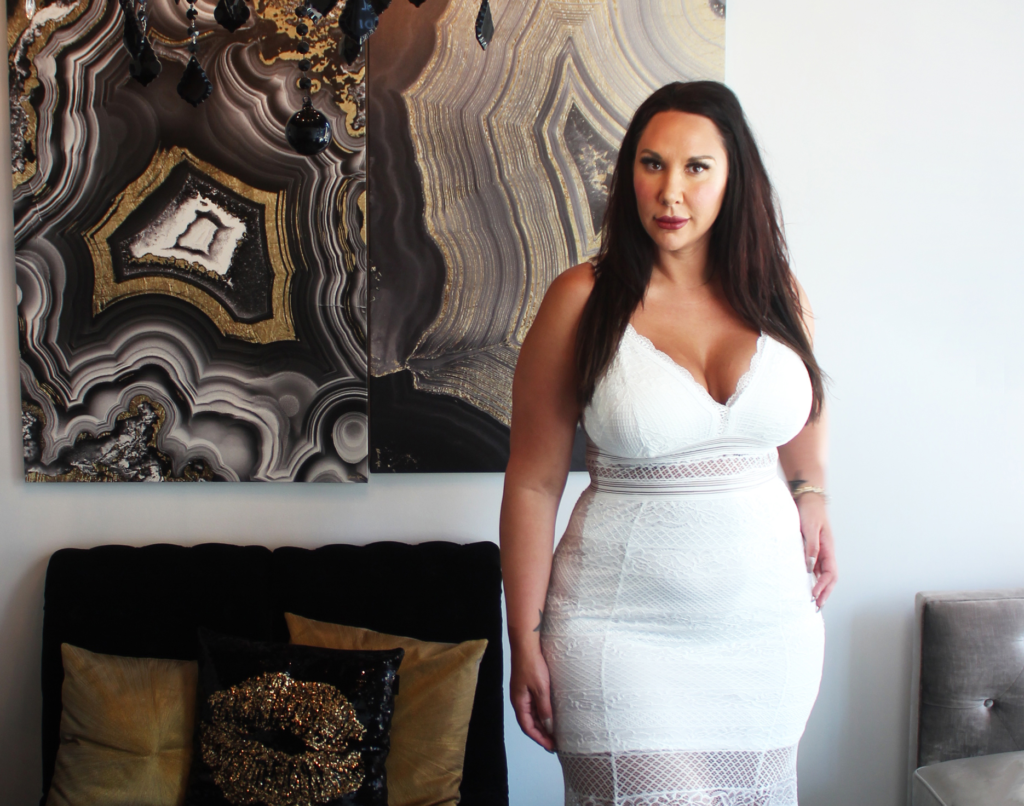 When Dr. Amber Botros walks the runway, it’s mesmerizing. She’s six feet tall and curvy, with a piercing gaze. You might have seen her at the West 18th Street Fashion Show, at the past few Kansas City Fashion Week runways, or on Instagram as @ambercurvemodel, where she expresses to her more 100,000 followers that sexy doesn’t have a size limit. Botros also owns and operates Plaza Medical Spa, where she’s the lead physician.

In addition to a handful of upcoming events — Miami and Philadelphia Curve Week, NYC Curvy Con — Dr. Botros attended The Pitch’s Fashion for a Fraction earlier this month as a panelist on body positivity. We stopped by her office the other day and had a chat.

Who did you want to be when you grew up? I’ve never really been focused on becoming someone else. When I was in high school, I was interested in going to medical school and pursing primary care. I was never interested in modeling.

Your drink: Malibu and diet

When did you start modeling? I started modeling approximately three years ago when my dear friend and business neighbor Nataliya Meyer, of Lucia’s Sarto [clothing store], asked me to model for her. I modeled for a few seasons of KC Fashion Week, although I was still more focused on my career as a physician and Medical Spa owner. A year ago I modeled in a rooftop lookbook for Honey’s Child Boutique in St. Louis. One of the photos went “viral,” which piqued my interest in the industry, turning this current hobby of modeling into something so much more.

You are a med spa doctor, which often includes procedures that can change appearance, but you also promote loving the skin you’re in. How do those two ideas work together? Our goal should be aging gracefully and feeling the most comfortable and confident in our skin that we can. Small procedures that do not change our appearance, but make us the most relaxed, beautiful, timeless version of ourselves is a great goal.

What’s your biggest struggle right now? Deciding how best to merge my business as a beauty doctor and my social media as a model/influencer. I wholeheartedly believe that I can make the greatest impact by merging the two, but I want to do so as seamlessly as possible. My thought is to start with skincare and beauty tutorials that I can post on social media sites as well my professional website. I’m working on becoming #DrAmberCurveModel.

What is the last thing you laughed at? Myself eternally laughing at myself.

When did you become interested in body positivity as a message? It was at my first modeling experience at KC Fashion Week. I realized there was a lack of size inclusivity in our metro area. I immediately received positive feedback from so many models and designers that were happy to see a plus-size model — and even more so as a professional and businesswomen in the plus-size industry.

What gets you on your soapbox? When people I love are treated poorly. I have such a difficult time understanding why people are so cruel, especially on social media. I have no problem taking negativity myself, but those who are near and dear to me — I just can’t stand it. All the negative comments that I receive I like to address and turn into a learning experience. My favorite comment was on a runway photo of mine: “Did they need to reinforce the stage?” I worry about young, impressionable women seeing these negative comments and it scaring their confidence. I will often add screenshots of the negative comments to my story and try to appropriately address them, turning a negative into a positive. Also, to show young women that they don’t need to be silent. We are conditioned as plus-size women to stay silent, and that is not OK.

What makes Kansas City special? It’s the biggest small town. No six degrees of separation here — essentially everyone is connected by one degree. I’m so blessed to have had such strong support from my community where I was able to build a small business so quickly.

Why is it important for there to be better representation of plus-size models in the KC modeling community? The average woman is a size 16 and wants to see herself represented in fashion. Women want to see how they are going to look in clothing, and it’s difficult to purchase clothing from a designer when they only use size 0 models.

The best advice you ever got: Never give up. With hard work and determination, everything in life is possible.

How do you use social media to promote body positivity? Growing up, I never had positive plus-size role models. I was always told that my legs were too thick to wear short skirts, it was unsightly to wear shorts, my body was too sexy for short dresses. Women who looked like me were not in magazines; we had supermodels like Kate Moss and Cindy Crawford who were considered beautiful per societal standards. I want young women who are not naturally thin to see my photos and know that they are also beautiful, relevant in society, and can pursue all that they want in life, whether that means becoming a doctor or a model or both.