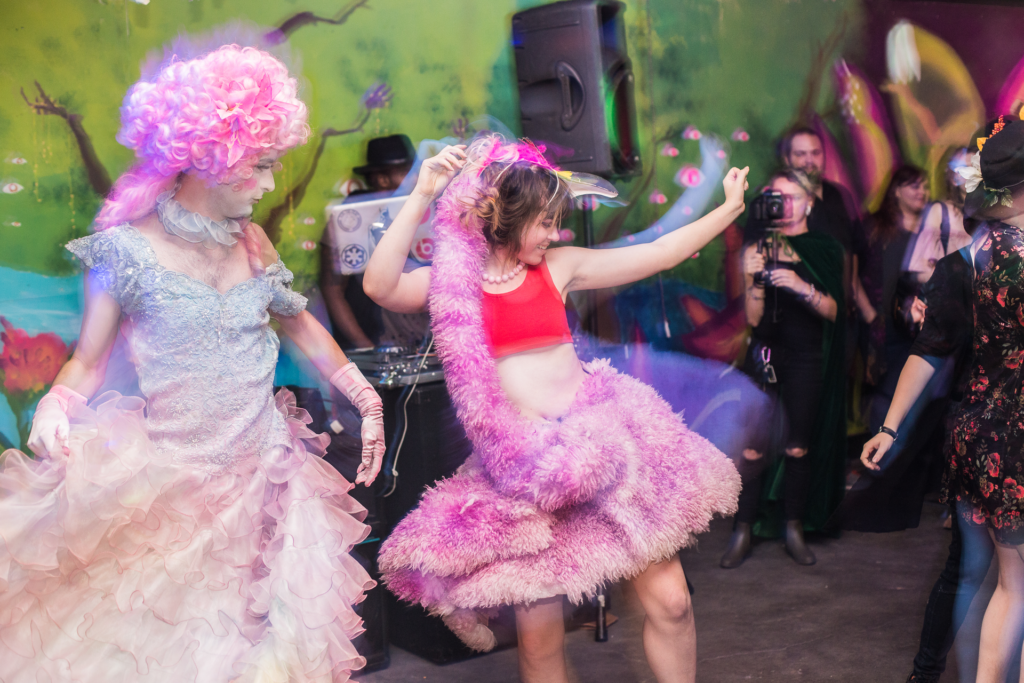 From behind the warehouse door, you could see the green glow. It was drawing us toward it like bugs to a porch light. Beyond, we expected something like a bug’s paradise, an unexpected verdant terrain in the city.

Past the door and through a vine partition was the night’s version of an urban Eden: Alter Art Space, where I’d RSVP’d to an event themed “Garden.” I paid my $5 cover and passed into an environment significantly different from the warehouse district outside. As my eyes adjusted to the dim light, I could make out a pillow-stuffed lounge area, wicker patio furniture and a large pink earthworm on an AstroTurf lawn. I’d brought a friend with me, having correctly predicted I’d be among the oldest people here. (I’m not yet 30.) We ducked into a tiny house set up on the corner of the lawn. The floor was lined with pillows and blankets, conducive to sleep or opium ingestion. We sat down and I wondered again: What the hell is Alter Art Space?

“It’s not a party. It’s a fun, interactive installation. We share the space with Awful House, an experimental musical showcase run by a small group of people, and we share many of their ideas about how a space should function.” 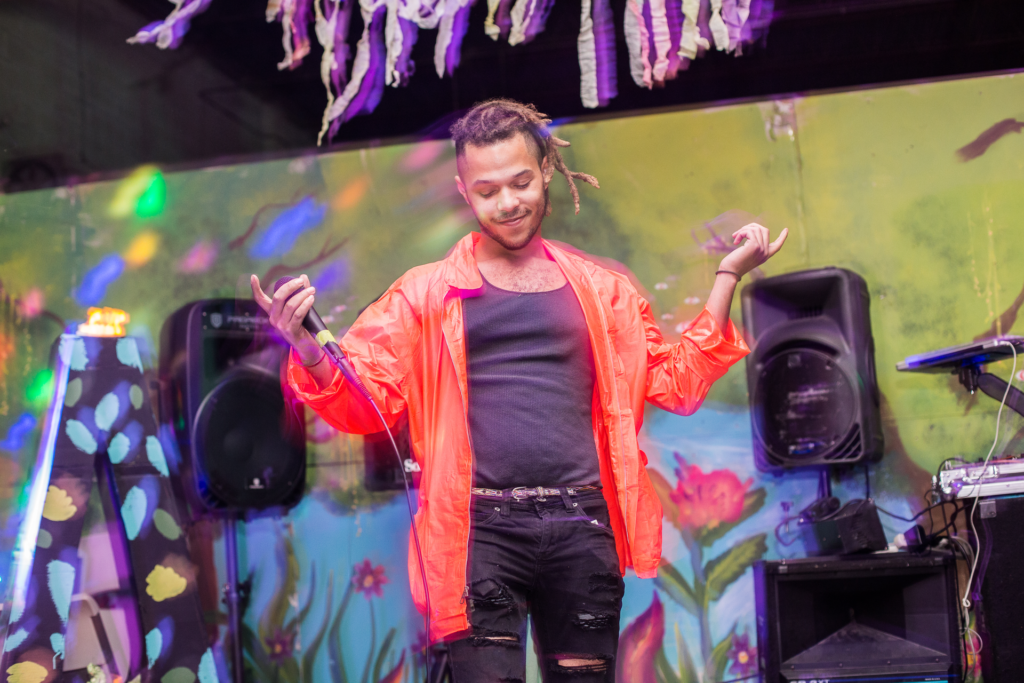 That thumbnail explanation comes from Boi Boy, one of the main organizers and a self-described “Alter’s Mommy,” who approaches the project as a New York club kid would have embarked on a DIY endeavor circa 2002: The personality is the driving force behind every concept.

Boi Boy hadn’t really answered my question, but now I could see that nobody else here appeared to know where they were or why they’d come, either — or to much care. People’s expressions indicated instead a collective thrill of shedding daytime identities for something liminal and anonymous. This thrown-together Eden was refashioning itself, minute by minute, into a coolly hedonistic little Gomorrah.

Every few years, something like this happens to performance art in Kansas City. The urge to conjure some subterranean happening strikes a handful of people, and there follows a seance to summon older, better parties. Sometimes what appears from the mist is closer to a long-dead great aunt, perfume heavy, lipstick smeared, gaudy rings slipping off fortune-teller fingers. A decade ago, the scene was loudly dominated by Whoop Dee Doo, the hard-to-classify conjugation of public-access children’s TV hour and grown-up costume party. But since that outfit dissolved (everyone grew up and moved to New York or Los Angeles), efforts to fill the vacancy have been sporadic at best. Boi Boy and fellow Mommy Bo Hubbard have emerged as clear successors to the Whoop with their monthly underground art installation–slash–dance party. 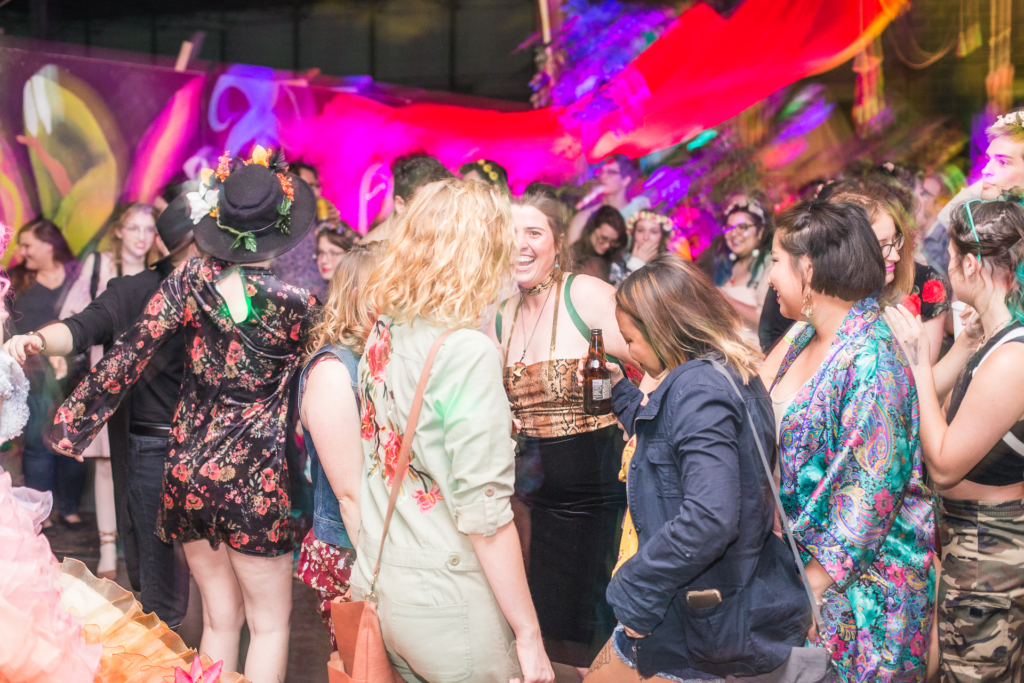 “We play to your FOMO [fear of missing out] factor,” Boi Boy tells me. “If an event is only up for one night, we can get as many people in there as possible.”

The mommies’ challenge, they say, is to create opulent-feeling and immersive settings on a post–art school budget. Found, donated or salvaged materials make up the majority of props in any given installation, the upside of which means that everything you see is meant to be handled. Other props are alive. Volunteers serve as human statues (safely off the dance floor), holding their disciplined poses for long stretches while musical guests and drag shows unfold around them. 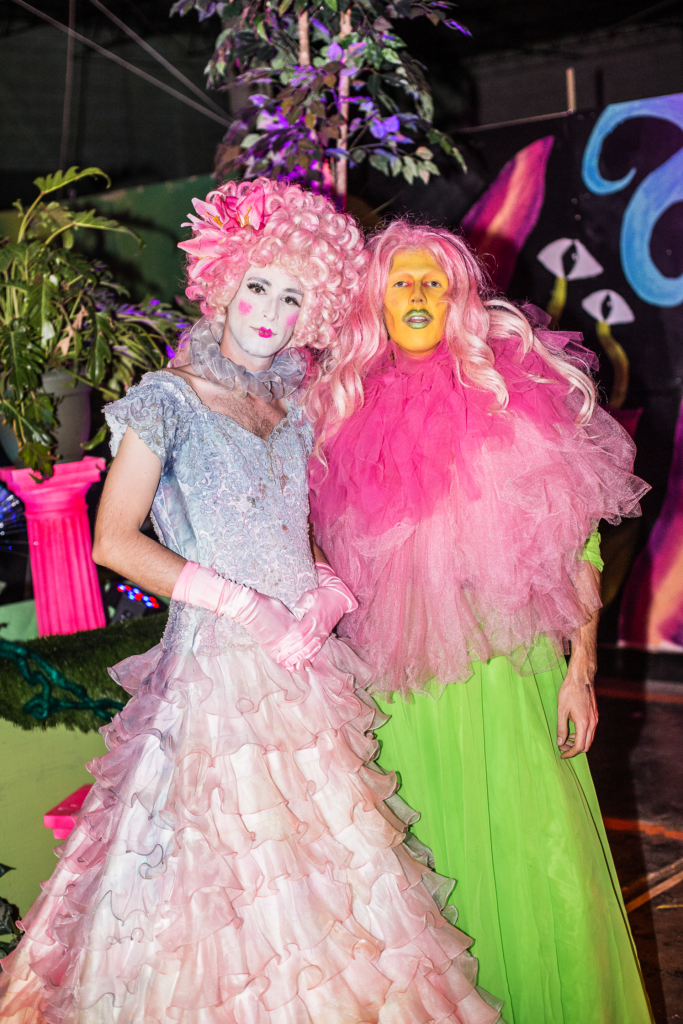 Guests are encouraged to dress according to the theme of the night. As you’d expect, “Birth” yielded some eye-popping costumes. (It may sound as though Alter’s themes are following a biblical arc, but November promises something closer to a Western hoedown.) For “Garden,” the crowd is also impressively adorned, the organizers having made themselves the centerpieces. Boi Boy has donned a massive collar of pink tulle to complement a face painted yellow, and Bo’s pastel Marie Antoinette gown matches a cotton candy–pink wig. All night, the two artists haul their skirts around the room and keep the energy of the project humming.

At one point, I see a young woman dressed in a flamingo costume that would turn Björk’s head.

“Ava is our mascot: the Funmingo,” Boi tells me. “Ava is inspired by Clara the Carefree Chicken, an iconic club kid from the New York scene.

“Flamingoes are the most underrated mascot,” Boi adds. “They can drink arsenic! They get frozen in the tundra, go to sleep, then later, when the ice melts, they just walk off!” 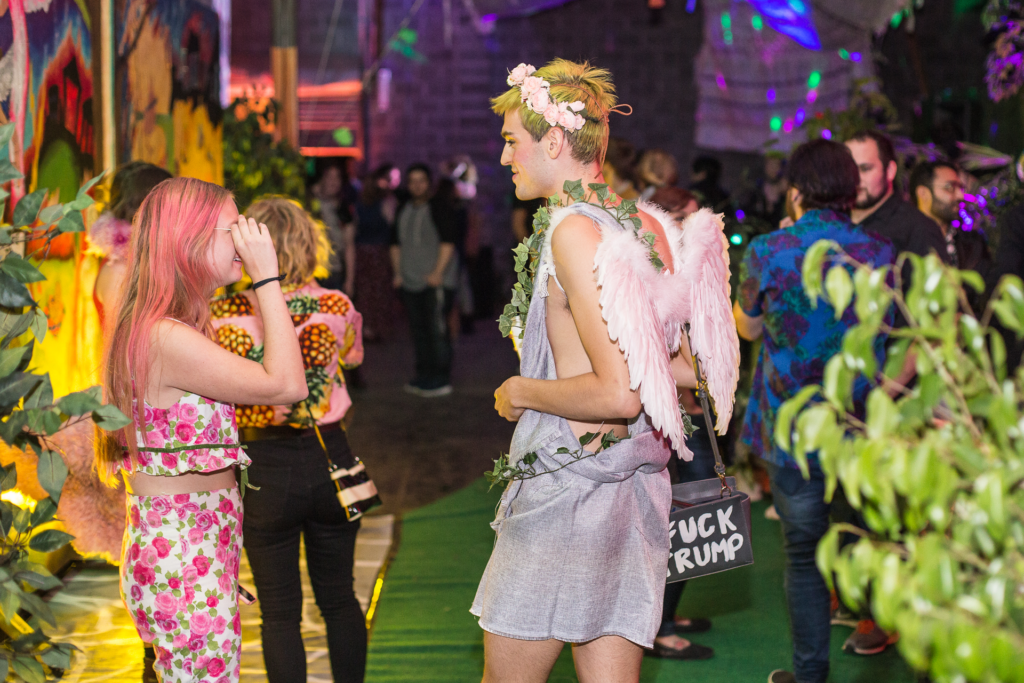 The Funmingo is one of Alter’s only consistencies from one night to the next. “We’re trying to create as many repetitive expectations as we can with Alter,” Bo says. “Because the entire installation changes every month and there is so much instability, we want small things people can expect every time.” This is the problem they’ve given themselves, the challenge of collecting and displaying a mixture of the familiar and the unseen, and of finding artists to contribute and volunteers to participate. These elements aren’t all performative, but each is necessary to this particular performance art.

But that’s part of why I’m here tonight, and maybe everyone around me has been similarly motivated: We’re all tired lately.

We deserve a break from the news, the endless tumbling dominoes of political impasse and embarrassment, the ripping of the social fabric from our shoulders. We’ve been overthinking everything else, and feeling too much besides. Why solve a puzzle on the Astroturf in an old building, in the low light and the interactive din? That would defeat the purpose of Alter.

Thanks to a couple of big imaginations, there’s a small monthly suspension of real-world horror available. I tune out my own thoughts and listen: The PA is being tested on the dance floor, and there’s a consistent pulse of laughter nearby. I walked into Alter Art Space with too many questions, and what I see now is a solution: Boy Boi and Bo have set up a way for socially conscious people to recover some of their wild side — play with art, dance in extravagant costumes, slip briefly into the alternate reality that hovers between daytime responsibility and theatrical self-indulgence — without inviting judgment. In a fake treehouse on a fake lawn, I ease back into my pillow and feel really relaxed.