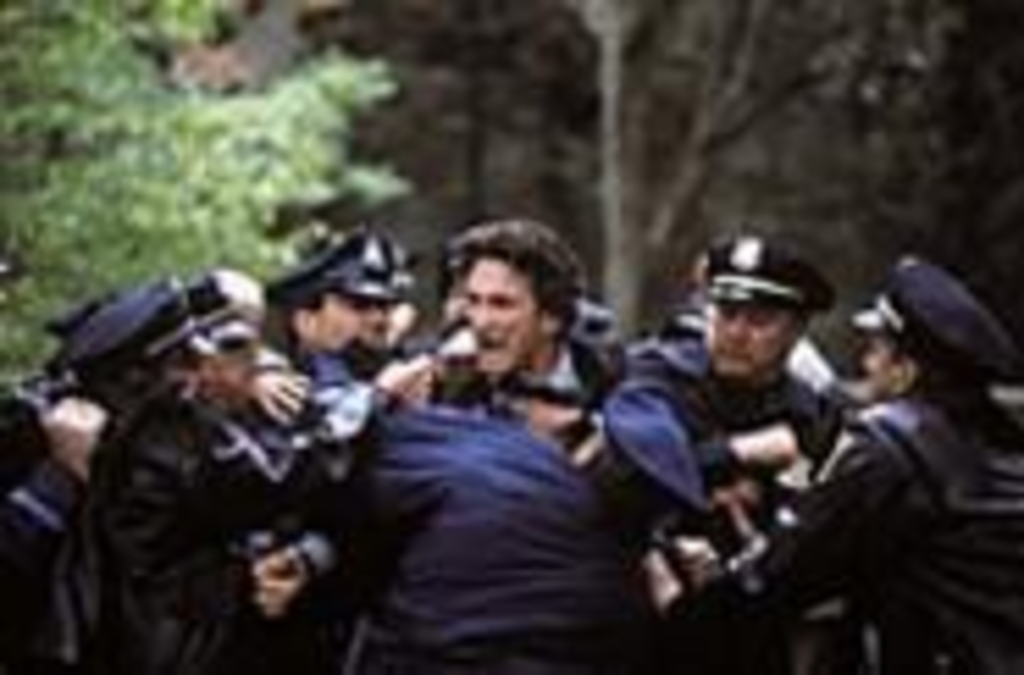 Dave, a man who’s barely there, lulls his son to sleep with stories of a boy lost in the woods who escapes from wolves. Dave (Tim Robbins) was once that little boy, and the wolves were the two men posing as cops who put him in their car, threw him in a hole and molested him for days. The abduction still haunts Dave and the two friends, Sean and Jimmy, who saw it happen. As grown-up Jimmy (Sean Penn) asks Sean (Kevin Bacon), “What if you or I had gotten in that car instead of Dave?”

It’s appropriate that the latest film from Clint Eastwood is titled Mystic River. The movie, screenwriter Brian Helgeland’s adaptation of Dennis Lehane’s novel, sheds enough tears to fill a canal. On the surface, it plays like an episode of Law & Order written by William Shakespeare, but that’s too glib a pronouncement for a deeply felt movie about rage and retribution that will stick with you like a bad dream. It’s not only a mystery but also a meditation on grief and loss — of life, as a young girl’s killer is sought, and of innocence.

Dave, Jimmy and Sean live in the same working-class Boston neighborhood, but their friendship was damaged beyond repair the day Dave was taken. Jimmy became a criminal and served time for robbery. Now a respectable citizen, he owns a convenience store with his second wife, Annabeth (Laura Linney). Sean is a homicide investigator whose estranged wife calls him on the phone but says nothing. And Dave is a phantom, husband to a devoted wife, Celeste (Marcia Gay Harden), and father to a precious son (Cayden Boyd), but a nonentity who carries himself like someone afraid that he’ll be attacked again at any moment. “I can’t trust my mind anymore,” he tells Celeste, who stops trusting him the night he comes home covered in blood — the same night Jimmy’s nineteen-year-old daughter, Katie (Emily Rossum), is found mutilated in a park.

We’re meant to think that Dave might have had something to do with Emily’s murder; certainly it’s the conclusion Jimmy draws, and it’s what Sean’s partner, Whitey (Laurence Fishburne), believes. But it’s not that simple, because along the Mystic River, everyone is guilty of something.

Eastwood, after killing time the last decade with highbrow Travel Channel gruel (The Bridges of Madison County, Midnight in the Garden of Good and Evil) and geriatric thrillers (True Crime, Blood Work), is back in familiar territory — in the cemetery, where the dead remind the living that no one gets out alive. It has been suggested that Eastwood has spent the second act of his career apologizing for the first, showing the price of violence after years spent plugging bad guys with .44-caliber bullets and glib catchphrases. But his work, from the Sergio Leone Westerns through Unforgiven and now this, should be taken as a whole: Never has an actor or director appeared to take so little pleasure in taking so many lives.

The performances are uniformly remarkable — Robbins and Harden are especially strong as a loving couple in the midst of a slow decay — but none more so than the one given by Penn, whose character treats sorrow and rage as though they were the same blinding emotion. Jimmy wants to be a good guy who does the right thing, but he’s too entrenched in bad yesterdays to escape his nature. The scene in which he forces his way through dozens of cops to find his daughter’s corpse is devastating — a sustained and piercing howl that echoes all the way down Mystic River.