All in the translation 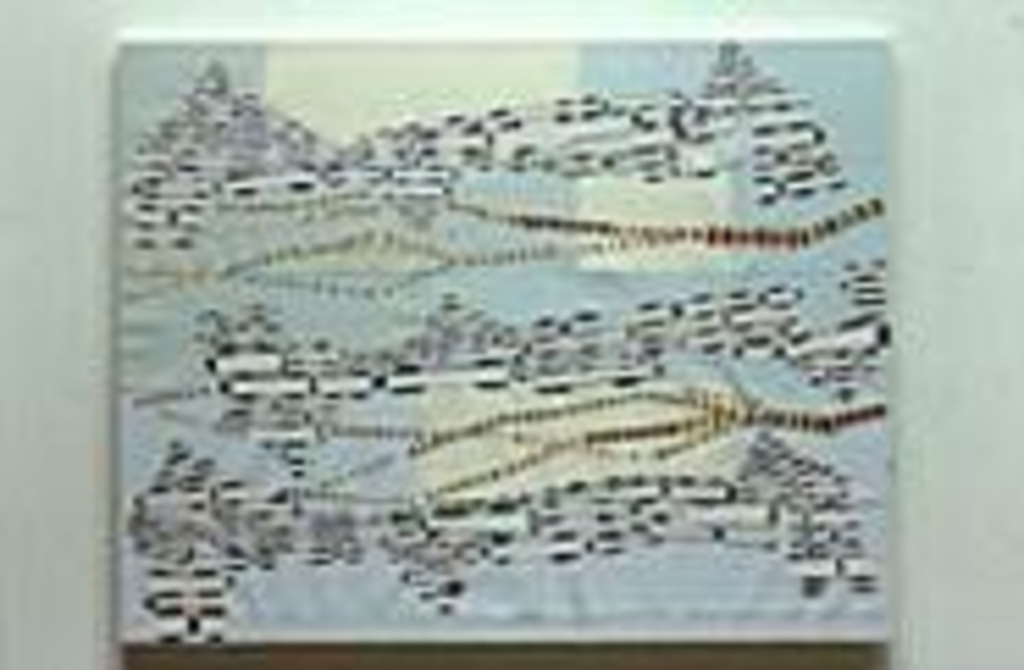 Three artists at Joseph Nease Gallery share a penchant for unique materials. Instead of paint, James Brinsfield uses tape, paper, and markers on his large-scale canvases. Rachel Hayes sews together patches of polyester fabric and vinyl. And John Torreano constructs palm-size balls out of wood, acrylic gems, and krylon paint.

In his statement, Brinsfield explains that his materials “aren’t a surrogate for paint.” Instead, according to the artist, they’re a practical means to “relay visual information.” He wants the viewer to read the canvas “the same way one would read the printed page, a graph, or a map.” Combining this practical, diagrammatic approach with the intrinsic concerns of abstraction and using music as a point of departure, Brinsfield seeks to translate aural sensations into a visual language.

The attempt to translate a sentence from one language to another inevitably results in misunderstandings. The same is true here. At their best, Brinsfield’s forms flow vertically across the surface. In “Streambox” and “Tableau,” a grid of patched-together sheets of cream and light-blue paper provides the first layer, on top of which the artist applied interwoven sections of streaming black-and-white forms and thin strips of color. The resulting imagery has something in common with music, but it also alludes to other beautiful complexities: cellular growth, plate tectonics, and transportation networks come to mind.

The pieces laden with overt references to music, on the other hand, seem too cerebral and contrived. The stark black forms in “Overdub” and “Blue Milk” interrupt the ebb and flow that makes Brinsfield’s work exciting to look at. When a German tourist says “Goodbye,” he’s unaware that there may be more appropriate sayings, such as “See you later.” Like the tourist’s vocabulary, these two pieces lack nuance: Something gets lost in the translation.

Rachel Hayes’ material exploration resulted in Constant Chameleon, an installation concerned with the hide-and-seek dynamics of camouflage. The largest of Hayes’ three panels, draped along two adjacent walls like a curtain, dominates Nease’s rear space. This panel’s outer layer — alternating bands of sheer yellow and clear vinyl — mediate one’s perception of the layer beneath, a patchwork of colorful and varied fabrics. It wrestles with visual dynamics normally reserved for the painter: shadow, reflection, opacity, glaze, and color interference.

Hayes’ work holds appeal both formally and intellectually, but her presentation needs some fine tuning. The smaller panels appear as afterthoughts. In this context, the largest panel deserves one’s full attention.

John Torreano’s “Lucky Balls” bear witness to his layered paintings and constructions involving unique materials, but they embody very little of the artist’s fascination with circular motion, spirituality, and astronomy. With no prior knowledge of his work, one might mistake these little orbs for paperweights from a high-end gift shop: beautiful, a bit strange, and mildly humorous. As with Hayes’ work, this problem is due, at least in part, to presentation. Had there been 100 balls scattered across the floor, well, then … maybe.

at the Joseph Nease Gallery