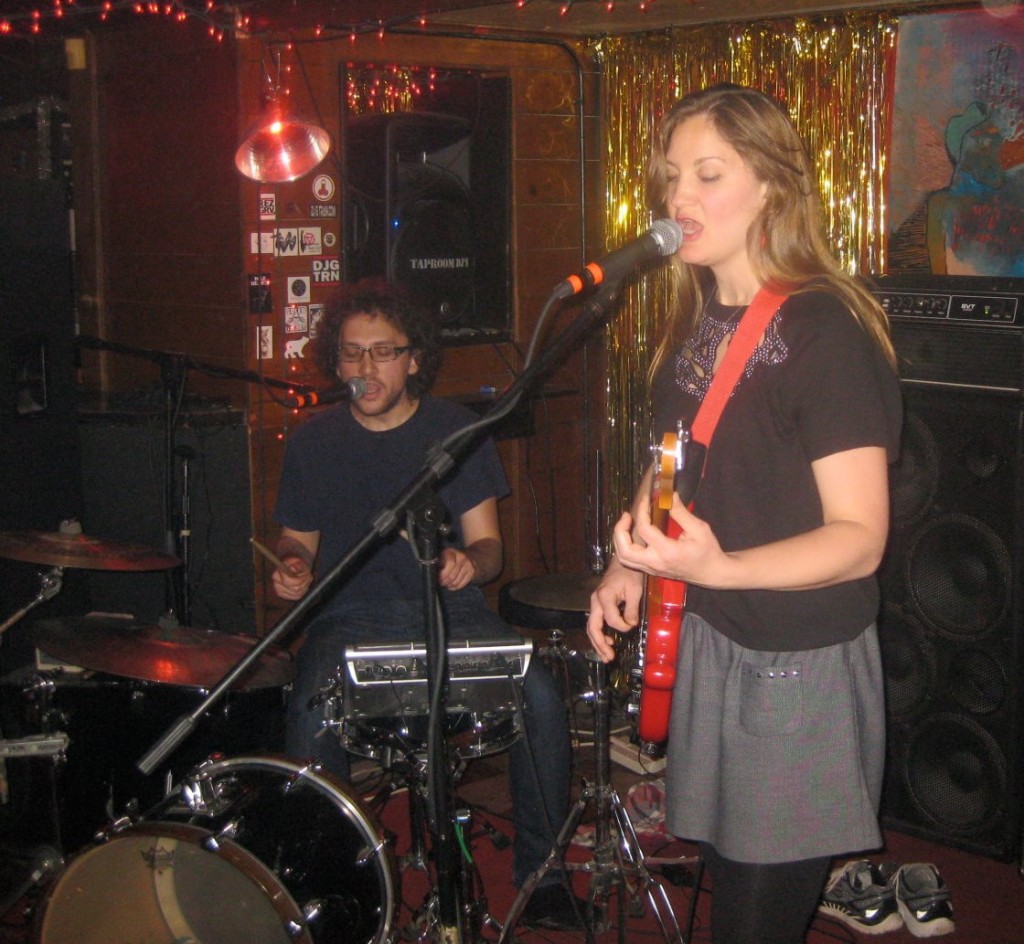 Lawrence rock ‘n’ roll duo Spencer Goertz-Giffen and Braden Young perform as Alien Hellbop. While you might also recognize the couple from their work in the indie-folk act Hello Biplane (of which Alien Hellbop is an anagram), this project sees the pair digging into heavier sounds that reference a bigger sound than the usual White Stripes and Black Keys.

Alien Hellbop’s tone on their new EP, After the Quake, looks more toward late ’80s and early ’90s acts like Pylon alongside modern influences like Wye Oak.

Goertz-Giffen and Young talked to us about the making of After the Quake. We started by discussing the fact that the pair are not only parents of two kids, but have two bands.

“We’re both the songwriters in both of those bands and it makes it difficult to have band practice,” Goertz-Giffen acknowledges. “Now the kids are getting older, I think we’re going to get to this kind of sweet spot where we can practice with them around, instead of out of the house. Braden keeps talking about how we should be in separate bands and how it would be better for both of us.”

Goertz-Giffen says that their relationship was built on playing music together, so it’s hard to conceive let go of that collaboration, despite the fact that it might ease the difficulties of finding childcare. She and Young met when they were both guitar instructors at Richard’s Music in Lawrence. Friends for a long time, they started playing together for Goertz-Giffen’s solo project, when she had an opening slot for Hospital Ships.

“I was scared to play by myself all alone on the stage,” Goertz-Giffen recalls. “I can’t do that. I have to have someone there with me.”

From, there, the pair began playing together more often, became romantically involved, and then developed into Hello Biplane. After Goertz-Giffen graduated from nursing school in 2012, she and Young moved to California, where Goertz-Giffen has family, leaving behind all of their bands besides Hello Biplane.

“It had been a five-piece before we left, but we kept it going out in Oakland and then in Chico,” relates Goertz-Giffen. While in Oakland, Young played in several bands while she focused on her nursing career for a year, but Goertz-Giffen missed playing rock music, having previously played in Lawrence’s the Kinetics.

“I didn’t have my rock outlet anymore,” Goertz-Giffen laments. “Then I got a job in Chico at the hospital there. We didn’t know anybody. We didn’t know a single soul in Chico. And so we decided, “Well, we have to play,” and I was missing the playing rock music, so we just formed a rock duo.”

That duo was Alien Hellbop. As the pair describe it, Hello Biplane was “lighter and a little tamer and we wanted to rock out.” So that’s how it started. There were a series of growing pains as the two tried to figure out how to get a big sound without a bass player. Young considered playing bass and drums simultaneously or something like that, but what the pair eventually ended up going with was using a sample pad for the bass notes.

“All of the bass notes are individually sampled and arranged differently for each song,” Young explains. “I think you get nine patches, so I get nine notes per song.”

“No more,” quips Goertz-Giffen “And you definitely use them all.”

That’s how Alien Hellbop was able to get a three-piece sound out of just two–along with doing a lot of harmonies. With that in place, the pair headed to the then-brand-new PULP Arts Recording Studios in Gainesville in 2019 to record, where Goertz-Giffen’s brother, Winston, a sound recording engineer, was working.

“My brother called and said, ‘Hey, we’ll record you for free, so we can get familiar with everything at the studio, if you can make it down there,” the guitarist says. “So that’s what we did. We were one of the first projects that were recorded at that studio. We didn’t bring any of our own gear, thinking there would be guitars galore and amps galore already set up in the studio and there was nothing, so we threw together some of Winston and Nelly’s–his now-wife–gear to put it together.”

On top of that, Braden had to learn how to play bass guitar for After the Quake, as he hadn’t brought his sample pad. Happily, he was able to make that work and Winston Goertz-Giffen ended up overdubbing the synthesizers you can hear on the EP, as well, while the owner’s nephew, who was working as an intern, watched Alien Hellbop’s kids while they watched The Incredibles and the couple knocked the five-song EP out in one day.

“We laid down the basic stuff in a few hours and then after, that we just tag-teamed,” Goertz-Giffen remembers. “I did the guitars and then I went and took the kids to the public library. And [Braden] did the bass and Soren pooped on the floor in the library.”

The album itself is made up mainly of songs written by Goertz-Giffen, which she and Young chose from a selection of 10-12 pieces they had under consideration. The title of the EP comes from a song she’d written while still living in California.

“There’s not really a theme to the songs that we released, but ‘After the Quake’ comes from talking about our escape plan when we lived in Oakland,” Goertz-Giffen explains. “We lived on the fault line and Braden’s always about like, ‘Be ready for the apocalypse,” and so wrote that the lyrics mostly just to adjust to that.”

Given the events of the past couple of years, it seems startlingly prescient.

On Friday, November 19, Alien Hellbop plays a matinee triple-album release party at the Replay along with the She-Bangs and Lonnie Fisher & the Funeral, who will be releasing Now! Is When and Haunted, respectively. Details on that show here.