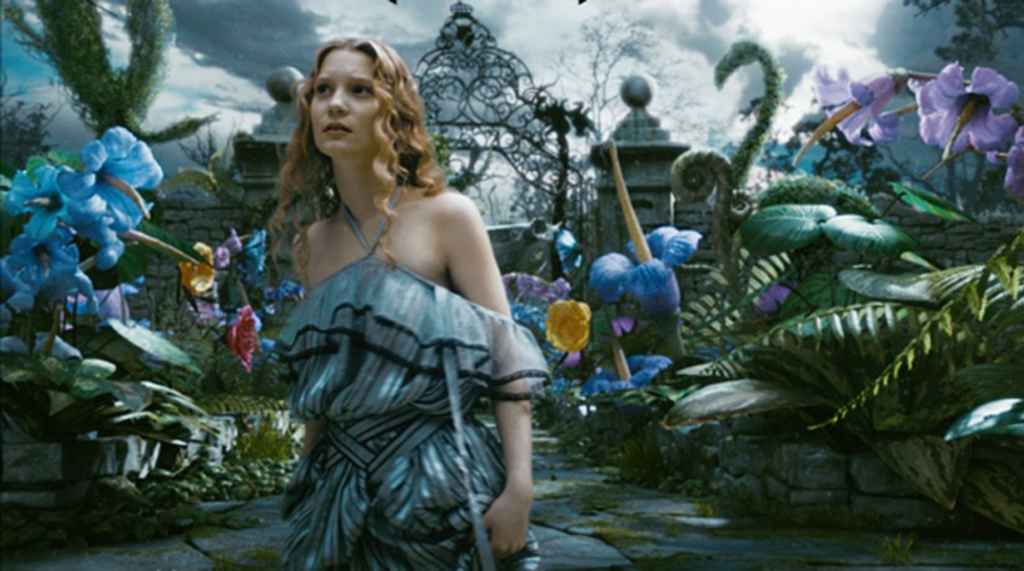 Walt Disney mulled an adaptation of Alice in Wonderland for decades before producing an animated feature in 1951. By all accounts, though, he didn’t much care for the prim little protagonist, let alone her supporting cast of “weird characters.” One wonders what Uncle Walt would have made of his studio’s 21st-century, 19-year-old Alice — a tousle-haired 3-D action figure who not only consorts with weirdos but also decapitates a dragon and drinks a vial of the creature’s glowing puce blood.

The brainchild of renegade Disney disciple Tim Burton — born in Burbank, trained at California Institute of the Arts, employed by the studio as an animator — the new Alice is casually absurd, offhanded in its violence and doggedly on message. The movie is not just three-dimensional but also blatantly programmatic. As scripted by Linda Woolverton (whose previous credits include Beauty and the Beast and The Lion King), Alice is a straightforward allegory of female actualization.

Indeed, Alice (embodied by Australian actress Mia Wasikowska) returns to Wonderland to escape her womanly fate — namely, an engagement to a particularly bilious, aristocratic twit. She’s a runaway bride (who has already refused to wear a corset), and much of what transpires in that moist, warm realm down there (Wonderland is later called “Underland”) demands to be read in specifically feminine terms.

Upon arriving in Wonder/Underland, Alice easily passes the eat-me, drink-me test, growing markedly more relaxed as she accepts her physical changes and adjusts her body image. Deflecting frequent attempts to challenge her identity, Alice may be the healthiest protagonist of Burton’s career, as well as the most conventionally attractive. Something that seems to have interested the director is the manner in which Alice’s outfits adjust to match her drastic physical alterations — the nubile Alice is often in an unself-conscious but unmistakable state of dishabille until, having gained possession of the sacred Vorpal sword, she trades in her frocks for a suit of gender-effacing armor.

Alice may be a babe, but eros is largely sublimated. Amid the digitally conjured white rabbits, Cheshire cats and hookah-smoking caterpillars, Alice does encounter a pair of flesh-and-blood males, but Johnny Depp’s amusing Mad Hatter, his golden eyes matched by an orange fright wig, is scarcely more eligible than Crispin Glover’s thoroughly creepy Knave of Hearts. In any case, Wonderland is a gynocracy, and, rather than romance, Alice is drawn into the rivalry between two sisters. Helena Bonham Carter’s irascible Red Queen (her CGI-created bulbous head accentuated by pursed, bee-stung lips) contends for power in Wonderland with the languid, girly White Queen (Anne Hathaway, who needs little more than death-pallor pancake and near-black lipstick to seem equally freakish).

Presiding over a theme park of total design, waited on by a frog footman and terrorizing her deformed, prosthetic-enhanced courtiers, the Red Queen is by far the more amusing of the two siblings as well as the more dangerous. This castrating mega-bitch unleashes not only the monstrous Jabberwocky on Alice but also her own competitive jealousy. (“Arrest that girl for unlawful seduction,” she screams after her consort Knave makes an ill-advised pass at the temporarily plus-sized Alice.) Of course, as passive and narcissistic as she is, the White Queen is hardly a suitable role model for Alice, either. The sister is going to have to do it for herself — and she does, regularly insisting that Wonderland is actually her dream.

Lewis Carroll’s literal-minded little Alice was something of a logician; Burton’s is comfortable with adult irrationality, although she’s hardly a hippie chick. Neither is his Alice, sad to report, in the least bit psychedelic. (Perhaps as a cost-cutting measure, Alice was shot normally and stereofied in post-production. The resulting 3-D is shallow and largely superfluous — and far less spectacular than that in either Avatar or Robert Zemeckis’ punishing Christmas Carol.)

Like more than one recent movie, Alice seems a trailer for a Wonderland computer game — and it is. The final battle is clearly designed for gaming. So, it would seem, is the character of actualized as well as action Alice. It turns out that back in the U.K., Alice even has a plan that involves expanding her jilted father-in-law’s enterprise to China. Walt’s corporate heirs must be proud.